This summer has forced a new awakening to the realities of climate change. The immense heat in the Pacific Northwest and the incredible floods, such as in Waverly, Tenn., have shaken people. Worried friends and family are sending me notes asking about the future. Colleagues who were “expecting” climate change in the far-off future now realize it is here — and far more significant than they expected.

People often ask me, how do I, personally, cope?

In the 1980s, I had a revelation at a meeting in the Lake Tahoe area. At the time, I was focused primarily on ozone. The Moon was bright and large one evening, and I remember thinking my career would be documenting the decline of our environment. 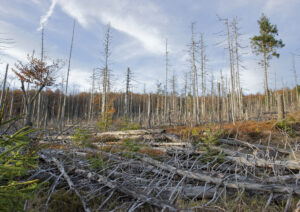 Dead trees in Bavarian forest because of acid rain. (iStock.)

At that time, the ozone hole had been discovered and by the end of the 1980s, the observations that directly linked ozone depletion to atmospheric chlorine pollution were taken and published. These observations, along with some other events, motivated quick action to reduce chlorine pollution. In principle, it seemed likely we would “solve” the ozone problem. It would take decades, but we could manage it.

At the same time, we were starting to study the environmental impacts of a proposed commercial fleet of supersonic aircraft. Remember acid rain? One could envision the global environment’s sensitivity, if not the fragility, to the demands made by many ambitious, energy-consuming humans.

Next came global warming, climate change, carbon dioxide pollution, greenhouse gas pollution – whatever you call it. I had worked alongside Jim Hansen at NASA, and placed climate change into one of many essential compartments of Earth System science. With that narrative distance, it was easy to frame climate change as happening slowly. It might be significant, and we had time to get it under control.

In 2005, when I moved to Michigan, I focused on learning about climate change and how it intertwines with society. My experience in management at NASA taught me that science and technology tend to be the easy parts of a problem. It is the entanglement of the consequences of science and technology with everything else that makes it hard to address the negative impacts of, for example, carbon dioxide pollution. In a fundamental way, it is the entanglement with the power structures of societies and economies. 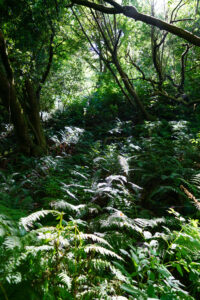 My exposure to students and experts from many fields continues to shape my view of climate change.

Looking back, I see that the early institutional messaging of climate change and its framing by different interest groups cloaked the challenges of a warming planet in ways that narrowed our responses and diminished our effectiveness.

There was, in 2005, a mantra of avoiding “dangerous” climate change and that “danger” emerged as we passed a 2 degree C increase in global average surface air temperature. This mantra had existed since the United Nations Framework Convention on Climate Change in the early 1990s.

Standing in front of classes in 2007, I could not teach this mantra. We already were seeing dangerous changes in the weather (which is how we experience changes in the climate). Any strategies to reduce emissions and limit warming to 2 degrees C or less were notional. We were always trying to hack the trailhead to find that ever-narrowing path out of the underbrush that would “avoid the worse effects of climate.”

In addition, evidence emerged that the conservative nature of scientific institutions and the models they produced had substantially understated how fast ice would be melting; hence, how fast sea level would rise.

There is no evidence-based reason to conclude that we will not experience the accelerating impacts of climate change for decades to come. 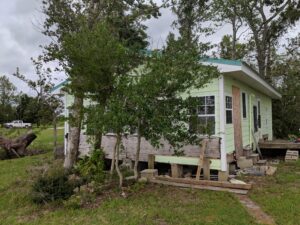 My family has a small cabin on the coast of North Carolina that we built ourselves. My father would acquire abandoned timbers from railway trestles and phone lines and build these absurdly stout cabins on the sounds and rivers. He thought building on the oceanfront was foolish.

Because of its stoutness, that cabin was still intact after Hurricane Florence, and today sits among the detritus of its neighbors. It is disconnected from its utilities, but the building itself could be made viable for 30 more years. Then it is lost.

This reminded me of the 1986 book, Necessary Losses, and how humans experience loss throughout our lives. It is important to our health and well-being to learn how to respond to loss.

There will be loss associated with climate change. Some of this loss is inevitable, as we face substantial sea level rise. Fires and floods will continue to rip through landscapes; the plants and animals that evolved in that landscape in previous decades will be displaced by plants and animals of the future climate. National parks, celebrated for their unique ecosystems, likely will not be able to sustain those ecosystems. 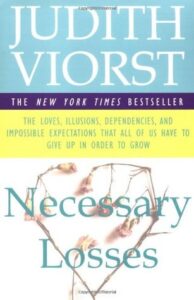 Loss is an inevitable aspect of climate change.

Early in my career, I framed my future as documenting decline. Now, I see opportunity in preparing for the future. The climate will be changing in ways we can anticipate. That we can anticipate how the climate will change places us in a far better position than humans in previous centuries. Knowing that we understand why the weather is changing is far more comforting to me than the alternative.

My framing of a warming planet as both loss and opportunity generates interesting reactions. Some people say I advocate giving up, as though I am asking a person being assaulted to just sit back and enjoy the assault. Those who anchor the institutional message of the narrow path to avoid the most dangerous climate change feel I undermine that message by suggesting a way out. Many more have thanked me for providing a realistic assessment and context in which they can frame their futures, professions, and lives.

In 2019, Seth Borenstein interviewed me about youth and the angst of climate change. I told him about the emotional swings I saw among the students in my classes. The realization that there will be loss — and our inability to have behaved in ways to avoid that loss — is depressing. But the fact that we have knowledge, and the ability to use that knowledge to take some personal control over the future, is empowering.