It’s all there in black & white 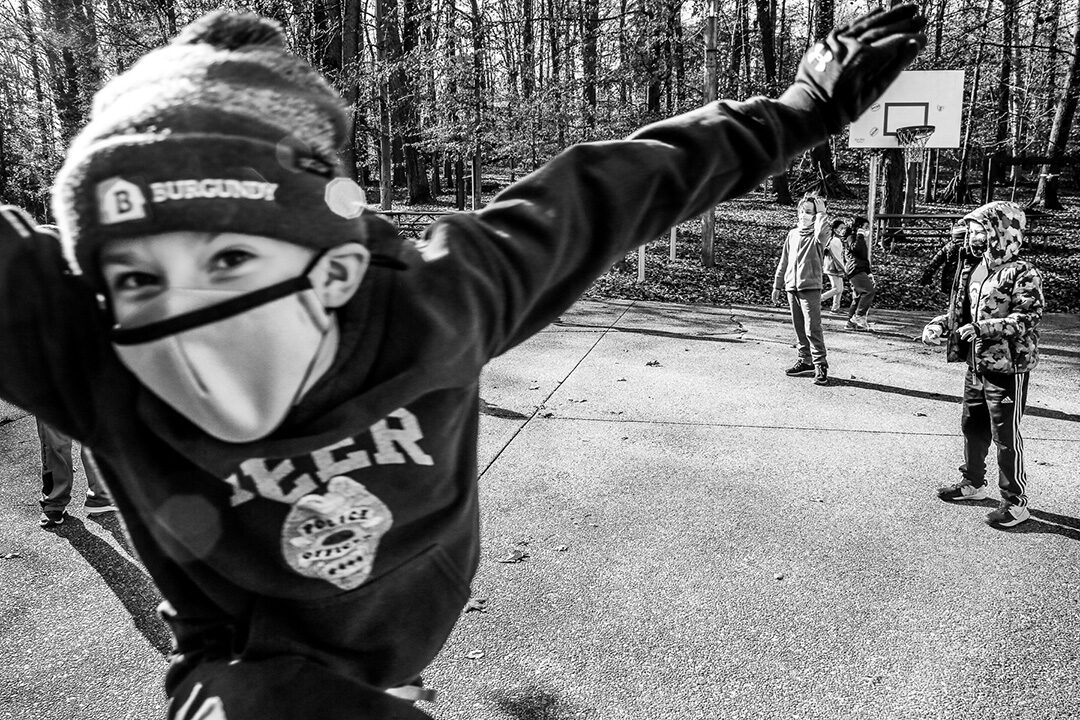 Close up and personal

She also is female, 65, and a type 1 diabetic. So she probably should have taken cover in early 2020 when COVID-19 ravaged the populace and shut down the streets of Washington, D.C. But this multi-Emmy Award-winning producer and photographer has long been a student of human nature. Her experience in broadcast news, social work, and psychology compelled her to get outside. She needed to document humanity’s response to the global pandemic.

Armed with curiosity, courage, and a camera, Fader got a surprising wake-up call. The nation’s busy capital had become an urban wasteland. She realized she had little to fear from the invisible virus or the people who may have had it. For 100 days straight (and beyond), she ventured into the abandoned streets to document the eeriness of lockdown.

“I think the first time I really cried was when I came upon an empty playground blocked with caution tape,” she says. “And that just killed me because I thought, ‘This is life for children now. What is this going to do to their lives?’”

Little did she know the worst was yet to come. 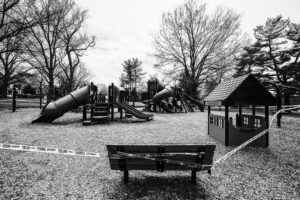 It’s mind-boggling to reconcile that COVID-19, George Floyd’s murder, the U.S. presidential election, and the deaths of Representative John Lewis and Justice Ruth Bader Ginsburg happened within a single year. And then, just six days into 2021, the country experienced a domestic assault on the nation’s Capitol.

But there it is – in black and white.

Fader’s photos appear in the new documentary photography book 2020 UNMASKED (2021). Her work chronicles the year’s historic events as they unfolded in D.C. Fellow photographers Susan Baggett and Victor A. Mirontschuk photographed events in their home cities of Boston and New York, respectively. They, along with photo editor Ari Espay, let the streets tell the story of that tumultuous year, as three urban cityscapes devolved first into desolation and then chaos. Fader says the collaboration among the team was so strong it helped them cope with the burdens and hardships of COVID. 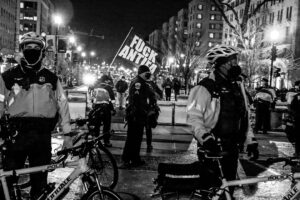 At 350 pages, 2020 UNMASKED is a vivid historical document that feels at once too soon and not soon enough.

The proximity to the action is breathtaking, a little frightening, and something you won’t see on the network or cable news, “because I was there when they weren’t,” Fader says. “This is a different lens, a different way of seeing everything that happened.

“As a street photographer, you have to remain present in the moment; you don’t want to keep putting your head down to your camera to see what you have,” she continues. “And with the protest stuff, you have to work very fast. You have to be acutely aware of what’s happening. If someone starts to yell, that could spark an altercation — and that altercation could turn into something much larger.”

Fortunately, people in the street tended to look out for the little white woman with a camera.

Each of the photographers submitted an essay for the book to contextualize their experience. Internationally acclaimed photographers Joe McNally and Ira Block provided the introduction and final thoughts. Danielle Hernandez was the graphic designer. Additional commentary comes from a teacher, a doctor, an activist, a protester, an artist, a college student, a restaurant owner, and a food distributor. Images are identified on the page only by city, with details in an index at the end of the book. Espay reviewed thousands of photographs by all three photographers and selected a few images that benefited from color. He used them sparingly.

“When you strip away color from the photo, you’re left with the essence and emotion of the image without all the clutter of the color,” Fader says. It was the same with the decision to leave out captions. “We wanted the images to remain pure and not be distracted by any text or verbiage.”

(Listen as Fader explains how she was impacted by photographing the drama that unfolded in the year 2020. The images in the slideshow are all by Fader. Video is approximately one minute.)

One of Fader’s most impactful images, taken at night on Dec. 12, is a horizontal shot that crosses the book’s spine and bleeds to the edge of each page. It captures a line of metro police weighed down by bulky riot gear. The officers’ shapeless forms span the width of K Street in the heart of D.C.’s business district as fuzzy white globes of light float overhead. The menace is palpable.

To make this dramatic photograph, Fader had to stand in the middle of the street, facing those officers. They provided a woefully inadequate buffer between MAGA supporters (behind the police) and anti-MAGA protesters (behind her). Violence could erupt at any second.

“Afterwards, I was thinking, ‘Was I mad to be there?’” Fader says, “but I felt…I felt no fear whatsoever. And I would do it again in a heartbeat.”

Stay with the shot 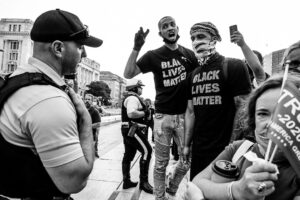 Working with Espay in the editing process reinforced a lesson easily forgotten in the heat of the action. During a July 3 rally in Freedom Plaza, Fader once again encountered a police line that separated opposing protesters. She trained her camera on a woman obscured behind a Trump flag. The woman seemed to be hiding, reluctant to be photographed.

Eventually, one of the woman’s eyes appeared, looking directly at Fader’s lens. She got the shot, which includes an African American man, mask down and mouth open, shouting at a police officer. He is wearing a “Black Lives Matter” shirt. The officer appears resigned to the juxtaposition of extreme opposites.

“You have the BLM folks and the Trump people critical of the police because neither side feels like they’re getting justice,” Fader says. “It’s very, very upsetting.”

Photos like that illustrate how complex police reform is in modern America, she says. The image appears on one page of 2020 UNMASKED. On the opposite page, an African American woman with a baby on her hip holds a sign that reads: “Fear Less Love More.”

“That was one of many portraits I took at the ‘Black Lives Matter Memorial Fence’ by Black Lives Plaza,” Fader says. “The fence surrounded the White House and for four months was a place for people to place their art and protest messages. It was was often Ground Zero for protests by white supremacists.”

Fader befriended the two women, formerly strangers, who protected the fence 24/7. She is now working on a documentary about them. 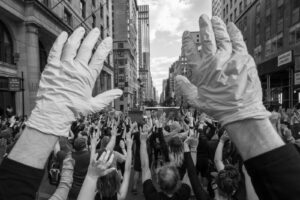 The photographer claims she doesn’t chase danger, though she often found herself in dangerous situations.

On the night of Jan. 5, 2021, she was out photographing at Black Lives Matter Plaza. At about 10 p.m., word came down that a crowd of 200 Proud Boys was working its way toward the plaza. This time, seriously concerned for her safety, Fader asked to be escorted to her car about two blocks away. She had to take a circuitous route to dodge clashes between Trump supporters and Trump protesters, and it took about 2.5 hours to get there, she says.

Other times Fader found hope in the least likely of places, including a 16th Street food distribution center. Many people, mostly Hispanic and non-English speaking, waited for hours, only to be turned away when the supply was exhausted. Not to be stopped by a language barrier, Fader returned with a sign that read in Spanish: “I want to take your picture to show others how important it is to donate food.” Even people who had waited to no avail stopped to interact with her.

“Donate money to a food bank,” Fader says to anyone who feels unable to solve this problem. “That’s the biggest, the best, the most powerful thing you could do.”

A splash of color 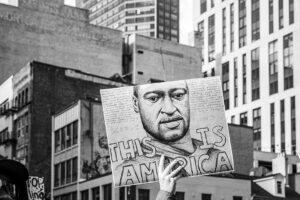 After “months and months of go, go, go,” Fader, Baggett, and Mirontschuk settled in with Espay for the arduous process of editing and indexing all the images for publication. The catharsis was intense, Fader says. To page through the book is to flash back to one of the cruelest and most challenging periods in our country’s history. It comes with a bookmark because the creators anticipate people will need breaks between viewings.

While going through every photograph she provided for the book, “I just broke down and cried because I realized there was so much pain, so much hardship, so many unexplainable things that I saw with my eyes and my camera,” Fader says.

She believes 2020 UNMASKED will serve as a long-lasting historical document and teaching tool. All profits are earmarked for Statement Arts, a New York City nonprofit that helps at-risk high school students enter college.

“I hope the book makes us feel more compassionate in every situation we encounter,” Fader says. “Maybe that’s the benefit of looking at hard-to-look-at pictures. You have to think about them. And maybe you will think, ‘What can I do differently going forward?”

Fader found one possible answer among the masked children she photographed playing in a rowdy schoolyard.

“Their joy and laughter were abundant,” she says. “And it was fabulous to see that nothing was stopping them. I would say, ‘I want to see you smiling with your eyes. Come on, show it to me.’ And you could tell when they were smiling, even with their masks. Seeing those kids was a wonderful thing.”