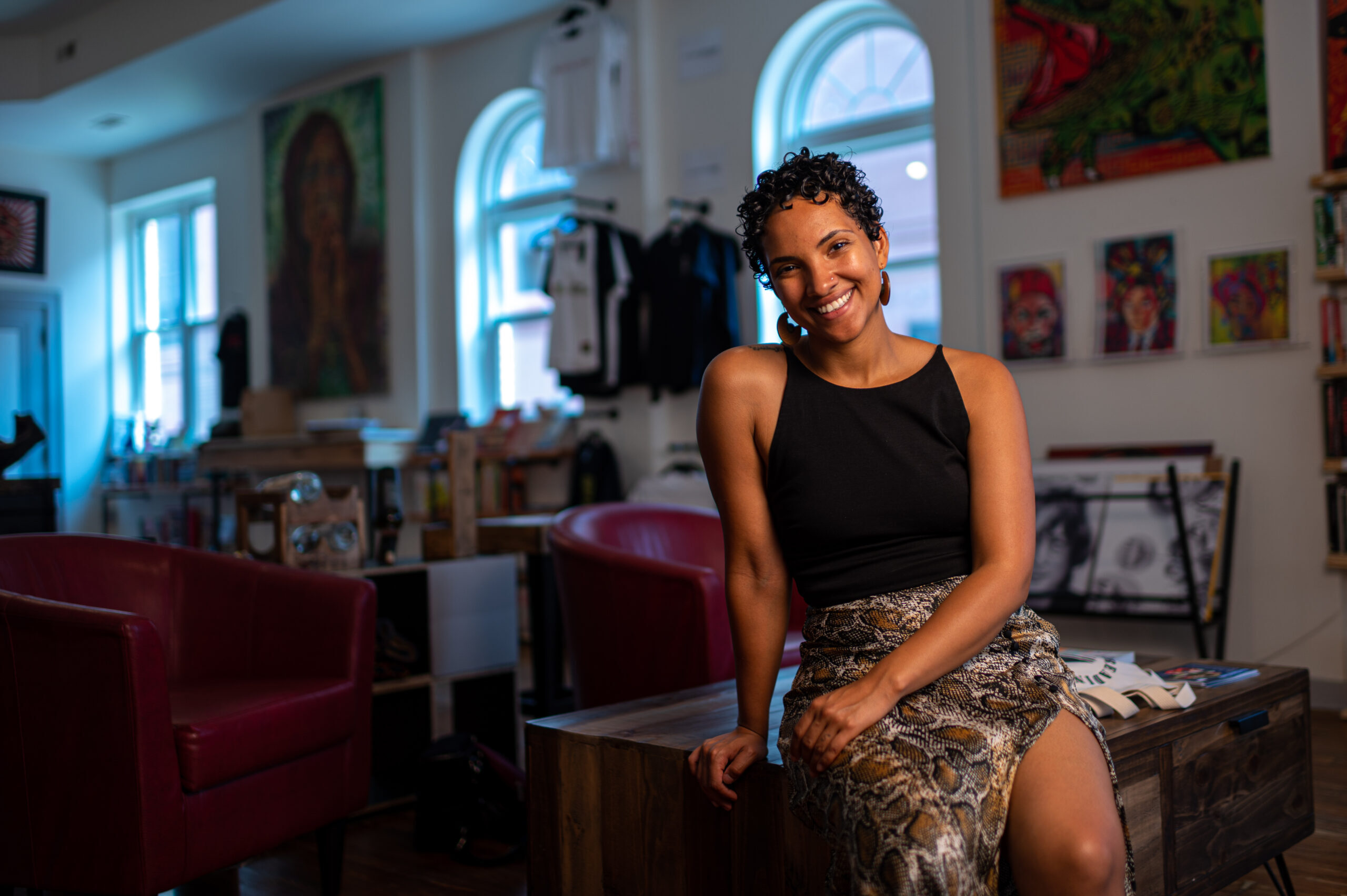 More than just a bookstore

When Kathy Harris needed books written by Black authors for Juneteenth celebrations at work, she knew exactly where to go.

“I knew there was a Black-owned bookstore downtown,” says the Flint native, who works for McLaren Health Plan and serves on its diversity and inclusion committee. “And it’s more than just the bookstore. It’s art and all of the cards. And it’s just wonderful, wonderful to see.”

The Comma Bookstore & Social Hub is a rarity — fewer than 6 percent of U.S. bookstores are owned and operated by Black entrepreneurs.

Its owner, Egypt Otis, BA ’20, is a charming and determined native of the city who just lost her job as a political activist as the pandemic struck in early 2020. At loose ends, the University of Michigan-Flint graduate had time to think about next steps and decided that opening a bookstore would help her leave her mark on the Flint community.

She opened in September 2020 and stocks mostly what she calls “Black and brown books” by Muslims, African Americans, Indigenous and Latinx people. She also gives local artists and nonprofits a space from which to sell their projects such as eyeglasses made from plastic water bottles, paintings, and jewelry.

In addition, she invites community groups in for their meetings and created a children’s book club. She hosted a Juneteenth event at the store to bring historical context to the day and to celebrate freedom with readings, live music, and youth programs.

“I am a Flint resident and I’m an Afro-Latina woman, too, so I’m very proud of my identity,” she says.

A sense of identity

Before opening the bookstore, Otis was a social worker, a community organizer, and political activist. She’s a member of the Governor’s Task Force on Child Abuse and Neglect and on the state’s Foster Care Review Board and is a new board member of the Latinx Technology Center.

“Everything we’ve done in the store is geared toward helping people, whether it be through making sure we have representation on those bookshelves so people can feel a sense of identity or whether it be through creating platforms for local entrepreneurs and creatives and artists,” she says. 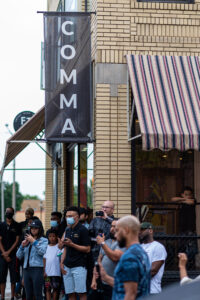 Otis came to UM-Flint as a nontraditional student who was working full time and parenting her young daughter. It was hard balancing those roles, she says. She found a mentor in Peggy Kahn, professor emerita in political science.

“I had a department of people who encouraged me. Peggy Kahn, who I still consider as a mentor today, really invested in me and challenged me, which is something I was missing: to think differently about not only the world but myself,” Otis says. “She really introduced me to myself.”

Kahn remembers meeting Otis in 2015 when she took her course on comparative social policy.

“I have seldom seen such persistence and resilience,” Kahn says. “Being able to press through external barriers is a sign of a certain kind of self-confidence.”

And so much of that experience and confidence contributes to the bookstore. Back when she was growing up, Otis’ grandparents asked why she didn’t like to read. The answer was simple: Reading gave her a headache.

While at the University, she recognized the pleasures of reading and acquiring knowledge through her coursework and nonfiction books, and added more fiction novels. And she knew the knowledge had to be shared with others.

“You know, if I could grow this much as a person just from reading this material, imagine what somebody else could do, could be,” she says. “So the bookstore definitely was born from my overall experiences in life, but definitely at the University of Michigan-Flint.” 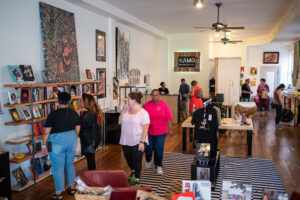 The Comma Bookstore & Social Hub gives local artists and nonprofits a space from which to sell their projects such as eyeglasses made from plastic water bottles, paintings and jewelry. (Image: Eric Bronson, Michigan Photography.)

Otis’ husband and partner in the bookstore, Dorian Jackson, also a Flint native, works with the state of Michigan to provide job placement and training. Jackson and Otis have 10-year-old children from previous relationships who are best friends and often play or read together in the bookstore.

“Comma is a very organic space. It came from a vision that Egypt had of a bookstore and a space and platform for a lot of events and things that hadn’t been taking place in Flint — and to give people an opportunity who have traditionally not had a space downtown, to be able to do a lot of things,” Jackson says.

The couple has a deep appreciation of music and have brought in DJs and musicians to play. Some even recorded performances in the store to share in podcasts and on social media during the worst times of the pandemic when foot traffic was waning.

“And that really kept us very, very relevant,” Jackson says. “I think there’s been a greater embracing of culture especially downtown, not just African American culture, but we worked very closely with the Latinx community and the Asian community.”

Isiah Lattimore, a local artist and U-M alum, stopped by the store recently to visit Otis, who was his model for a mural U-M commissioned him to paint on the Harrison Street Parking Garage that celebrates graduates. Some of his fine art paintings also are on the walls at Comma.

“I couldn’t think of a better place for my art to be. What I love about Comma is that it really does become kind of that watering hole of sorts, where many different people come,” Lattimore says.

Porschia Harris, a Flint native who is now a teacher in Houston, was in town visiting her mom Kathy Harris this summer when they shopped at the Comma Bookstore.

“To be able to come back home and find this store … I was literally just telling my mom, ‘If I live here, like I would totally hang out here because it’s an awesome place to be able to soak in Black literature in a connected space,’” she says.

Harris was excited to see some of the books in stock as they aligned with an African folklore class she taught online this summer.

“It’s Black-owned, and I think it’s awesome to see reflections of ourselves and have a space where you just feel at home and comfortable,” she says. “And it makes us feel empowered.”

Otis says, above all, Comma Bookstore is “a learning space for everyone. We all start from somewhere. You know, you have to allow room for people to grow. So that’s what we do here.”