Meet the man who has everything 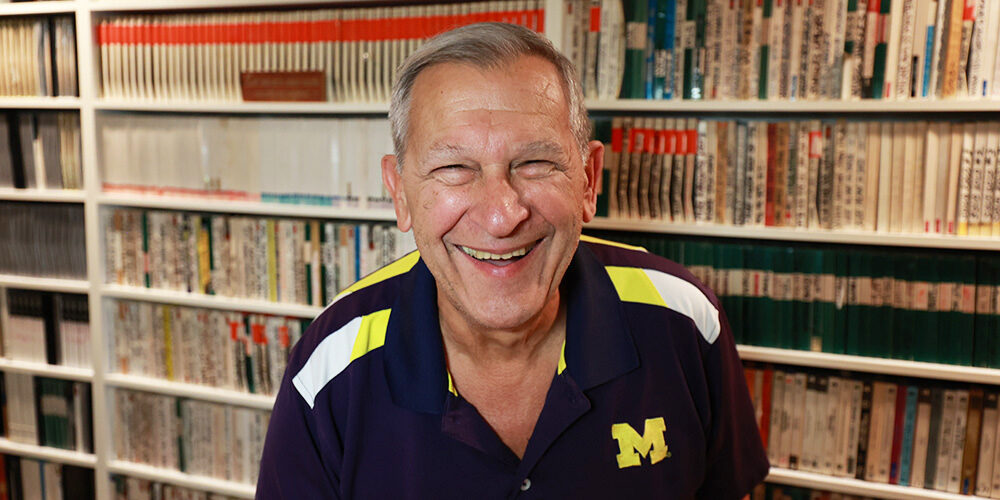 At first glance, Art Vuolo Jr.’s home blends seamlessly into his well-manicured Novi, Mich. subdivision. But an observant visitor will note his house sits atop the highest point in the neighborhood. A small antenna pokes into the blue sky overhead. The old-time radio vet stays in the game by broadcasting to any listeners in close range of his low-power signal.

Radio has consumed Vuolo’s imagination since boyhood. It is a passion rivaled only by his obsession with Wolverine football.

“His official bio says he’s single, but in fact, Art has been married to U-M his entire life.”– John U. Bacon, BA ’86/MA’94
Since 1979, he has melded vocation with avocation and now holds a massive archive of rare moments recorded on every media format one can conceive. The collection is a physical manifestation of Vuolo’s unbridled enthusiasm for audio entertainment and gridiron glory. The archive is stored in his home, lining floor-to-ceiling shelves and consuming all available space in several closets and cabinets.

“I was a junior at Ann Arbor High School in 1962,” he says. “We had just moved to town and rented a house on Henry Street, close to the stadium. It was wild to see all the fans coming into town. I’m a radio fanatic, so I would listen to the Michigan games on WPAG-AM1050. I heard this guy, Bob Ufer, and I just found him to be wildly entertaining.”

Now retired, “radio’s best friend” is busier than ever. He’s gleefully committed to owning the moniker bestowed by nationally syndicated disc jockey Scott Shannon. (The nickname stuck once the trade journal Radio & Records printed it in 1985.) If he’s not fielding requests for clips of Top 40 disc jockeys or industry awards ceremonies, Vuolo is taking calls from sports reporters seeking film on some Wolverine event, field ceremony, or game-day speech.

“I have a lot of moments nobody else has,” he says.

It’s a point of pride and the defining quality of Vuolo’s archive. These days, he’s preparing for his 43rd season recording all the home-game action in and around Michigan Stadium on video. And, oh yes, he’ll be recording the radio broadcasts too.

After Ufer passed away, Vuolo got attached to the voice of Jim Brandstatter, ’72. The radio play-by-play announcer retired at the end of the 2021 football season, and Vuolo is looking forward to the next audio era.

As he welcomes you into the maize-and-blue lair he described on the phone, this Eastern Michigan grad is wearing the requisite U-M polo. (Does he own anything but?) At first, you’re taken aback: The home is clutter-free and immaculate, but a discreet amount of flair is artfully displayed. There’s even a football under a plexiglass box. (Autographed by Jim Harbaugh, it was gifted to Vuolo from the widow of Jim Carr, his dear friend.)

So where is the promised paradise of dusty VHS and Beta tapes, 8mm films, and tangled cords? Where are the reel-to-reel decks, mini-digital videocassettes, and CDs? How about the Betamax machines, DVD duplicating decks, and computers? What about the old TV monitors, mixing boards, and 45 radios he claims to own? 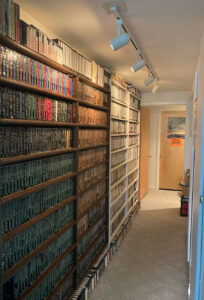 At the bottom of the stairs, Vuolo takes a left, and the motherlode comes into view. Packed shelves line the hallway. All you can see are VHS and Beta cassettes, ¾-inch tapes, and DVDs.

Handwritten and typed labels reveal we are in the radio section of Vuolo’s two-part archive. He started in the business in 1960 while working as a personal assistant to Indianapolis disc jockey Jim Shelton (WIBC). Later, Vuolo worked as promotions director for WNIC in Detroit. Then he started his own company to produce radio guides, video airchecks, and other tools for industry professionals. He also worked as a freelance journalist.

Ever intrigued by advances in video technology, Vuolo brought a camera wherever he went, organically evolving into a regular presence at radio industry banquets, reunions, conventions, and roasts.

He produced airchecks for countless personalities nationwide, forging long-term relationships along the way. (Sirius-XM’s Shotgun Tom Kelly called during our interview.) Before long, Vuolo was the go-to guy whenever someone needed radio-oriented footage for a news broadcast, documentary, memorial tribute, etc.

In 2015, he learned his extensive radio collection will one day live at the National Radio Hall of Fame at the Museum of Broadcast Communications in Chicago.

At the end of Vuolo’s radio aisle, one reaches the “football section” in the collector’s breathtaking archive. Now we’re talking. Lovingly recorded moments from nearly every home game-day experience since 1979 can be found in video formats that run the electronic gamut. Vuolo also has game-day recordings of nearly every radio broadcast.

“The archivists from [U-M’s Bentley Historical Library] came out one day, and I think they want it all,'” Vuolo says. 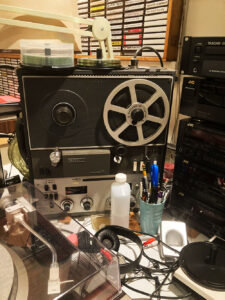 Vuolo’s archive is a warehouse of media formats and players. (Image: D. Holdship.)

It’s no wonder. There are shelves and cabinets everywhere you look. Open a closet to find slim filing boxes with hundreds of DVDs organized by game and year. Stacks of electronics crowd around two well-worn workstations. A pair of Bob Ufer LPs, featuring sound recorded exclusively by Vuolo, lean against a wall. He produced the albums in 1977 — they wouldn’t exist without his audio.

Tears fill his eyes as he recalls Michigan’s 1981 Rose Bowl victory – Bo Schembechler’s first with the team — against the Washington Huskies. On the eve of the game, Ufer gave a spontaneous “win this one for the Gipper” speech to the players, and it’s among Vuolo’s most prized possessions.

“Ufer’s got his fists clenched and he’s saying, ‘You’ve got 60 minutes of football and a lifetime to remember,’ and afterward I was thinking, ‘Ain’t no way they lose tomorrow.'”

He calls up the clip on his computer and gets more emotional as it begins to play: “It was his greatest speech ever.”

Vuolo was the only one who hit “record” on a video camera in that emotional moment. Detroit’s three major TV networks had cameras there, he says, but no one realized they were witnessing U-M history. To be fair, a random cameraman actually did get some decent footage, but his audio malfunctioned, he says.

Let me in, coach 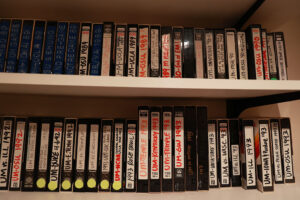 Vuolo’s obsessive devotion to Michigan football started when, as a teenager, he convinced then-head of recruiting Fritz Seyferth, BSIOE ’73, to let him record home games for recruiters outside the broadcast zone. He gradually ingratiated himself to Ufer and other Athletics staffers, and went from scoring one-off press passes to earning season’s passes and a regular place to work, for free, for more than four decades.

“Once I was with Bob, you know, people looked out for me,” Vuolo says. Ufer passed away in October 1981.

These days, Vuolo shoots field action from the photo/video platform on the sixth floor of the stadium’s west side. The prime spot is situated between the 45- and 50-yard lines.

“It’s a privilege to be where I am — on the very top — unblocked by anything,” he says.

When he’s not on the video platform, Vuolo is working the crowd, camera in hand. He’s interviewing tailgaters, capturing pre-game action and halftime performances, and taping awards presentations that never make it to TV. Or he’s shooting glorious pandemonium on the field, as happened in November 2021 when U-M beat Ohio State.

But as soon as the excitement is over, Vuolo is back home editing and archiving.

Better than being there?

Available product is listed on Vuolo’s website. He also includes other short programs about current events unrelated to sports (9/11, the Highland Park, Ill., shooting, etc.), in which he compiles a record of the coverage from radio and TV news outlets. It’s just in his DNA to document these things, he says. 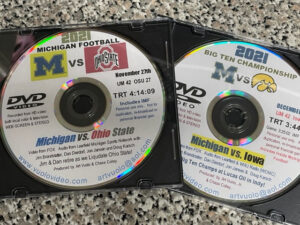 With Michigan Athletics’ permission, Vuolo services a small list of clients that receive his gameday compilations. He says he doesn’t make a profit and invests all proceeds back into production, packaging, and mailing expenses. (He also pays for a premium parking spot a block from the Levine entrance to Michigan Stadium.)

As he preps for the September 3 contest against Colorado State, Vuolo is considering an exit strategy. Perhaps he’ll put his camera down at the 45- or 50-year mark, he says. But he would hate to miss anything.

In 2016, Vuolo received the coveted Yellow Jacket Award, presented by the Bob Ufer Quarterback Club. Vuolo had to remove his headphones and come out from behind his video camera to accept the surprise accolade.

At the time, author John U. Bacon, BA’ 86/MA ’94, said to the athletes and coaches assembled in the room, “A century from now the reason students will know who you are is due to Art Vuolo, who has forever preserved the history of Michigan Athletics.”

When asked about his favorite part of game day after recording all these years of action, Vuolo doesn’t blink.