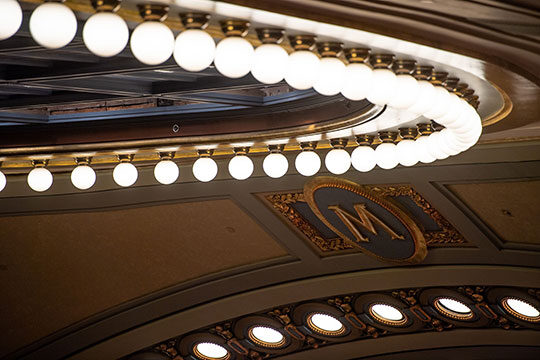 Whew, what a year, eh, Wolverines?

It’s time to regroup, recharge, and celebrate all the good things in life. At the very least, I hope you’re preparing for the millionth rewatch of “It’s a Wonderful Life.” The film has a surprising connection to A2, as our lead feature will show. Packing for the Fiesta Bowl? We’ve got a timeless gem of a story for you about the legendary “Let’s Go Blue!” chant. And if you’re just in the mood for an old-fashioned love story about a couple of Wolverines and a wayward wedding band, we can supply that too.

When the weather outside is frightful, Michigan Today has some entertainment options that are quite delightful. So dig into your stocking, grab a warm bowl of homemade Chexx Mix, and revisit some of our favorite stories from years past.

Looking for something to do?

Watch “Miracle on 34th Street,” a holiday classic whose screenplay was inspired by an original story by Valentine Davies, BA ’27. Davies also wrote a short novel to cross-promote the picture. He won the 1948 Academy Award for Best Writing, Original Story.

Get a ticket to the musicals “Dear Evan Hansen” and “A Christmas Story,” with music and lyrics by School of Music, Theatre & Dance grads Justin Paul, BFA ’06, and Benj Pasek, BFA ’06.

Step inside a time machine and take a vivid look back into the everyday experience of 19th- and 20th-century Michiganders. The real-photo postcard collection at U-M’s Clements Library captures nearly every aspect of life in every county in the state, from mining and agriculture to domestic life, leisure, and portraiture. You can contribute to a super cool crowd-sourcing project by helping tag the images for easy sorting. You won’t believe what’s in there!

Gather around the hearth and reread your favorite Robert Frost poems aloud. Did you know Robert Frost was a poet-in-residence at U-M in 1921, 1922, and 1925? He wrote his most famous work, “Stopping by Woods on a Snowy Evening,” during the summer between his first and second Ann Arbor sojourns. 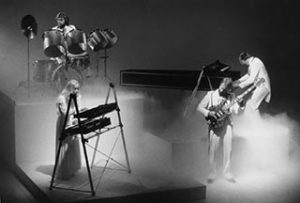 Davis on drums in the original Mannheim Steamroller. (Image courtesy of Chip Davis.)

Reread F. Scott Fitzgerald’s “The Great Gatsby” or dive into Ernest Hemingway’s catalog. “Listen in, Michigan” opens the archive of Esquire founder Arnold Gingrich, BA ’25, who hired freelance work from both American icons. The correspondence is enlightening, and so fun to hear.

If you missed Handel’s Messiah presented by the University Musical Society at Hill Auditorium, start planning for next year. Till then, watch this incredible documentary “A Space for Music, A Seat for Everyone” about the history of Hill.

Get ready to cheer. “Let’s Go Blue” is the classic call to action that always motivates our Wolverines to compete at their highest level. Learn about the cheer’s origin and let’s hope it buoys our team all the way to the top this championship season.

Watch “It’s a Wonderful Life,” featuring longtime Ann Arbor resident Virginia Patton Moss, the film’s unexpected villainess. Her brief but impactful arrival on the scene as George Bailey’s new sister-in-law throws a massive wrench into his plan to escape the mundanities of his hometown.

Do you love those corny Hallmark movies? We had a real-life one play out among New York strangers — who happened to be Wolverines — a few holidays back. Revisit #lostring #foundring #maizeandbluemiracle, one of the sweetest small-world stories ever to take place in Brooklyn.