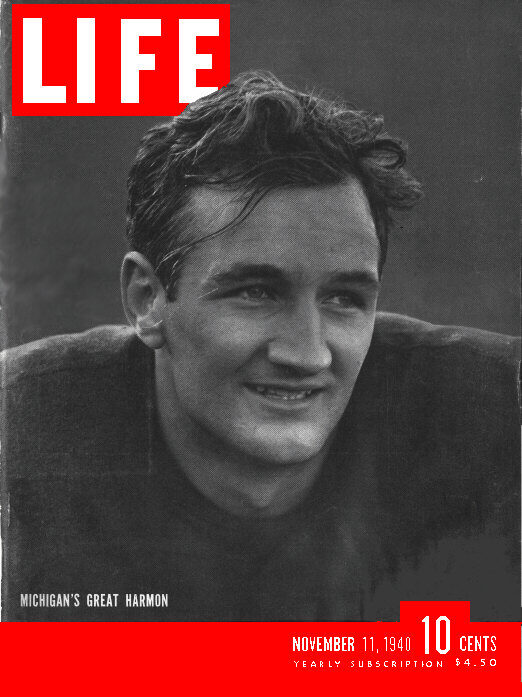 The odds were against him, six to one, but if Tom Harmon didn’t do something, they would all die.

On football fields in the late 1930s, Tom had pioneered a risky technique called “running the rapids,” turning directly into trailing defensemen, stopping them in their tracks, then racing by. Now, piloting his P-38 fighter over China, he reacted the same way. His famed commander, General Clair Chennault, later wrote that “oblivious to his personal safety,” Harmon turned his craft directly into the half-dozen Japanese Zeros that had suddenly appeared above him. He raced into their midst, firing away. It worked. The group split up as this crazed plane spewed bullets at them.

Harmon’s was one of four P-38s protecting a flight of American bombers. It was October 30, 1943—the middle of World War Two. Harmon was one of the bold American pilots who took on the Japanese in the skies over occupied China. The skill and bravado of a fighter pilot came naturally to Harmon. On the ground, as a University of Michigan football star, he was fast, brave and strong: quite possibly the best college football player ever.

His talent was so overwhelming (and he was so handsome) that he earned the adoration of people who’d never watched a down of football in their lives. In 1940, Harmon had appeared on the cover of Life magazine, over the caption “Michigan’s Great Harmon.” Time magazine had put him on its cover the year before. After graduating he starred in a Hollywood movie, “Harmon of Michigan,” about himself. His fans couldn’t get enough of him.

When he enlisted in the US Army Air Forces, his exploits made for inspiring stories back home. But fame also made him a target: killing or capturing him would be a Japanese propaganda coup.

In any case, his celebrity couldn’t help Harmon now. Three of the Zeros headed toward the American bombers. Meanwhile, he snuck up under a Zero and opened up his guns. The canopy of the Japanese fighter sheered away, its engine burst into flames. The Zero spun out of control, free falling toward the ground, trailing fire and smoke. Harmon pulled up, looking for another target. The dogfight was roaring some eight thousand feet above the Yangtze River, about 350 miles into Japanese-occupied China. It was a cool, clear Saturday morning, good visibility. He soon found another target.

As a Zero climbed from a lake below, Harmon plunged in on it and fired. A chunk tore out of the Zero’s left wing then–Ba-boom–it blew up. It was Harmon’s third kill of the war.

He had no time to celebrate. From nowhere, three shots tore into his P-38. One clanged off the armor plating behind him. Another banged off the armor under his seat. The third bullet shot between his legs, igniting the gas line, blowing his famously fleet feet off the pedals and ripping off most of his pants. He reached down, frantically patting with his hands to exterminate the flames searing his legs. The console exploded. His cockpit instantly became an inferno. Harmon was on fire, his plane free-falling earthward. With his left hand he painfully loosened his seat belt, jettisoned his canopy, and was immediately sucked out into the open air, into the dogfight.

Harmon panicked. He yanked his ripcord; the parachute jerked open. Far too soon. He was five thousand feet in the air, in the middle of a 10-plane dogfight, a free-floating, defenseless target under a billowing white bullseye. Zeros strafed his chute. He hung his head down over chest and played dead. And he prayed. Oh, did he pray.

Years later, Thomas Dudley Harmon would recall those harrowing moments in his autobiography, “Pilots Also Pray.” Harmon grew up in Gary, Indiana, the youngest son of a steel mill security guard. He worked his way through Michigan in the late 1930s while building his outstanding football career.

By his junior season, in 1939, he appeared on the cover of Time, which reported he was a “gregarious, lantern-jawed six footer with a Tarzan physique” who runs “with the power of a wild buffalo and the cunning of a hounded fox.” He was touted by sportswriters as “the Michigan maestro,” “the wily Wolverine,” and “triple threat Tommy.” And the six-foot, 195-pound running and defensive back, passer, and kicker actually exceeded the hype.

Launching his senior season against California at Berkeley, he caught the opening kickoff and ran it back 94 yards for a touchdown. On his first carry from scrimmage he scored on a run of 86 yards, then twice more from 70 and 65 yards away. One Memorial Stadium spectator, a fellow Irish Catholic football enthusiast, John F. Kennedy, later said that one of his top sports experiences was when “I saw Tom Harmon score 21 points…in the first half against California.” Harmon was so unstoppable that Life devoted a full page to pictures of an inebriated Cal fan who, frustrated that no player could take Harmon down, jumped onto the field and tried to tackle him. Like Cal, he failed. Footage of the incident led newsreels worldwide, making him internationally famous.

But it was in his last game as a Wolverine that Harmon gave the most extraordinary all-around college gridiron performance ever. Against Ohio State. In Columbus.

Playing on a rainy day and a muddy field, Harmon scored two rushing touchdowns, threw for two passing touchdowns, kicked four extra points, intercepted three passes and ran one of them back for yet-another touchdown, returned three kickoffs for a total of 81 yards and punted three times for a still-record average of 50 yards. In the process, he broke the all-time college scoring tally of Illinois’ fabled “Galloping Ghost,” Red Grange. As he came off the field with 38 seconds left, the 73,648 rain-drenched Ohio State fans made a remarkable gesture that would be impossible to imagine today: they put aside their partisanship and gave the man who’d scored 34 points of the 40-0, then-worst-ever trouncing of their beloved Buckeyes a shouting, screaming, and standing ovation, and then mobbed him, shredding his jersey.

Yet now, as he floated down into China, Zeros were trying to shred his parachute. The lake below came closer closer closer, and then stopped. His chute had caught in a tree.

Despite facing a death sentence ever since helping Doolittle’s Raiders survive after bombing Tokyo the year before, Chinese guerrillas cut down and rescued the severely injured Harmon.

Harmon had already survived a plane crash earlier that same year, when he ditched the bomber he was piloting during a tropical storm over South America. The only survivor, Harmon dragged himself for four days through the forest to safety, refusing to let himself drink a drop of water for fear that contaminants would sicken him when he needed his strength. It had been an astonishing display of will.

But what happened in China was even harder. In what Harmon would call the Chinese version of the American Underground Railroad, over the next 34 days he was stealthily carried back to Allied lines. His physical exam tells the tale. In it, Flight Surgeon Major John Burns concluded by saying,

“Thus, injured, with extensive burns which had become infected, at times delirious, suffering from shock and the weakening effects of loose bloody bowel movements, without adequate clothing or food, having no medical attention and traversing the expanse of the vast interior of China in unsanitary conditions where disease is rampant, Lieutenant Harmon managed, with his magnificent fortitude and what must have been prodigious stamina, to carry on until he was at long last delivered into the hands of his Commanding Officer at base.”

He was awarded the Silver Star and a Purple Heart.

After the war, Harmon played briefly for the Los Angeles Rams, but his injuries had robbed him of his speed and power. He soon entered the career he’d always wanted, as a sportscaster, and he married his movie star wife, Elyse Knox, in Ann Arbor’s Grace Chapel. In a stylish tribute to her war hero husband, she wove part of the parachute that saved him into her wedding dress.

When Harmon died in 1990, a Los Angeles Times reporter noted that Harmon had “married a gorgeous movie star and they had the most beautiful children this side of ‘The Sound of Music’ cast.” Given Harmon’s devotion to his family, it’s a fitting tribute that most people know him today because of his accomplished children and grandchildren. Harmon’s son, Mark, quarterbacked at UCLA before becoming an actor; he stars in CBS’ “NCIS: Naval Criminal Investigative Service.” Tom’s oldest daughter, Kris, married teen idol and singer Ricky Nelson and appeared with him on his parent’s long-running 1960s family sitcom, “The Adventures of Ozzie and Harriet.” His youngest daughter, Kelly, was the WRIF girl, the photogenic face of the popular Detroit rock station. His sons-in-law included renegade automaker John DeLorean, and among his grandkids are actress Tracy Nelson and the singing duo The Nelsons.

The New York Times called Harmon an “All-American football player, magazine cover boy, newsreel idol, Heisman trophy winner, war hero, author, broadcaster, and movie star. He was a man for his times–all of them.” The L.A. Times eulogy mourned that “he takes an era with him” and “helped football become the big time that it is;” that “his habits were beyond reproach. He radiated dignity and reserve.”

FREDRIC ALAN MAXWELL, '79, writes most of his pieces in what he calls the "quiet, reverent, oak-paneled Sterling Writers Room of Portland's fine Central Library," named in honor of the late decades-long newspaper editor Donald Sterling, Michigan class of 1908. He may be reached at fredricalanmaxwell@gmail.com.
Social
Share on: Share on Twitter Share on Facebook