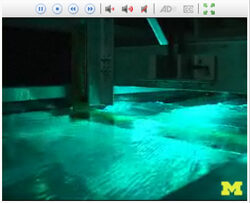 Slow-moving ocean and river currents could be a new, reliable and affordable alternative energy source. A University of Michigan engineer has made a machine that works like a fish to turn potentially destructive vibrations in fluid flows into clean, renewable power.The machine is called VIVACE. A paper on it is published in the current issue of the quarterly Journal of Offshore Mechanics and Arctic Engineering. 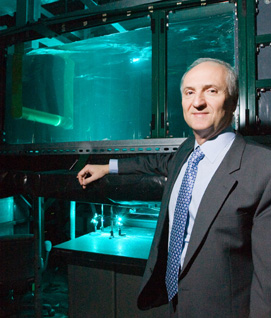 Michael Bernitsas, professor in the Department of Naval Architecture and Marine Engineering, stands before a prototype of his VIVACE hydrokinetic energy device. (Photo: Scott Galvin)

VIVACE is the first known device that could harness energy from most of the water currents around the globe because it works in flows moving slower than 2 knots (about 2 miles per hour.) Most of the Earth’s currents are slower than 3 knots. Turbines and water mills need an average of 5 or 6 knots to operate efficiently.VIVACE stands for Vortex Induced Vibrations for Aquatic Clean Energy. It doesn’t depend on waves, tides, turbines or dams. It’s a unique hydrokinetic energy system that relies on “vortex induced vibrations.”Vortex induced vibrations are undulations that a rounded or cylinder-shaped object makes in a flow of fluid, which can be air or water. The presence of the object puts kinks in the current’s speed as it skims by. This causes eddies, or vortices, to form in a pattern on opposite sides of the object. The vortices push and pull the object up and down or left and right, perpendicular to the current.These vibrations in wind toppled the Tacoma Narrows bridge in Washington in 1940 and the Ferrybridge power station cooling towers in England in 1965. In water, the vibrations regularly damage docks, oil rigs and coastal buildings.”For the past 25 years, engineers—myself included—have been trying to suppress vortex induced vibrations. But now at Michigan we’re doing the opposite. We enhance the vibrations and harness this powerful and destructive force in nature,” said VIVACE developer Michael Bernitsas, a professor in the U-M Department of Naval Architecture and Marine Engineering.Fish have long known how to put the vortices that cause these vibrations to good use.”VIVACE copies aspects of fish technology,” Bernitsas said. “Fish curve their bodies to glide between the vortices shed by the bodies of the fish in front of them. Their muscle power alone could not propel them through the water at the speed they go, so they ride in each other’s wake.”This generation of Bernitsas’ machine looks nothing like a fish, though he says future versions will have the equivalent of a tail and surface roughness a kin to scales. The working prototype in his lab is just one sleek cylinder attached to springs. The cylinder hangs horizontally across the flow of water in a tractor-trailer-sized tank in his marine renewable energy laboratory. The water in the tank flows at 1.5 knots.Here’s how VIVACE works: The very presence of the cylinder in the current causes alternating vortices to form above and below the cylinder. The vortices push and pull the passive cylinder up and down on its springs, creating mechanical energy. Then, the machine converts the mechanical energy into electricity.Just a few cylinders might be enough to power an anchored ship, or a lighthouse, Bernitsas says. These cylinders could be stacked in a short ladder. The professor estimates that array of VIVACE converters the size of a running track and about two stories high could power about 100,000 houses. Such an array could rest on a river bed or it could dangle, suspended in the water. But it would all be under the surface.Because the oscillations of VIVACE would be slow, it is theorized that the system would not harm marine life like dams and water turbines can.Bernitsas says VIVACE energy would cost about 5.5 cents per kilowatt hour. Wind energy costs 6.9 cents a kilowatt hour. Nuclear costs 4.6, and solar power costs between 16 and 48 cents per kilowatt hour depending on the location.”There won’t be one solution for the world’s energy needs,” Bernitsas said. “But if we could harness 0.1 percent of the energy in the ocean, we could support the energy needs of 15 billion people.”The researchers recently completed a feasibility study that found the device could draw power from the Detroit River. They are working to deploy one for a pilot project there within the 18 months.This work has been supported by the U.S. Department of Energy, the Office of Naval Research, the National Science Foundation, the Detroit/Wayne County Port Authority, the DTE Energy Foundation, Michigan Universities Commercialization Initiative, and the Link Foundation. The technology is being commercialized through Bernitsas’ company, Vortex Hydro Energy.The paper is called “VIVACE (Vortex Induced Vibration for Aquatic Clean Energy): A New Concept in Generation of Clean and Renewable Energy from Fluid Flow.” Other authors are Naval Architecture and Marine Engineering graduate students Kamaldev Raghavan, Yaron Ben-Simon and Elizabeth M.H. Garcia.