Black holes are the rhythm at the heart of galaxies

The video above is an animation of the “Russian dolls” effect created by a black hole. The rhythmic eruptions of the black hole create nested “bubbles” that expand outward and burst.

The powerful black holes at the center of massive galaxies and galaxy clusters act as hearts to the systems, pumping energy out at regular intervals to regulate the growth of the black holes themselves, as well as star formation, according to new data from NASA’s Chandra X-Ray Observatory. 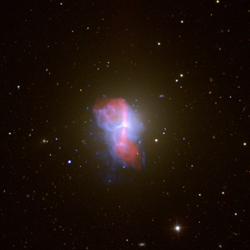 This composite image shows M84, a massive elliptical galaxy in the Virgo Cluster, about 55 million light years from Earth. Hot gas around M84 is shown in a Chandra X-ray Observatory image in blue and a radio image from the Very Large Array is shown in red. A background image from the Sloan Digital Sky Survey is shown in yellow and white. A number of bubbles are visible in the hot gas, outlined with blue X-ray emission. These bubbles were blown by relativistic particles generated by the central supermassive black hole in M84. These particles travel outwards in the form of a two-sided jet. Because smaller bubbles are found inside large bubbles, the impression given by the image is that of Russian dolls, where smaller dolls can be found inside large ones. These nested bubbles provide clear evidence for repeated outbursts from the central black hole. (Credit: X-ray (NASA/CXC/MPE/A.Finoguenov et al.); Radio (NSF/NRAO/VLA/ESO/R.A.Laing et al); Optical (SDSS))

Scientists from the University of Michigan, the Max-Planck Institute for Extraterrestrial Physics in Germany, the University of Maryland, Baltimore County (UMBC), the Harvard-Smithsonian Center for Astrophysics and Jacobs University in Germany contributed to the results.The gravitational pull of black holes is so strong that not even light can escape from them. Supermassive black holes with masses of more than a billion suns have been detected at the center of large galaxies. The material falling on the black holes causes sporadic or isolated bursts of energy, by which black holes are capable of influencing the fate of their host galaxies. The insight gained by this new research shows that black holes can pump energy in a gentler and rhythmic fashion, rather then violently.The scientists observed and simulated how the black hole at the center of elliptical galaxy M84 dependably sends bubbles of hot plasma into space, heating up interstellar space.This heat is believed to slow both the formation of new stars and the growth of the black hole itself, helping the galaxy remain stable. Interstellar gases only coalesce into new stars when the gas is cool enough. The heating is more efficient at the sites where it is most needed, the scientists say.Alexis Finoguenov, of UMBC and the Max-Planck Institute for Extraterrestrial Physics in Germany, compares the central black hole to a heart muscle.”Just like our hearts periodically pump our circulatory systems to keep us alive, black holes give galaxies a vital warm component. They are a careful creation of nature, allowing a galaxy to maintain a fragile equilibrium,” Finoguenov said.This finding helps to explain a decades-long paradox of the existence of large amounts of warm gas around certain galaxies, making them appear bright to the Chandra X-ray telescope.”For decades astronomers were puzzled by the presence of the warm gas around these objects. The gas was expected to cool down and form a lot of stars” said Mateusz Ruszkowski, an assistant professor in the University of Michigan Department of Astronomy.”Now, we see clear and direct evidence that the heating mechanism of black holes is persistent, producing enough heat to significantly suppress star formation. These plasma bubbles are caused by bursts of energy that happen one after another rather than occasionally, and the direct evidence for such periodic behavior is difficult to find.”The bubbles form one inside another, for a sort of Russian doll effect that has not been seen before, Ruszkowski said. One of the bubbles of hot plasma appears to be bursting and its contents spilling out, further contributing to the heating of the interstellar gas.”Disturbed gas in old galaxies is seen in many images that NASA’s Chandra observatory obtained, but seeing multiple events is a really impressive evidence for persistent black hole activity,” says Christine Jones, an astrophysicist at the Harvard-Smithsonian Center for Astrophysics.A paper on the research called “In-depth Chandra study of the AGN feedback in Virgo Elliptical Galaxy M84” has been published in Astrophysical Journal.