Are men hard-wired to overspend? 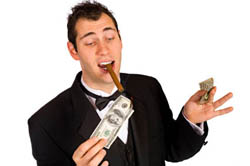 Bling, foreclosures, rising credit card debt, bank and auto bailouts, upside down mortgages and perhaps a mid-life crisis new Corvette—all symptoms of compulsive overspending.University of Michigan researcher Daniel Kruger looks to evolution and mating for an explanation. He theorizes that men overspend to attract mates. It all boils down, as it has for hundreds of thousands of years, to making babies.Kruger, an assistant research scientist in the School of Public Health, tested his hypothesis in a community sample of adults aged 18-45 and found that the degree of financial consumption was directly related to future mating intentions and past mating success for men but not for women.Financial consumption was the only factor that predicted how many partners men wanted in the next five years and also predicted the number of partners they had in the previous five years, Kruger said. Being married made a difference in the frequency of one-time sexual partners in the last year, but not in the number of partners in the past or desired in the future.The 25 percent of men with the most conservative financial strategies had an average of three partners in the past five years and desired an average of just one in the next five years. The 25 percent of men with the riskiest financial strategies had double those numbers.”Men in the ancestral environment were valued if they were good providers. Now we have this new consumer culture, so basically we show our potential through the consumer goods that we purchase, rather than being a good hunter or providing protection,” Kruger said.”It gives an ultimate explanation for why we feel we have to keep up with the Joneses. Especially for guys, our position in the social hierarchy is based on our resources. Economic success has traditionally been good for men’s reproductive success, so men have an incentive to show that they are doing well economically.”So where does the current economic downturn come into play?”It is partially a result of our economic system and recent financial policies, but I really do think that our evolved mating strategies have an influence. Our competition for economic displays drives our consumer economy and culture of affluence,” he said. “In terms of the current mortgage crisis, the findings suggest that one of the reasons why we overextend ourselves is that we’re basically in a status race. We have expectations that spiral upward as people make more money and everyone wants to show that they are better than average.”Read full study