Here’s one more reason to say “shade grown, please” when you order your morning cup of coffee. Shade coffee farms, which grow coffee under a canopy of multiple tree species, not only harbor native birds, bats and other beneficial creatures, but also maintain genetic diversity of native tree species and can act as focal points for tropical forest regeneration. 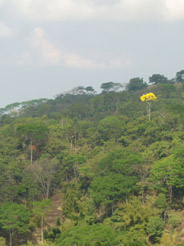 Shade coffee farm from a distance.

The finding comes from a study published by University of Michigan researchers Shalene Jha and Christopher Dick in the Dec. 23 issue of the journal Current Biology.Jha, a graduate student whose main interest is insects, initially wanted to find out whether shade coffee farms nurture native pollinators such as stingless bees. When she began her fieldwork in Chiapas, Mexico, she focused on a particular tree, Miconia affinis, which is pollinated by an unusual method known as buzz pollination. In order to release pollen from its flowers, bees grab hold and vibrate their flight muscles, shaking the pollen free. Non-native species such as Africanized honeybees don’t perform buzz pollination, but native bees do, said Jha, “so I thought Miconia, which requires buzz pollination and is common both in forests and on coffee farms, could be a bio-indicator of how well native bees are pollinating native plants.”As she spent time in the field, however, Jha realized that the story of how Miconia trees spread into coffee farms and how their dispersal affects the tree population’s genetic diversity begged to be addressed before she proceeded with the pollen studies. With guidance from Dick, an assistant professor of ecology and evolutionary biology who studies genetic diversity patterns in tropical tree species, Jha collected and analyzed DNA samples from Miconia trees growing in a network of coffee farms and forest fragments.Typical of many coffee farms in the area, the three farms in the study were clear-cut and burned in the late 1930s and immediately replanted with coffee bushes and canopy tree species, including nitrogen-fixing legumes and fruit trees. Since then, farmers have allowed understory trees such as Miconia to invade because they help prevent soil erosion. The trees spread into the farms when birds and bats carry their seeds from “mother trees.”By performing a genetic analysis, Jha and Dick were able to determine whether trees growing near one another were all siblings from the same mother tree or a genetically diverse assortment from multiple mothers.”We found that clustered trees in the forest were highly related to one another, suggesting that the seeds are not moving far from the mother trees,” said Jha. “In the coffee farms, however, even in close clusters, the trees were very distinct from one another genetically, indicating that the seeds came from multiple mothers.” The difference likely occurs because small, forest-dwelling birds like the chestnut-sided warbler are the main seed carriers in forested areas, while large, ubiquitous birds like the clay-colored thrush spread seeds throughout coffee farms.A concern in agricultural areas is that increasingly fragmented landscapes isolate native plant populations, eventually leading to lower genetic diversity. But this study shows that shade coffee farms, by being hospitable to birds, support widespread dispersal of native trees, in effect connecting patches of surrounding forest.In addition, shade coffee farms may serve as reservoirs for future forest regeneration, as the farms typically fall out of production in less than a century. Given that potential—as well as their roles in connecting habitat patches, preserving genetic diversity and sheltering native wildlife—it is important to encourage this traditional style of agriculture, Jha said.In spite of the trendiness of shade coffee, the enormous demand for java is pressuring some farmers into converting their traditional farms to intensive, industrialized plantations.”A lot of the rustic coffee farms are turning into sun-intensive operations, where farmers cut down the overstory and try to level out the fields so it’s easier to get machines in,” said Jha. “It’s more essential than ever to pay attention to the ecological benefits shade coffee farms provide.”Jha and Dick received funding for the project from the University of Michigan and the National Science Foundation.

Nancy Ross-Flanigan retired from U-M in 2011. While she was employed at the University, she was a writer at Michigan News, the University's central news and information service, Ross-Flanigan was the team's expert in ecology and evolutionary biology, geological sciences, and paleontology,
Social
Share on: Share on Twitter Share on Facebook