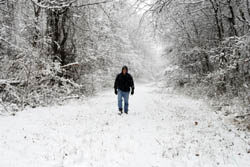 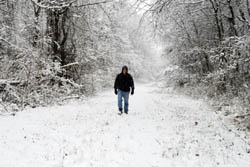 Go outside: It helps improve your focus—even when it’s cold out.University of Michigan psychology research in the December issue of Psychological Science explored the cognitive benefits of interacting with nature and found that walking in a park in any season, or even viewing pictures of nature, can help improve memory and attention.

U-M psychology researchers Marc Berman, John Jonides and Stephen Kaplan found memory performance and attention spans improved by 20 percent after people spent an hour interacting with nature.Researchers believe the findings could have broader impact on helping people who may be suffering from mental fatigue.”Interacting with nature can have similar effects as meditating,” Berman said. “People don’t have to enjoy the walk to get the benefits. We found the same benefits when it was 80 degrees and sunny over the summer as when the temperatures dropped to 25 degrees in January. The only difference was that participants enjoyed the walks more in the spring and summer than in the dead of winter.”Kaplan and his wife, Rachel Kaplan, a researcher in psychology and the School of Natural Resources and Environment, argue that people are far more likely to be satisfied with their lives when their environment supports three basic needs: the ability to understand and explore; to feel they make a difference; and to feel competent and effective.Berman decided to test that theory by sending study participants on walking routes around Ann Arbor. Participants walked on an urban route down main streets and also on a route in U-M’s Matthaei Botanical Gardens and Nichols Arboretum, taking in nature. When participants walked in the Arboretum, they improved their short-term memory by 20 percent, but showed no improvements after walking down city streets.The researchers also tested the same theory by having subjects sit inside and look at pictures of either downtown scenes or nature scenes and again the results were the same: when looking at photos of nature, memory and attention scores improved by about 20 percent, but not when viewing the urban pictures.