One of the most promising new ideas about the causes of cancer, known as the cancer stem-cell model, must be reassessed because it is based largely on evidence from a laboratory test that is surprisingly flawed when applied to some cancers, University of Michigan researchers have concluded.By upgrading the lab test, the U-M scientists showed that melanoma—the deadliest form of skin cancer—does not follow the conventional cancer stem-cell model, as prior reports had suggested.The findings, to be published as the cover article in the Dec. 4 edition of Nature, also raise questions about the model’s application to other cancers, said Sean Morrison, director of the Center for Stem Cell Biology at the U-M Life Sciences Institute. 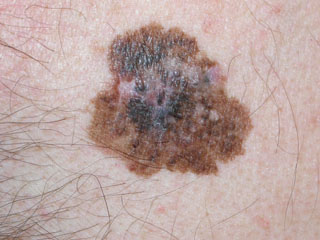 Above: A melanoma skin lesion on the chest of a 45-year-old male patient. The lesion measures 1.2 inches by 1.6 inches. Photo courtesy Dr. Timothy Johnson. 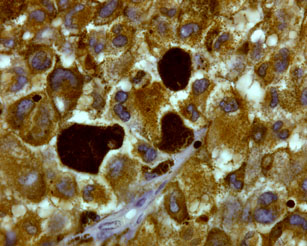 “I think the cancer stem-cell model will, in the end, hold up for some cancers,” Morrison said. “But other cancers, like melanoma, probably won’t follow a cancer stem-cell model at all. The field will have to be reassessed after more time is spent to optimize the methods used to detect cancer stem cells.”The cancer stem-cell model has steadily gained supporters over the last decade. It states that a handful of rogue stem cells drive the formation and growth of malignant tumors in many cancers. Proponents of the controversial idea have been pursuing new treatments that target these rare stem cells, instead of trying to kill every cancer cell in a patient’s body.But in a series of experiments involving human melanoma cells transplanted into mice, Morrison’s team found that the tumor-forming cells aren’t rare at all. They’re quite common, in fact, but standard laboratory tests failed to detect most of them.Scientists previously estimated that only one in 1 million melanoma cells has the ability to run wild, exhibiting the kind of unchecked proliferation that leads to new tumors. These aggressive interlopers are the cancer stem cells, according to backers of the model.But after updating and improving the laboratory tests used to detect these aberrant cells, Morrison’s team determined that at least one-quarter of melanoma cells are “tumorigenic,” meaning they have the ability to form new tumors. The laboratory tests are known as assays.”The assay on which the field is based misses most of the cancer cells that can proliferate to form tumors,” Morrison said. “Our data suggest that it’s not going to be possible to cure melanoma by targeting a small sub-population of cells.”Melanoma kills more than 8,000 Americans each year. The human melanoma cells used in the mouse experiments were provided—with the patients’ consent—by a team from the U-M’s Multidisciplinary Melanoma Program, one of the country’s largest melanoma programs and part of the U-M Comprehensive Cancer Center.”People were looking to the cancer stem-cell model as an exciting new source for the development of life-saving cures for advanced melanoma,” said Dr. Timothy Johnson, director of the U-M melanoma program and a co-author of the Nature paper. “Unfortunately, our results show that melanoma does not strictly follow this model.”So we’ll need to redirect our scientific efforts and remain focused on the fundamental biological processes underlying the growth of melanomas in humans,” said Johnson, a cutaneous oncologist. “And as we pursue new treatments for advanced melanoma, we’ll have to consider that a high proportion of cancer cells may need to be killed.”Morrison and Johnson stressed that the team’s findings do not broadly invalidate the cancer stem-cell model. Cancer stem cells likely do exist in some forms of cancer but are “probably much more common than people have been estimating,” Morrison said.The standard technique used to detect tumor-causing cancer cells in mouse transplants is called the NOD/SCID assay. NOD/SCID mice have defective immune systems. Scientists use the severely immunocompromised mice because they don’t reject transplanted human cancer cells the way normal mice would.However, while the immune system in NOD/SCID mice is impaired, it’s not completely inoperative. The mice lack T and B immune cells but still possess natural killer cells, which attack and destroy many of the transplanted human cancer cells.Morrison’s team replaced NOD/SCID mice with mice that lacked T cells, B cells and natural killer cells—and made a few other improvements to the assay. Using the modified assay, they found that about one in four transplanted melanoma cells formed tumors in the mice.They concluded that previous studies using NOD/SCID mice vastly underestimated the number of tumor-causing melanoma cells, partly because natural killer cells wiped out many of the cancer cells. But once the natural killer cells were eliminated, the “more permissive conditions” allowed many of the transplanted melanoma cells to survive and thrive, the authors wrote.Co-lead authors of the Nature paper are Life Sciences Institute research fellows Elsa Quintana and Mark Shackleton. In addition to Morrison and Johnson, other co-authors are U-M surgical oncologist Dr. Michael Sabel and U-M dermatopathologist Dr. Douglas Fullen.The work was supported by the Howard Hughes Medical Institute, the Allen H. Blondy Research Fellowship and the Lewis and Lillian Becker gift.