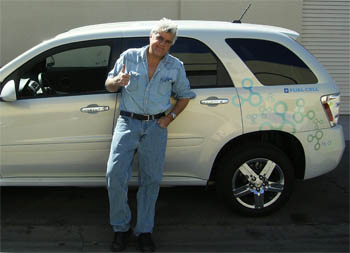 Jay Leno is one of the high-profile volunteers who drive the fuel cell Equinox. Drivers report back to GM about their experiences and problems with the cars—and also help promote them. (Photo courtesy General Motors.)

The Chevy Equinox Angela Coletti sometimes drives home from work is not exactly inconspicuous. Blue-green decals of stylized water molecules spill across the back quarter of the white crossover SUV, representing the source of the hydrogen that powers the fuel cell that makes the thing go.

And the thing does go. The torque generated by the electric motor means instant acceleration, and Coletti, who grew up with performance cars and weekend drag racing, knows that could get her into trouble. So when a police officer flagged her over one day, Coletti figured she’d finally gone too far. He walked up to her window and said, “You know, I’ve read about these online. Could you tell me something abut this technology?” Turns out he picked the right car.

Coletti spends her days teaching people about hydrogen fuel cell vehicles. A 1996 University of Michigan marketing and communications graduate who returned to Michigan for an MBA in 2006, Coletti is a driver relationship manager with General Motors’ Project Driveway in Burbank, Calif.

California has distributed some 60 fuel cell Chevy Equinoxes to celebrities, media, corporate fleets, and people who agree to blog about their experiences. Drivers use the vehicles under real-world conditions, giving the project both exposure and feedback.GM and the other US automakers have, of course, been bludgeoned by the economy, by Congress and by their own blunders. This is the story of one effort to redeem themselves.

If America is ever going to achieve energy independence, it’s going to start with projects like this. Projects where driven, talented people push cutting-edge technology into the real world, then keep striving to make it work right.Industry-wide, change looks inevitable. And given U-M’s historic ties to the auto industry, its no surprise to find Michigan alumni front and center in the efforts at transformation. Alex Keros, like Coletti a U-M and Ross School of Business alum, is a member of Project Driveway’s small crew of engineers, marketing folks, and technicians. Their job is to give hydrogen fuel cell technology a foothold in southern California, in hopes that it will someday soon be parked in every driveway in the country. As a vehicle fuel, hydrogen is more generally associated with the 1937 Hindenburg disaster than with the Chevy Equinox. In fact, Keros—GM’s senior project engineer for hydrogen infrastructure on the West Coast—hears, “But what about the Hindenburg?” so often he’s got a stock response: “I don’t think the Hindenburg was five-star crash tested.”

Safety engineering, is of course, no joke. The complexity of building and testing components—from stations to fueling valves to carbon-fiber-wrapped fuel tanks—is one of the reasons you can’t yet trot over to your nearest dealership and buy a hydrogen-fueled car. But safety is just one obstacle of many. The move to hydrogen and other alternative fuels demands remaking America’s transportation infrastructure. The difficulties of building a whole new way to fuel vehicles—from making the cars themselves to establishing fueling stations to moving supply to ensuring safety—are massive and daunting.

“People think this is all new technology, but we’ve actually been working on this since the 60’s. This is the fourth-generation vehicle,” said Coletti. “We’re very committed to bringing a production model to market. We think the technology is going to be ready by 2010. Will you see it in an Equinox? I don’t know. But you will see it soon.”

Keros, the hydrogen fuel manager for the West Coast division of Project Driveway, says the Project Driveway team has stayed focused on carrying out the program despite the uncertainty surrounding GM’s future.

“I think everyone knows we’ve got a pretty good thing going,” he said. “The goal is to help GM use this program to springboard into other programs.” 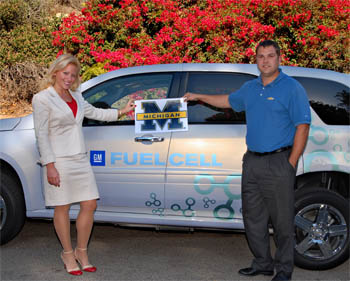 So how do a couple of Michigan natives end up in California, running a fleet of vehicles that could change the auto industry? You might say it’s in their DNA.

Keros’s great grandfather, Gus Keros, started American Coney Island in Detroit in1917. Gus came to the United States in 1912, landed in New York and found his way to Detroit. He tried to get a job at a factory, but the foreman said they weren’t hiring. Gus picked up a broom and started sweeping the floor, but the foreman told him to go away. So he came back the next day and the next and the next, swept the floor, and asked for a job, and finally, after a month, the foreman gave in and hired him. Gus used his savings to buy a popcorn cart and used the proceeds from weekend popcorn sales to rent part of the storefront of what’s now the American Coney Island.

So Alex Keros grew up with an ethic of doing whatever it takes, and of getting the job done without complaint—whether it was doing dishes, putting away stock, or sorting stinky beer bottles. “I think Alex has a lot of (our great grandfather’s) qualities,” said Alex’s brother, Chris Keros. “There’s a lot of ‘don’t quit’ in us.”

Such persistence is essential to remaking America’s transportation infrastructure. The difficulties of building a whole new way to fuel vehicles—from making the cars themselves to establishing fueling stations to moving supply to ensuring safety—are massive and daunting. It’s perfect for a guy like Keros.

“Alex inherently has the ability to kind of change the way people think.” brother Chris continues. “He’s been like that since he was little kid—very persistent. Not in a bad way, but he just put his nose down and went to work. He keeps pushing and pushing and steaming ahead, and hopefully he’ll change the whole world.”

Keros, 31, graduated from U-M’s School of Natural Resources and the Environment in 1999 and spent several years managing the cleanup of hazardous waste sites before returning to Michigan for an MBA in 2006. Through U-M’s Erb Institute for Global Sustainable Enterprise, he landed an internship with General Motors’ fuel cell group, which led to his current job. He now makes sure each hydrogen fueling station—there are more than 25 in California—is set up to make fueling foolproof for drivers. Keros also handles business and access agreements with fueling companies and municipalities, speaks to first responders and acts as a liaison with government agencies and the fuel cell industry.

“We need to make this a great experience for our drivers,” Keros said. “We know there are going to be hiccups… A lot of the customer service is at the end of the day. But you know, at 2 a.m. if something happened we had to go down to the Coney Island. In my mind I was blessed to have a family business to be able to cope with it.”

Like Keros, Coletti was deeply influenced by her father. John Coletti’s team at Ford introduced super-fast production cars—the SVT Mustang Cobra, the F150 Lightning pickup—and the Coletti family spent its weekends at local dragways, racing Dad’s 1968 AMX.Angela’s first job out of college was with Ford Racing, working NASCAR races all over the country. But, as John Coletti points out, performance and efficiency are not mutually exclusive. After graduate school Angela found her niche, teaching people about advanced technology as part of the American launch of the hybrid Ford Escape. Her passion for green tech eventually led her to GM’s Project Driveway.

“It offers me a pioneering challenge,” she said. “You have the opportunity to work with technologies that are making us energy independent and are earth-friendly. The focus in business school at U-M was very much entrepreneurial, and I think with this position you have to have a bit of entrepreneurial spirit. There’s no one telling you how it’s been done before.”

And despite her b-school training, Coletti’s passion for performance is never far beneath the surface. “Angela always made it a point of hers to get into the details,” said John Coletti, “I can’t even tell you the number of times she’s said, ‘Dad tell me what this is about.’ Especially with the fuel cell…. She wants to know why it is the way it is.”

That depth of understanding helps her help her clients—celebrities like Jay Leno, Jerry Bruckheimer, and Fred Armisen—with everything from route selection to fueling. Drivers in the program get a pin number—GM provides the fuel—and the Equinox holds 4.2kg of highly compressed hydrogen gas. It goes 160-200 miles on a full tank, a range that Keros says will make hydrogen close in price to gasoline, but with fewer environmental consequences.

“Basically, it’s seamless,” Coletti said. “You really don’t realize you’re driving a hydrogen vehicle. The only thing you may notice is it’s quieter….”If you can marry being green and not being dependent on foreign oil and have it be a blast to drive… That’s the best.”

“We’re in a small team out here, and we’re given a lot of freedom,” Keros said. “General Motors allows us to make a lot of critical decisions at a field level. In a sense it’s the same thing I did when I was a young adult working for my father at our restaurant. These are amazingly critical decisions, and you realize that responsibility.”