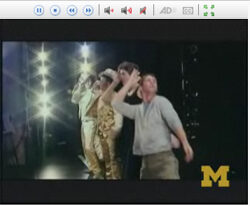 Since the mid 1980s, University of Michigan Musical Theatre alumni have made an impressive and indelible mark on Broadway, from breakthrough roles as leading actors to creating memorable musical compositions to producing blockbuster shows.http://www.youtube.com/watch?v=C6ohYK9hYrs

Now in its 25th year, the program that helped cultivate the talent and foster hopes of many successful alumni is widely recognized as a preeminent training ground for American musical theatre performers.

In several weeks, the proof of that success will be on stage where it all began.More than 50 U-M Musical Theatre graduates from Broadway, national and international tours, film and television will return on March 21 to the University of Michigan for a 25th Anniversary Celebration concert. The performance at Hill Auditorium in Ann Arbor will feature notable alumni alongside current students in a varied program of Broadway hits and numbers from past University productions.

Numbers from “The 25th Annual Putnam County Spelling Bee,” “Jersey Boys,” “Wicked,” and “Avenue Q” will be performed at the March 21 concert, along with songs from U-M undergraduate shows “Big River,” “Guys and Dolls,” “Anything Goes,” “Rent,” and “Candide,” among others.”It’s a one-night only coming together of the past, present and future of the Musical Theatre program,” said Brent Wagner, chair, U-M Musical Theatre Department, who counts composers, producers, casting directors, and agents, in addition to performers, among those alumni winning praise for their work on Broadway, off-Broadway and in touring productions.”

Audiences will see for themselves the impact the University of Michigan is having on American musical productions,” he said. “It’s staggering to think about.”Wagner came from Syracuse University in 1984 to establish the U-M musical theatre program, which stands alongside other the widely recognized elite schools of their kind in the country. Through the years U-M graduates have drawn critical acclaim for their performances on Broadway, including Tony Award nominations for U-M alums Hunter Foster (“Little Shop of Horrors”), Gavin Creel (“Thoroughly Modern Millie”), Celia Keenan-Bolger (“Spelling Bee”), Jennifer Thompson (“Urinetown”), and Erin Dilly (“Chitty Chitty Bang Bang”).U-M alumni have appeared in touring companies of “The Full Monty,” “Cats,” “South Pacific,” “Annie Get Your Gun,” “Mama Mia,” “Ragtime,” “West Side Story,” “Evita,” and many others.

In the rather small, yet breathtaking galaxy of Broadway, word about talent—and successful musical theatre programs—spreads as quickly as a hit show.”Our alumni are our ambassadors,” said Wagner. “The next generation of musical theater performers are watching them, asking ‘Where did they go to school?'”Word is spreading.During the last five years, applications for the program has increased nearly 80 percent to include hundreds of students from around the country.

The U-M Musical Theatre Department is a uniquely structured program within the School of Music, Theatre & Dance, according to Wagner. Collaborative in design and nature, the program draws on faculty from music, theater and dance departments to teach voice, acting and dance. With faculty who worked on Broadway, television and film, the students learn career strategies based on the current realities of professional theater.Another appealing feature, said Wagner, is the dual Bachelor of Arts and Bachelor of Fine Arts degrees, which offers students a more diverse educational experience in courses outside of the music school.

“The very nature of the arts is interdisciplinary,” he said. “We aim to integrate music, theatre and dance into what has become an intensely competitive and specialized field.”

Success, however, isn’t merely measured in fame or longevity.”We look at the students individually,” said Wagner. “They come to us as students barely out of high school, and leave as adults who must begin their professional careers. Being with them during that transition is an extremely special time, and we try to make sure they’re not just ready for a career, but ready for life.”