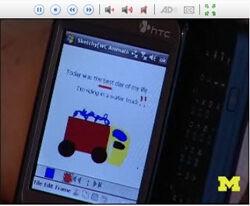 Educational software for cell phones, a suite of tools developed at the University of Michigan, is being used to turn smart phones into personal computers for students in two Texas classrooms.http://www.youtube.com/watch?v=Gfs4ZwVhGto

The software developers are Elliot Soloway, an Arthur F. Thurnau Professor in the Department of Electrical Engineering and Computer Science, the School of Information, and the School of Education, and Cathleen Norris, a regents professor at the University of North Texas.Their Mobile Learning Environment includes programs that let students map concepts, animate their drawings, surf relevant parts of the Internet and integrate their lessons and assignments. It also includes mini versions of Microsoft Word and Excel. It is currently licensed through Soloway’s company GoKnow! to 40,000 users around the world for larger palm-sized computers. Cell phones change the game, though.”This is the beginning of the future,” Soloway said. “The future is mobile devices that are connected. They’re going to be the new paper and pencil.”Cell phones can be powerful computers, Soloway says. They can do just about everything laptops can do for a fraction of the price. And many students are bringing them to school anyway.Matt Cook, a fifth-grade teacher from Keller, Texas who started the pilot project, says the popularity of cell phones got him thinking about how to harness their power for teaching. About half of the students in his class had phones before the project started.Cook was looking for an answer when he met Soloway at an education technology conference last year. He got Verizon Wireless involved to donate phone service. HTC Corp. is donating smart phones. Celio Corp. is donating screens for the phones. Microsoft is providing training.The project equips 53 students in two fifth-grade classes at Trinity Meadows Intermediate School with a smart phone of their own to use around-the-clock for the rest of the school year. Students can’t text message or make calls with them. But they can use the cameras, mp3 players, calendars, calculators and educational software. Cook handed out the phones in late January.”The phones will be seamlessly integrated into my lessons,” Cook said. “I think that right off the bat, this will add a level of student engagement. They’ll be more interested in the lessons because we’re talking in the students’ language. Any time you can do that, you’re a lot more likely to be heard.”He explained how the devices will change his lesson on physical and chemical weathering. He will take the students outside with sidewalk chalk and let them decorate the concrete. Normally, they would then go outside every day to watch the chalk fade over time. Now, students will take a photos of the sidewalk every day and use the Sketchy animation program to create a video of the fading process.Soloway says this type of hands-on, reinforced learning is only possible when each student has his or her own device.”People ask why every child needs a computer and why can’t students just share,” Soloway said. “Well, do you share pencils?”The school district is examining several aspects of student learning with these devices. They’ll determine whether listening to recordings of texts enhances at-risk students’ reading comprehension. They are studying students’ technological savvy before and after the project. The teachers involved will also teach responsible and appropriate use of these phones. Cook and school officials hope to expand the project next year.