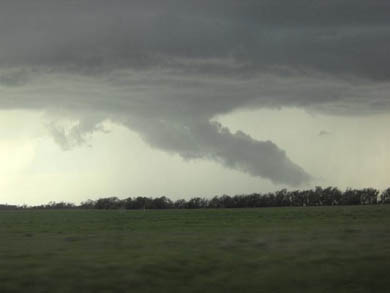 Storm clouds as seen by U-M students on a team of scientists studying tornadoes and other severe weather.

Close to 100 scientists in 40 vehicles are traversing tornado alley this summer in the largest joint effort ever to study twisters and supercell thunderstorms. Six meteorology and geoscience students from the University of Michigan are part of this effort, called VORTEX2.VORTEX2, short for Verification of the Origin of Rotation in Tornadoes Experiment, will explore how and why tornadoes form and why some are longer and more intense than others. One of its main goals is to improve the accuracy and lead time of predictions. Today, the average warning time for a tornado is 13 minutes, and 70 percent of the time, those are false alarms.The Michigan students are part of the Department of Atmospheric, Oceanic and Space Sciences’ (AOSS) annual tornado camp, organized by AOSS professor Perry Samson. The camp allows 5-10 students to follow and study storms for several weeks. This year, it coincides with VORTEX2 and the students are assisting a team from Texas Tech University from May 10 to June 13.The Texas Tech team is using special radar equipment and sensors to gather data about the storms’ boundaries, as well as wind speed, temperature, moisture, and pressure in high wind environments up to 140 mph. The Michigan crew is documenting the storms with video cameras and GPS software, and students are scouting locations for the radar devices.They’re nomads traveling the Central Plains, trying to anticipate where severe weather will strike next. They sleep in hotels and spend many of their days on the road. They do a lot of waiting, parking themselves in places where conditions for a storm are right.As of May 20, they had spent time in Oklahoma, Texas and Kansas. While they had seen some beautiful storms, they had yet to experience a tornado or supercell thunderstorm.”Despite…recent advancements in understanding tornadoes, our understanding of them is still incredibly vague,” wrote VORTEX2 participant Brad Charbaneau on the U-M blog. “If all goes well, the information gathered from VORTEX2 will constitute another major leap forward in our understanding and prediction of tornadoes.”Students on the trip are: Alex Montgomery, a senior Earth systems science major in the Department of Geological Science, from Grand Haven, Mich.; Adam Davis, a senior earth system science and engineering major in AOSS from Canton, Mich.; Erin Kashawlic, a senior earth system science and engineering major in AOSS, from Bloomfield, Mich.; Michael Texter, a senior earth system science and engineering major in AOSS from Middleville, Mich.; and Brad Charboneau, a 2009 graduate in earth systems science and engineering in AOSS. He will attend Texas Tech for a master’s degree in the fall. Joe Merchant, an AOSS alumnus and storm chasing enthusiast is accompanying the students and professor Samson will join them.VORTEX2 is an international team from universities, government agencies and private industry, sponsored by the National Science Foundation and the National Oceanic, Atmospheric Administration. Weather Underground is sponsoring the Michigan students’ blog.