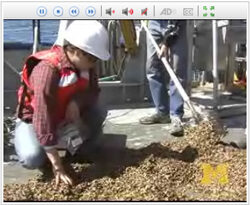 The steel cable whines and the winch groans as it hoists a net crammed with about 300 pounds of fingernail-size quagga mussels over the stern and onto the deck. University of Michigan fishery biologist David Jude opens the net and starts sorting the catch, the result of a five-minute trawl along the bottom of Lake Michigan, about 3.5 miles west of Grand Haven in the lake’s southern basin.

The final count: one fish (a slimy sculpin), thousands and thousands of golden-brown quagga mussels, and a few zebra mussels.

“This is a good example of the kind of abundance of quagga mussels we’re seeing on the bottom of Lake Michigan right now,” said Jude, a School of Natural Resources and Environment research scientist who’s been studying the Great Lakes for more than 30 years.”

A decade ago, there were no quagga mussels in Lake Michigan,” he said. “Now you can find them across the entire lake, and this invasion has happened faster than anyone thought it would. We’re really grappling with some of the changes that are going on in the Great Lakes as a result.”

The Lakes are in the midst of a remarkable ecological transformation, driven largely by the blitzkrieg advance of two closely related species of non-native mussels. Though the zebra mussel is better known to the public, over the past decade it has largely been displaced in Lake Michigan by the quagga, which can thrive far from shore in deep, mud-bottomed waters. Similar changes are underway in Lake Huron and Lake Ontario.

Each quagga and zebra mussel filters about a quart of water a day — and there are billions of them in Lake Michigan alone. The result is startlingly clear water that delights recreational boaters but disturbs scientists like Jude and his colleague Mark Edlund because the water’s been stripped of life-supporting algae. Jude and Edlund spent two days aboard the Laurentian in early May — along with three student research assistants — working on a project funded by the Great Lakes Fishery Trust.

Thomas Nalepa of the National Oceanic and Atmospheric Administration in Ann Arbor is the third co-leader of the study. Jude, Edlund and Nalepa are studying links between the arrival of the invasive mussels and the decline of a tiny shrimplike creature called diporeia, which feeds on algae and which has, for millennia, been one of the pillars supporting the base of the Great Lakes food web.

Make no mistake: The study of diporeia’s decline is no esoteric academic pursuit. Nearly every fish species in the Great Lakes feeds on diporeia at some point in its life cycle. The diporeia downturn is already impacting Great Lakes commercial fisheries and a sport-fishing enterprise valued at more than $4 billion per year.

“Fundamental, amazing change is happening in the Great Lakes right now, and it’s being propagated throughout the food web, from the bottom up,” Jude said in his U-M office before the Lake Michigan trip. “We’re going to lose a big chunk of that sport fishery. That will have a tremendous economic impact and will result in dramatic changes to the fisheries people have relied on in the past.”

Searching for clues in lake sediments

Back on the Laurentian, Edlund is peering into a glass jar filled with water from an algae-trapping net towed behind the Laurentian. Edlund, a U-M alumnus and a former field assistant of Jude’s, specializes in the study of microscopic forms of algae called diatoms.

“Normally, this time of year, that jar would come up absolutely brown with diatom growth in it. Instead, it’s almost crystal clear. There’s no algae growing out here anymore, because the mussels have removed it, and algae are the first cog in the food chain here,” said Edlund, senior scientist at the Science Museum of Minnesota’s St. Croix Watershed Research Station. “When even the algae are changing, then we know that the entire system is really radically shifting. It’s shocking.”

In February, NOAA’s Nalepa reported in the journal Freshwater Biology that Lake Michigan’s diporeia population has plummeted 96 percent over the past decade. Most scientists blame the quagga and zebra mussels, which suck up the algae diporeia need to survive, then expel nutrient-stripped, pristine water.

The death-by-starvation explanation is known to scientists as the food-limitation hypothesis. It makes sense, and most of the evidence supports it, but there are a few inconsistencies. For example, there are places where diporeia have declined dramatically, yet no quagga or zebra mussels are present. There are also places where the mussels and diporeia have coexisted for more than a decade.

In an attempt to resolve these paradoxes, the Laurentian research team collected sediment samples from the lake bottom. The gray-brown mud contains an unbroken record of changes in the lake’s diatom populations dating back centuries.

Like climate scientists who seek clues about past conditions by studying ancient air bubbles trapped in Antarctic ice cores, Edlund looks for evidence of changes in the diatoms by examining the layered lake-bottom deposits. Diatoms are single-celled plants encased in a silica shell, and the lake sediments contain the preserved silica shells of long-dead diatoms.

The various mud layers can be dated, so Edlund should be able to determine how and when the types and abundances of diatoms have changed.”What we’ll look for is how the algae — in particular the diatoms — have changed over the last 40 years,” Edlund said. “And we’ll try to relate that to the decline of diporeia and the arrival of the zebra and quagga mussels.”

Why is it important to determine the exact mechanism responsible for the diporeia decline? It’s clear that the mussels are somehow involved, right?

“Believe it or not, there are still some doubters out there who question the link between the two — doubters in the scientific community as well as among the general public,” Nalepa said. “Also, finding that direct link between the mussels and diporeia is important because some people are now saying, ‘All right, let’s work on trying to restore diporiea to the Great Lakes.’ But it doesn’t make sense to even think about doing that if you don’t know exactly what caused the decline in the first place.”

Water and sediment samples were collected at each site, and two bottom trawls were conducted to search for fish amidst the mussels.

Less algae means fewer diporeia, a primary food source for whitefish and small “prey fish” such as alewives, bloaters, smelt and sculpins. Fewer prey fish leads to a drop in the number of bigger fish that feed on them. Chinook salmon, for example, rely largely on alewives. Lake Huron has already experienced many of the changes expected to occur in Lake Michigan in the coming years. In Huron, the diporeia decline led to scrawnier, less abundant whitefish and contributed to the decimation of the alewife population, which led to a drop in Chinook numbers. Lake Huron whitefish seem to have adapted somewhat, and they now feed on quagga mussels — shells and all.

“We’re still in the explosive-growth stage of the quagga mussel expansion, and we’re in uncharted territory in terms of what’s eventually going to happen,” he said. “But there’s a delay between what the mussels do and how it affects the fish populations, so we haven’t seen the worst of the impacts yet, in my opinion.”

Amid all the gloom, a bright spot has been the resurgence of some native fish species, Jude said. Alewives, in addition to feeding on diporeia, dine on the larval forms of many fish species. In Lake Huron, the near disappearance of alewives is credited, in part, with the rebound of native walleyes, lake herring, lake trout and emerald shiners.”These lakes — Michigan, Huron and Ontario — are going to become less productive, and that translates into fewer fish as well as different types of fish,” Jude said. “So the sport fishermen are probably the people who will be most affected by this.”

For example, because of all the walleyes being produced now in Saginaw Bay, there are a lot of walleyes in Lake Huron. So instead of fishing for Chinook salmon, sport fishermen may be shifting over to walleyes.

“We’re seeing changes at every level of the ecosystem, starting at the bottom and going all the way to the top,” Jude said. “And it’s just really a dramatic thing to be working on the lakes during this era and to be a witness to what’s happening.”