“Won’t it be glorious, mother? I’ll study hard, and win honors, and you’ll be as proud of me as if I were a boy.” 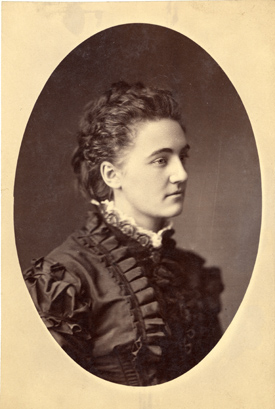 Olive San Louie Anderson’s book ‘An American Girl’ created a tough heroine who proves herself in a man-dominated university much like U-M.

Despite the passing of nearly 150 years, we can glimpse what life was like for the first women at Michigan by way of an extraordinary novel called “An American Girl, and Her Four Years in a Boys’ College,” by a young writer named Olive San Louie Anderson.Anderson, from Mansfield, Ohio, was one of some 30 young women who entered U-M in the fall of 1871, a year after co-education began. She graduated in 1875 and soon afterward drafted a roman a clef about one Wilhelmine Elliott, known as “Will,” a fictional stand-in for Anderson herself, who soldiers through the fictional “University of Ortonville” in a town laced with Ann Arbor street names.After high school,

“…she declined going to a fashionable boarding-school to ‘finish off,’ and heard with longing heart the boys of her class talk of going to college, for she was a good scholar, and had stood shoulder to shoulder with the best boys of the school.”

After winning reluctant approval from her mother, who thinks higher education not only unseemly but threatening to her daughter’s health, Will and the other first-year women encounter thinly veiled hostility from students and townspeople. She overhears a “blustering, bullying” sophomore remark to his friend:

“…what’ll you bet that girl is not going to enter college? …she just looks like it. All I have to say is, it will ruin the institution; the feminine mind can’t stand the pressure, and it will come down to a third-rate boarding-school for boys and girls.”

In town Will endures curious finger-pointing—”I never go on the street without hearing some such remark as—’See, there is one of them; look at her!'” she writes a friend at home—and resentment from so-called “college widows.” These are young women of the town “who have depended upon the students for their ‘chances,’ and who, after angling patiently in the matrimonial sea for years, are often obliged to give up in despair.”Faculty members are divided on the co-ed issue—”‘I can tell,’ she thought, ‘just by the way each professor looks at me, whether he believes in girls going to college'”—but they tend to come around when they see the women perform well in class. Some boys are hostile. When freshman and sophomore men start a rumble on a staircase, Will finds herself in the middle. She writes to her friend:

One sweet-faced boy said, “For Heaven’s sake, Phelps, wait until the girls get out of the way!” but that worthy replied, “Damn ’em, they have no business here anyway, and let ’em take their chances!” I was on the last step hurrying to get out of the crowd, when I was pushed violently against the banisters, making my nose bleed in a most ghastly manner… The girls helped me home, and all the while the martyr-fire burned brightly in my breast… Now, there is not one of those boys but, if you find him out of college, would have run to a lady’s assistance… but, would you believe it, not one of those two hundred and fifty boys offered any help or sympathy, simply because they feel that we are trespassing upon their domains!

Other boys are simply flummoxed. Will’s tutor in Greek, one Dalton, “very orthodox on the girl-question,” soon falls for her in spite of himself, and, in the midst of a tutoring session, abruptly kisses her. She makes short work of him.

“I employed you to teach me Greek, and not make love to me. Everybody says that we come here just to flirt with the boys; and, when we are going along quietly trying to mind our own affairs, you make fools of yourselves, for which we get the blame. Why, such a scene as this just now is enough to throw disgrace upon the whole cause of co-education in its present uncertain state…”

“I—I—did not mean to do any thing wrong; and, if I have, I hope the Lord will forgive me!”

“Doubtless he will, Mr. Dalton; but I think you had better ask my pardon first. I guess we have had enough Greek for the present; so, whenever you are ready, present your bill!”

By Will’s sophomore and junior years, the boys have come around to grudging acceptance, including Guilford Randolf, with whom a romance develops. At first he finds Will “brilliant and all, but so cold and sarcastic and independent.” Soon he is smitten, but trouble develops over Will’s dream of attending medical school. For a time she puts the dream aside, fearing Randolf’s disapproval. Then, when they discuss a future together, she reveals her hopes.

A strong expression of disgust came over his handsome face, as he said: “Do you suppose that I would ever have a wife who had been familiar with all the disgusting details of a dissecting-room? Bah! She would never get rid of it!”

Will felt a hot flush of indignation at this reply… “You have no right to talk to me in that way,” she replied, “and I can’t understand your continued prejudice against professional women… I don’t see how you can treat with disrespect a thing that once lay so near my heart, and which I should have carried out had I not loved you well enough to give it up.”

When a rival for Randolf’s affections warns him that marriage to Will would force him to keep house, the relationship shatters. At graduation, Will is chosen to give an address; she is so eloquent on the right of women to enter the professions that “even the sternest opponents” are persuaded. Randolf repents; Will offers him hope for the future; and the novel ends.D. Appleton and Co. published “An American Girl” in 1878 under the pseudonym SOLA, an anagram of Anderson’s initials. Like her fictional heroine, Anderson hoped to attend medical school but taught Greek and Latin instead. She died in a boating accident in California in 1886.

Her novel, all but forgotten for a century, became an important source for historians tracing the development of co-education. Elisabeth Israels Perry and Jennifer Ann Price edited and annotated it for a new edition that was published by the University of Michigan Press in 2006, where it is available for purchase.