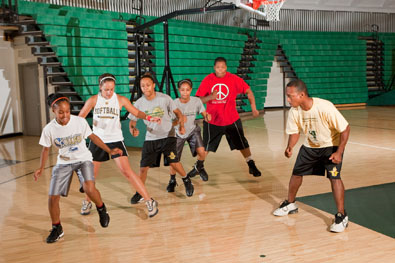 Over the past year and a half, 17-year-old Meagan Strickland spent more time in the hospital than she did on her beloved basketball court. The Brighton, Michigan girl played forward on her high school team and was hoping to play basketball in college. But in January 2008, she ran into another player, bending her knee backwards and badly injuring crucial ligaments. It took three surgeries—with six months recuperation for each—to repair the damage.Strickland is not alone. During the 2005-2006 school year, of the 4.2-million adolescents participating in high school sports, 1.4-million sustained injuries—everything from bumps and bruises to torn ligaments and concussions, according to the Centers for Disease Control and Prevention. The emphasis these days on rigorous programs, where young athletes train extensively, and often play the same sport year-round, overusing muscles that grow weak and prone to injury, has resulted in an epidemic of injuries that can put players on the sidelines for weeks or months, even a year or more, as in Strickland’s case. 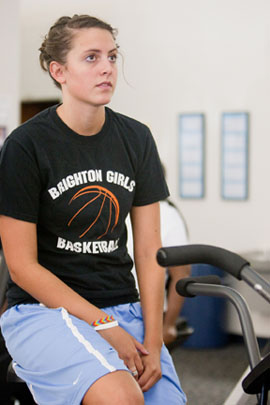 Meagan Strickland of Brighton spent more than a year rehabbing her knees after blowing out ligaments in a basketball game. She now works harder than ever to stay fit and strong in order to prevent future injuries. (Photo: Scott Soderberg, U-M Photo Services.)

Boys’ shoulder and knee injuries tend to happen in basketball, soccer and football; dangerous sports for girls are basketball, soccer and volleyball. Girls, with wider hips, land their jumps differently than boys. Improper landing can cause the knee to pop, tearing the anterior cruciate ligament (ACL), which requires reconstruction through surgery, as well as a long and laborious recovery process. Elizabeth Joy, a family and sports medicine physician at The University of Utah who has been studying ACL injury prevention in female soccer players, said ACL injuries are especially dangerous, since studies show that girls who tear their ACL have a greater risk of premature knee arthritis—with some requiring knee replacements by age 50. “People tend to think of sports injuries as little bumps and bruises, but they carry significant economic ramifications from a pain and disability standpoint,” said David Janda, director of The Institute for Preventative Sports Medicine in Ann Arbor and author of the book, “The Awakening of a Surgeon: A Family Guide to Preventing Sports Injuries and Death.” (Janda did his medical internship and residency at U-M). He said that the number one reason for a trip to the emergency room is from sports injuries, and that roughly two billion dollars in health care costs could be saved annually by preventing these types of injuries. Physicians are taught to be reactive, instead of proactive, he said. But with sports injuries, the key is to identify problems in advance to prevent them from occurring.The good news is that a simple prevention program can significantly help prevent injuries. And the University of Michigan is at the forefront. As part of her rehabilitation, Strickland came to the University of Michigan Health Care System’s MedSport, where staff ran her through paces: lifting weights, pivoting, lunging, jumping and positioning her feet like on the face of a clock to strengthen the muscles around the joint. This conditioning allows her to understand “how her body works, what type of activities put her at risk and how to strengthen and prevent those kinds of injuries,”—helping ensure she won’t have to endure this trauma again, said her mother, Jeanne Strickland.Walking into MedSport, you feel like you’re in a giant training center. Young athletes and weekend warriors alike are jumping rope, rolling on mammoth balls, lifting weights and running on treadmills, supervised by an experienced staff of physical therapists and athletic trainers. Medsport takes a comprehensive approach to prevention and treatment. It’s one of the first university-affiliated programs to combine physical therapy, athletic training, primary care sports medicine and non-orthopedic family care, involving family physicians, pediatricians and emergency room doctors. “It’s a big, vast area, and you need multiple people to take care of the range of problems we see,” said Edward Wojtys, a U-M professor of orthopedic surgery and MedSport’s Medical Director. “We started to recognize something really needed to be done for young athletes, particularly females, since so many were getting hurt,” Wojtys said. “We’re producing a whole generation of young people who by their late twenties and early thirties can’t exercise because of arthritis,” he said. Injury prevention “is really a key component in our efforts to promote physical activity across the lifespan.” 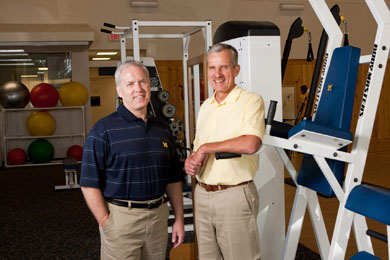 Ronald Zernicke and Edward Wojtys are among the U-M experts who have begun looking at ways to prevent sports injuries before they happen. (Photo: Scott Soderberg, U-M Photo Services.)

Wojtys said the best way to prevent injuries is to become a well-conditioned athlete in top aerobic condition prior to the season. And MedSport focuses on getting there by improving reflex training, coordination and balance. Wojtys said it’s impossible to know how many injuries would have occurred, had students not participated in his program, but he said, “There are a lot of success stories.”Steve Vinson, the head women’s basketball coach at Huron High School in Ann Arbor, is one of them. He contacted MedSport after losing three girls to injuries and wanted to undertake a prevention program before the season started. Last year, 15 girls took part in a four-week impact program with a 20-minute warm-up to master strength and agility. The girls were taught to land correctly and keep the knee out of the vulnerable position, so it doesn’t twist, preventing the ACL from snapping. Following the program, “we didn’t see the same volume of nagging injuries,” Vinson said. Dr. Julie Gilchrist, a medical epidemiologist with the Centers for Disease Control injury center, is focusing on getting more coaches to adopt this type of program, a simple warm-up and post-stretching regime that is easy for kids to do on their own or with a team. An injury prevention program of adolescent girls playing soccer in California found an 85% reduction in injury rates. “So when you have a result that significant, you want to get that into the hands of coaches everywhere,” she said. MedSport is also one of the founders of another University initiative intended to promote a physically active lifestyle: The Bone and Joint Injury Prevention Center, a collaboration between the Medical School, College of Engineering, School of Kinesiology and School of Public Health. Ron Zernicke, a professor of orthopedic surgery and biomedical engineering, and Dean of Kinesiology at U-M, and the center’s director, said he’s looking at the mechanisms of injury, how they occur and how you can prevent them from happening. For example, he said that 30% to 50% of sports injuries are related to overuse, where kids play six times a week, year round, barely taking time to enjoy the activity. Parents often push them too hard, causing overuse of muscles from excess participation in the same activity, he said. “There are a lot of reasons that younger athletes feel pressure to push themselves, like peers and coaches. It’s critical for adults to understand their child is unlikely to become the next NCAA champion, and to realize that over-activity is causing more injury than it’s worth,” Zernicke said. Meagan Strickland isn’t looking to be a champion. She’s just eager to start playing again. And she said the exercises she’s doing to prevent further injuries have really helped her. “This is the best shape I’ve been in,” she said. She’s hoping to be back on the basketball court in time for the coming season.

For more information, go to U-M’s Bone and Joint Injury Prevention and Rehabilitation Center. For more about preventing ACL injuries, go to: www.aclprevent.com