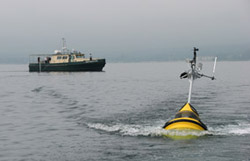 A new environmental monitoring buoy for the Upper Great Lakes Observing System will help researchers at U-M track pollution in Lake Michigan’s bays. It is one of 350 inventions by U-M researchers in the past year alone—a new record. (Photo: Guy Meadows.)

And despite the state’s economic woes, the university licensed eight new startups in the fiscal year that ended June 30, according to the U-M Office of Technology Transfer.”This past year, when we were expecting a slowdown and anticipating three, maybe four, new start-ups, faculty responded—with eight,” U-M President Mary Sue Coleman said Monday in her State of the University address. “In the past nine years, faculty have launched 83 start-ups. That’s roughly one new business, every six weeks, since 2001.”Universities drive economic development,” Coleman said. “Our faculty are looking the recession in the eye and moving forward.”The eight startups include companies that have developed: new treatments for heart failure; miniature, high-speed current probes; a device for early, non-invasive detection of retinal and metabolic diseases; health-monitoring products that interface directly with the human skin; and new tools for searching clinical documents.The 350 discoveries disclosed in fiscal year 2009 surpass the previous record of 329, set two years earlier.Royalty income rose 20 percent to $15.1 million in FY 2009, a record increase. Total technology-transfer revenue for the year, which includes $3 million in equity returns, was $18.1 million. The income will fuel ongoing reinvestments in research, technology transfer and industry-outreach activities.”This past year was difficult for our business and venture partners, so it is especially satisfying to have these performance results reflecting the extent of our economic outreach,” said Ken Nisbet, executive director of the U-M Office of Technology Transfer.U-M researchers filed 151 patent applications last year—an increase of 14 percent over the previous year—and 72 patents were issued. Seventy-eight technology agreements were negotiated with established and startup businesses.Also in fiscal year 2009, the university passed the $1 billion mark in research expenditures for the first time.”These are times of enormous uncertainty and of tremendous opportunity,” said Vice President for Research Stephen Forrest. “By leveraging our $1 billion of research activity, and working hand in hand with all our partners—especially those from industry—we are devoted to reigniting the economic power of our state and nation.”