In January 1921, it came to the attention of Henry Bates, the shrewd and sober dean of the Law School, that the law fraternity Phi Delta Phi (of which Bates himself was a member) had held a Sunday night party attended by several female members of a traveling musical company—”chorus girls,” that is, a phrase which in that era carried a faint scent of scandal, at least when it was used at any distance from Broadway.Dean Bates was at that moment in the midst of secret negotiations for a major endowment from William W. Cook, the millionaire alumnus who, it was hoped, was about to underwrite magnificent new quarters for the Law School. Bates was in no mood for a scandal. So he moved quickly and quietly, ascertaining the facts, then placing 26 of the fraternity’s 33 members on indefinite probation, which meant forbidding them to take part in any campus activities besides schoolwork. No announcement was made, for fear it might interfere with investigations of what would later be called “parties of a far less tame nature given by certain other fraternities.” 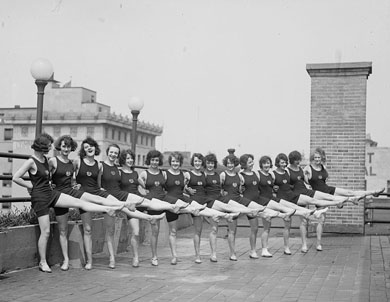 Scandal split the campus when, in 1921, the Law fraternity was found to have entertained chorus girls of the type pictured here. Students later learned that the administration had employed young men and women to spy on students.

There the matter stood for several weeks, until the Phi Delta Phi matter came up in a conversation between four members of another fraternity and Joseph A. Bursley, the new dean of students. Bursley had been appointed by President Marion LeRoy Burton with a mandate to clean up any manifestations of law-breaking and revelry among students who, in good Darwinian fashion, were devising adaptations to the new regime of Prohibition. Among other incidents, a drunken student, resisting arrest, had been shot by an Ann Arbor policeman, though not fatally.One of the fraternity men who sought out Bursley was apparently a campus correspondent of the Detroit Times, the slightly racy paper that was about to be snapped up by the press mogul William Randolph Hearst. Bursley, believing the conversation to be confidential, spoke freely. To his consternation, the Times quickly published a front-page story headlined—in red ink—”Wine, Women and Song Days End at U. of M.” The story reported the punishments of the Phi Delta Phi men and quoted Bursley as saying: “I could have sent them to jail. I could have had them pulled out before the student body and punished them. But that isn’t my job. I sent them home.” An unspecified number of other students were expected to “slide out of town” shortly to escape Bursley’s crackdown, the story said. The dean’s information reportedly had come from a number of sources, including “men who are hired to report student doings to the faculty,” and “a great deal of it has been gathered from young women.”Now Dean Bursley and President Burton had to cope with criticism from both sides: censorious out-staters, always ready to seize on evidence of iniquity at the big university, but also students outraged at the news that Bursley was apparently employing a network of spies, co-eds among them. Bursley, sputtering over the disclosure of what he had thought were private remarks, backtracked quickly. He had no authority to “send students home” (though he didn’t deny he had said so) and as for spies, it was “an insult to both the students and the administration to charge them with such underhanded methods”—another “non-denial denial.””We are not after the scalp of everyone around here,” Bursley told the Daily. “We merely want the men to conduct themselves as self-respecting citizens of a law-abiding community… Such write-ups as the Times has given us would lead an outsider to believe that this is the most immoral place in the country.”The story of the Phi Delta Phi “chorus girl” party now broke in full—not just in the Times but in all the Detroit and Ann Arbor papers—though it turned out there was less evidence of sin than the Times had implied. The chorus girls’ manager and his wife had acted as chaperones at the party (for whatever that was worth), and Dean Bates had “failed to find that any immorality existed” or even “that any considerable amount of liquor had been consumed.” Still, there was a tip-of-the-iceberg implication to the reports that set tongues wagging. “There is more than one student praying that nothing may get into the papers where his girl back home will get wind of it,” the Detroit Free Press chortled.The editors of the Daily, who in that era exhibited a boosterism rare in the publication’s history, defended the administration and the students alike, taking aim instead at the bringer of bad news.”‘Take a Crack at the University’ seems to be the new creed of yellow journalism in Michigan,” the editors wrote. “The raking up and sensationalizing of incidents which in fact concern only a very negligible percentage of the student body—President Marion L. Burton placed it below five per cent”—can “serve no purpose but to harm the good name of the University throughout the entire nation.”President Burton hastened to assure the campus there would be no “stringent blue [anti-vice] laws” or “petty regulations” put in place. The administration would steer between “the fanatic who advocates relentless blue laws and wants ‘to take the sun out of Sunday,'” and, at the other extreme, a culture of extreme license.It was a middle ground that college presidents have sought to hold ever since.”We have no fanatical attitude toward student offenses,” Burton declared. “Many minor things we do not see, because we would rather not. I have implicit faith in youth and would not have the dean of students regarded as a policeman or a spy. “The university cannot be aloof in these matters. The state holds us responsible for what goes on here… There are a few students who still think they are independent of the community. For those who persist in this attitude, there is no room in the University of Michigan.”