The man who gave me Japan 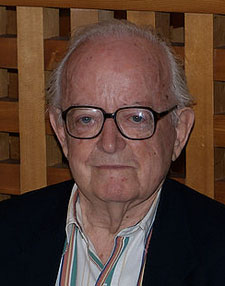 Edward Seidensticker was called the greatest translator of his era. (Photo: Urashimataro.)

He was a short, nervous, tightly wound man. He always wore a coat and tie, most usually a bow tie, which made him seem like the bad accountant among the gang of bank robbers. He face was usually glistening with perspiration. His speech was somewhat pained, as if someone were forcing him to say words he never would have said otherwise. He was Edward G. Seidensticker (that “G” followed him wherever he went), and he was a professor of Japanese Literature at the University of Michigan where I was a student forty years ago. He was my Columbus for six months charting the New World of Japan and its prose and poetry.

Edward Seidensticker was diminutive in stature, but he was a giant—although I didn’t know it at a time. When he walked into the classroom for the first time—I think there were just seven or eight of us—I thought, seeing how unlikely, how un-towering he looked, that I had made a grave error. I was thrown, too, by his choked, somewhat agonized way of speaking, but soon I got over that. I got over that as soon as I started listening. What knowledge. What authority. I knew nothing—and I mean nothing—about Japanese literature. I didn’t even know there was any such thing. I certainly didn’t know that Edward Seidensticker was one of the great translators of Japanese literature. (His major opus, the translation of “The Tale of Genji”—the great majority of which was done when he was at Michigan—was still to come, ten years later.) I didn’t know that he was a friend of Yukio Mishima and Yasunari Kawabata, Japan’s first Nobel Prize winner. And that, by all standards, he was one of the great scholars of Japanese literature in the world.

In his class, we studied Japanese poetry and prose from the earliest days until the present. So, we read Arthur Waley’s translation of the eleventh century masterpiece, “The Tale of Genji,” by Lady Murasaki Shikibu that Professor Seidensticker would later translate. We also read excerpts from Sei Shonagon’s tenth century “Pillow Book.” Professor Seidensticker talked about these books as if he had personally known their authors, and, who knows, maybe he had. He could tell us everything about them, and did. But for me, who, somewhere, knew he wanted to be a writer, who wanted to throw his lot in with that calling, it was the Japanese poetry that Edward Seidensticker taught and discussed that grabbed me—then and still—by the heart. 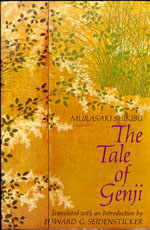 Now here was this somewhat agitated, perspiring, highly intense little man telling us about a compilation of Japanese poetry called the Man’yoshu—”The Book of Ten Thousand Leaves,” as he translated. This was a book—Japan’s greatest book of poetry—compiled sometime in the middle of the eighth century in which there were poems from the fourth century to the eighth. Was Professor Seidensticker sure? It seemed he was. In his half agitated, half shy way, Edward Seidensticker revealed the great voices of the Japanese poetic past. I can still remember the names forty years later that he spoke: Akahito, Yakamuchi, Okura and Otomaro. But the poet who I am forever grateful to him for introducing me to is Kakinomoto no Hitomaro. When Professor Seidensticker spoke of him, he got a faraway look, as if he were transporting himself back to the end of the seventh century when Hitomaro lived. “Hitomaro was one of Japan’s six poetic saints,” Professor Seidensticker said, “and many think—as I personally do—that he was the greatest of all. We don’t know anything about him—except that he was married and had a child. It appears that he was married twice. There are poems by the wife of Hitomaro written after his death. But it was about his first wife that he wrote so movingly and…memorably.”

He had the Man’yoshu in Japanese as well as in English, and sometimes he would read us the Japanese first and then the translation. He did this with Hitomaro, and I wish I had the transliteration of the poem, because I would print it here for you to read, even in this foreign tongue, the better to feel that moment when Professor Seidensticker read the Japanese words and, finishing, simply said,”Wonderful.”The poem he read from was “After the Death of His Wife.” He read the passage next in English:

In the days when my wife lived,
We went out to the embankment near by—
We two, hand in hand—
To view the elm-trees standing there
With their outspreading branches
Thick with spring leaves. Abundant as their greenery
Was my love. On her leaned my soul.
But who evades mortality?—
One morning she was gone, flown like an early bird.

“Now,” he said, “if that doesn’t move you, there’s little I can do for you.”Even then, as a punky college junior, I knew he was right. What Kakinomoto Hitomaro—and his vessel, Professor Edward Seidensticker—taught me was that this man with his “sleeves…wetted through with tears,” as he writes in his grief, could reach across 1300 years and touch me lastingly. If, I thought, I couldn’t write nearly as well as Hitomaro, maybe I could stand in his shadow, and that would be enough.

About the Author
Richard Goodman is a 1967 graduate of U-M's College of Literature, Science, and the Arts. He is the author of "French Dirt: The Story of a Garden in the South of France" and "The Soul of Creative Writing." He won a Hopwood Award for fiction in 1966. His essay, "Homage to Cazzie Russell" appears in "Writing Ann Arbor: A Literary Anthology" (UM Press).
Social
Share on: Share on Twitter Share on Facebook