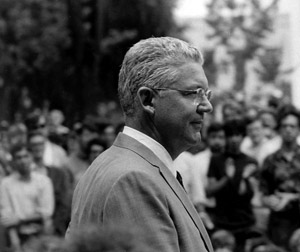 Robben Wright Fleming, the imperturbable president of the University of Michigan who steered the school safely through the student unrest of the late 1960s and early 1970s, died Jan. 11 at The Care and Rehabilitation Center at Glacier Hills in Ann Arbor. He was 93.Fleming served twice as U-M’s leader—from 1968 to 1978; then as interim president in 1988, between the administrations of Harold Shapiro and James J. Duderstadt. His devotion to the ideals of academic freedom and civil debate amid social and political tumult led the regents to name the university’s central administration building in honor of Fleming and his wife, Sally, who died in 2005.
Do you remember Robben Fleming? Read and share stories about him, and his era, in “Your U-M History.”
“Robben Fleming will be remembered in the same breath as Henry Tappan and James Angell as one of the truly great presidents of the University of Michigan,” President Mary Sue Coleman said. “In an era of friction and fighting, he provided a voice of reason and respect. He served the University of Michigan with distinguished leadership, skill and integrity, and a grace that endeared him to a generation of students and faculty.” 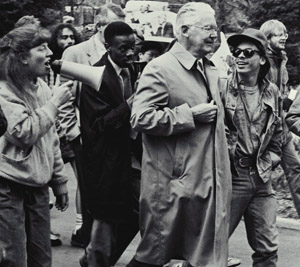 President Fleming and demonstrators during his second term as U-M President, 4/15/88

Correction: Fleming was president of the Corporation for Public Broadcasting, not chairman. This article has been updated to correct the error.