Back to his roots 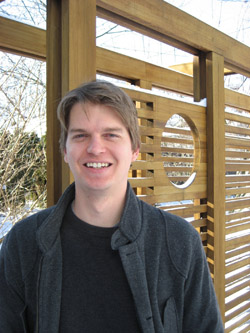 Karl Rosaen moved to Silicon Valley after graduating from U-M in 2004, returned to Michigan to launch a new company, RealTimeFarms.com, that helps consumers find fresh, local produce and farm goods.

U-M alumnus Karl Rosaen helped develop Google Android, recently named as Time Magazine’s “Gadget of the Year… the first credible challenge to Apple’s iPhone.”Speaking at U-M’s FuturTech conference December 4, Rosaen was asked to make a bold prediction and said Google’s versatile Android platform will wind up with more users than the more famous iPhone.After thriving in Silicon Valley, Rosaen decided to start a new startup. Where did the talented 29-year-old software engineer decide to launch his new web-based company? Ann Arbor, Michigan, of course. He even left California for Michigan in late fall, just as another Michigan winter was approaching.

While some worry about a “brain drain” of talented college graduates leaving the state for their first jobs, as Rosaen did five years ago, few note that many, like Rosaen, eventually move back as soon as the opportunity arises—often within five years.A July 2006 U-M study found that 77 percent of U-M in-state graduates who had graduated between 2001 and 2005 were still living in the state while 10 percent of the out-of-state and 15 percent of the international students had settled here.

Rosaen, who earned his bachelors in computer engineering in 2003 and his master’s in computer science and engineering in 2004, recently moved back to Ann Arbor to start a new business, RealTimeFarms.com, which plans to help consumers by making it easy to find fresh, locally grown food close to them via online or mobile access to crowd sourcing reports on what is available at farmers markets.

Such systems and dining options are already plentiful in Silicon Valley but more rare in other parts of the country, which makes Michigan a more appealing place to start such a business, he said.Michigan is also more like the rest of America than Northern California is, making the state a better place to test a national business model, he added.

“Ann Arbor is a cool place to be, a great place to live,” Rosaen said. “I was pleasantly surprised to find a pretty solid community of geeks and entrepreneurs in Ann Arbor, from events like the new tech meetup to shared work spaces like the tech brewery.”

But the biggest draw for Rosean and many Michigan natives is family. Rosaen and his wife are both natives and have family here. If their parents lived in California things might be different, he said, but this is home where their relatives and many friends live, adding to the appeal.Google was co-founded a decade ago by U-M alumnus Larry Page, who, in turn, brought a growing Google division to Ann Arbor. While at Google, Rosaen spent two two years on the Android team, helping to launch the initial 1.0 vproduct, and the subsequent “cupcake,” “donut,” and “eclair” (Android 2.0) releases.

He hopes RealTimeFarms.com will empower local farmers and raise awareness of the availability of fresh local produce, which has grown in popularity due to interest in healthy local produce in locally-produced Michigan products.