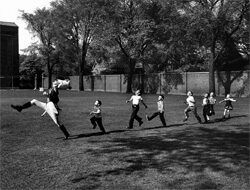 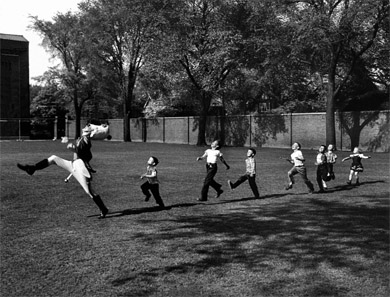 On October 30, 1950, Life magazine carried what is arguably the most widely seen and possibly the best photograph ever made at the University of Michigan. It shows an exuberant drum major—head thrust back, right leg thrust forward at an impossible angle—marching from right to left across a close-cut field. Seven children bounce along behind him in ragged single-file, their own heads thrown back in imitation. In the background, four stately trees seem to march in a procession of their own.

The photo was taken by Alfred Eisenstaedt (1898-1995), the great Time-Life photographer who specialized in capturing spontaneous images that told an entire story, the best-known example being a sailor’s passionate embrace of a nurse in Times Square on V-J Day in 1945.

In the fall of 1950 Eisenstaedt was in Ann Arbor on assignment from Life, then monumentally popular, to shoot a feature package on the Michigan Marching Band. The assignment testified to the extraordinary prestige of the band and especially of its director, William D. Revelli, director of U-M bands from 1935 to 1971.

Revelli made the Marching Band the nation’s best by a combination of personal dedication (at the start of his career, at his own expense and on his own time, he devoted ten years of training and practice to mastering the principal band instruments); the highest standards (“Revelli was not fussy,” a drummer of the 1930s recalled much later, “we just had to be perfect”); and charisma.

William Revelli built U-M’s band into the nation’s best. Do you remember him? Share your story in our comments section.

Other band directors said their students played better for Revelli, as a guest conductor, than for themselves. U-M leaders deferred to him. Don Canham, a legendary figure in his own right as athletic director from 1968 to 1988, once said: “I wouldn’t have dared tell Revelli what to do.” The commander-conductor of the U.S. Air Force Band declared that “football has its Vince Lombardi, Symphony Orchestra has its Toscanini, the film industry its John Wayne. The bigger than life figure in the history of the American Band movement is clearly Dr. William D. Revelli.”

In the Marching Band (only one of several U-M bands under his supervision), Revelli forged an instrument with a rare power to inspire and thrill. Its surging, wheeling ranks somehow combined flawless precision with a kind of wild exuberance. That was the ineffable quality that Eisenstaedt saw materializing before his eyes that afternoon in 1950—even though not a single musician appears in the picture.

As he recalled it later, Eisenstaedt already that week had shot many pictures of “the usual things: the formations, the rehearsing, and so on.” He was wandering on the athletic campus when he caught sight of the drum major—it was Dick Smith—rehearsing all alone. Kids were playing nearby, and “they saw him, too,” Eisenstaedt said, “and all of a sudden they ran out and began to mimic him. It happened so quickly that I barely had time to focus.”

At least two superb photographs of the drum major and the children resulted. Both have been reprinted, but only the one that appeared in Life became famous. Revelli never forgot the coverage. “I think that for our marching band,” he told an interviewer more than 30 years later, “that article was the greatest thing that ever happened.”

The photography critic David Friend, a veteran editor at Life and Vanity Fair, has noted that while Eisenstaedt took well-known pictures of celebrities from Winston Churchill to Jacqueline Kennedy, his best works, like those of Frank Capra on film and Norman Rockwell in portraiture, were “the ones that distilled everyday life to its essential joie de vivre.” They captured “the ebullient moment.” The image of the strutting drum major and the kids, Friend said, was Eisenstaedt’s “ode to joy.”

In a memoir, Eisenstaedt wrote: “People sometimes ask me, ‘When you go off on an assignment, what do you have in mind?’ The truth is, unless the briefing from the editors is very specific, I don’t usually know. I may have nothing consciously in mind. I have to see things first. You never know what you’ll discover.”