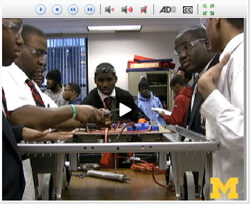 More than 100 high school students from across the city are building robots in the University of Michigan Detroit Center.At the Michigan Engineering Zone, or the MEZ, the students find space, a metal shop and engineering mentors to help them as they compete in the FIRST Robotics 2010 national competition.

An example of U-M’s increased community involvement; the MEZ is sponsored by the U-M College of Engineering in collaboration with Detroit Public Schools.

FIRST stands for “For Inspiration and Recognition of Science and Technology,” which sums up the program’s mission. Through the MEZ, the college is advancing these goals that it shares.”We are committed to developing a pool of talent and educational opportunities for high school students,” said Jeanne Murabito, College of Engineering executive director for student affairs. “Through this collaborative effort, we are delivering an exciting mentor-based program that builds engineering, science and technology skills; inspires creativity; and fosters self-confidence and team work.”

Murabito calls the atmosphere “magical.” Fourteen teams have used the space for this year’s competition. They learn from mentors from the college, the U-M and MIT alumni associations, Ford and SAE International.

For some teams, the MEZ is what makes it possible for them to participate.

“We would not have had a team if not for this facility,” said Mary Evans, retired social studies teacher and coach of the Kettering High School team. “From day one, we had a place to build and a multitude of mentors.”

Last year, Evans’ team had to travel 20 miles each way to build with another team that offered to help them. Now, students take a school bus to their workspace.

“Through efforts like this one, Michigan Engineering is working to create a larger, more broadly educated, diverse pool of capable engineers, said David Munson, the Robert J. Vlasic Dean of Engineering. “It is important that all high-school students have experience in creating something new, and not just in studying what already exists.”

The 5,200-square-foot facility includes a practice playing field where students can test their machines. FIRST’s game for 2010 is essentially three-on-three soccer. The initial rounds of competition began March 4, with the finals in Atlanta starting April 15.