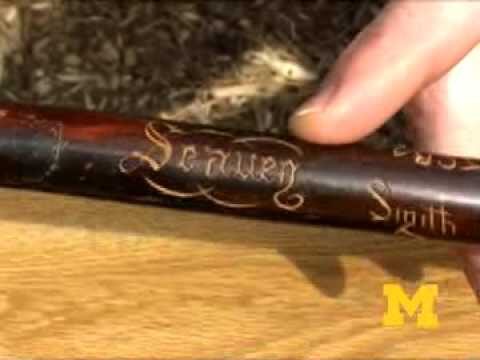 In years past, a search of the attic of many a Michigan alumnus would have uncovered a fine, polished, walking stick. It was made of durable hardwood, with names and initials inscribed by hand and layered over with coats of varnish, still glossy after the passage of decades. This was a senior cane, carved in youth and saved as a more or less indestructible memento of friends and fellow students from long-ago days in Ann Arbor.

The Engineering class of 1915 posed proudly with their canes. A handwritten note in lower left of the photo reads, “A few are ‘able’ to support a ‘cane.'” (Click image for larger version. Photo courtesy U-M Bentley Historical Library.)

Eight or ten such canes are kept in storage at the Bentley Historical Library on North Campus. Each was given to the library by some descendant who sensed that a great-grandfather’s (in fewer cases, a great-grandmother’s) Michigan cane ought to be saved for someone else to see, though the young men and women who carved their names had been forgotten.

One tradition has it that senior canes first appeared at Michigan in 1889, when the 50-year-old picket fence that bordered the Diag was finally taken down. The fence had been built in the 1830s to keep neighboring livestock off the campus. So the fence’s demise—or so campus storytellers said many years later—had been a symbol to students of the university’s maturity. No longer could snobbish easterners scoff at Michigan as a “cow college,” and seniors were said to have made canes from the cedar pickets to prove the point. Another legend says students brandished the discarded pickets in a melee with Ann Arbor police, so the canes represented a victory of “gown” over “town.”

The origins of the senior cane are unknown, but they became a nearly ubiquitous accessory for university men until the mid-20th century. Above: the University of Michigan Press club circa 1877 proudly poses with its senior canes. Below: The editors of the student-run magazine “Palladium” in 1879. (Click images for larger versions. Photos courtesy of U-M Bentley Historical Library.)

But, in fact, senior canes were all over the campus long before 1889. “The cane fever is upon us,” wrote a student journalist of 1876. “The movement originated with the senior class, who, with the laudable desire of carrying away some token of their college days to show to their admiring friends and descendants, produced a fine lot of good sized hickory canes, upon which they are proceeding to cut their names to the best of their ability… Wherever the senior is found, there is his cane, and knife also…in the library and hall; even in the recitation rooms, where the professors have at last yielded in despair to its potent sway.”

Another story says that senior canes memorialized a heroic moment in the 1850s, when club-wielding students defended the great abolitionist Wendell Phillips against rowdies who were trying to keep Phillips from speaking at an Ann Arbor church. But even if this is so, it can’t be the only reason that canes became de rigeur at U-M, since canes were traditional at other schools, too. The most notable example is Princeton, where students still take part in an annual Cane Spree, in which a designated underclassman tries to wrestle a cane from a designated upperclassman.

That rite captures the cane’s symbolism. Since ancient Egypt and Greece, the cane or staff or walking-stick has represented the power of maturity and wisdom—the bishop’s scepter, the wizard’s wand, the field marshal’s baton. By the 1800s, the walking stick had become fashionable among the genteel as a sign of social superiority, or at least of a wish to attain it. The senior student who carved a walking stick was—no doubt unconsciously—enacting the ritual of coming of age.

In the era when Michigan enrolled far fewer students than now, it was possible to fit the names of every member of one’s college class—even in LSA—on a single cane. The owner of one such cane now at the Bentley Library was a member of the LSA class of 1871, which included only 51 graduates. So the names on his cane would have brought back the faces of nearly all the young men—and only men, since coeducation had begun only the year before—with whom he had gone through four years at Michigan. To name just three, they included Gideon Webster Seavey, who came to Ann Arbor after serving in the 14th Illinois Infantry, which had fought at Shiloh and Vicksburg; Theodore Alpheus Felch, son of the fifth governor of Michigan, who went west to practice medicine in Deadwood, Dakota Territory; and Harry Burns Hutchins, who became dean of the Law School and the sixth president of the University.

In the 1920s, seniors strutted around campus on “Cane Sunday” every April, and annual class competitions included cane sprees. As late as 1935, a leading senior told a Detroit reporter that “a senior cane is a mark of distinction, a privilege, and the foundation of a ripe old memory.” But in the great expansion of U-M after World War II, the senior cane—like other traditions from the era when college was mostly an upper-crust preserve—faded away.

Sources include articles from the “Chronicle,” a U-M student newspaper of the late 1800s, and the Michigan Alumnus; the papers of Elizabeth Gaspar Brown at the Bentley Historical Library; and the “Walking Canes and Sticks” blog (walkingcanes-sticks.blogspot.com).