The flap over ‘Flaming Creatures’

To Ann Arbor police detective Eugene L. Staudenmaier it was just another routine obscenity bust. After 15 minutes of watching grotesque images of naked, writhing flesh flicker across the movie screen, he had seen enough. Making his way through the crowded hall, he marched up to the projection booth, ordered the film stopped, and took possession of the print.

But as he went to leave, the offending reel concealed beneath his coat, Staudenmaier realized that this particular seizure would be anything but routine. It was the ’60s—a time of demonstrations and protests against the war, the government, and authority of all kinds. The youthful spectators gathered in the auditorium of the University of Michigan’s Architecture and Design building weren’t going to sit idle as the Man walked off with their Wednesday evening’s entertainment. The Michigan Daily reported that “the incensed audience blocked Staudenmaier’s exit from the projection booth for a short time,” and that after the way was cleared the anxious detective “rushed down the staircase to a chorus of boos and insults.” 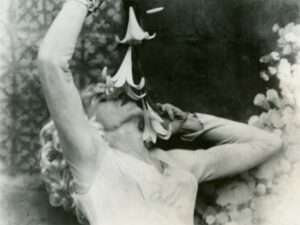 An image from ‘Flaming Creatures.’ The experimental movie included nudity, transvestism and simulated sex. When police confiscated the film, students launched protests. ‘We didn’t like the idea of the police busting movies,’ recalls one student leader. ‘We were also looking for trouble, as usual.’

A group of moviegoers followed Staudenmaier outside and as he drove off a few kicks were directed at the squad car. More than a hundred then trooped a mile through the cold Michigan winter to City Hall, where they staged a four-hour sit-in in the main floor lobby.

And this was only the beginning. The confiscation of the underground film “Flaming Creatures” by the AAPD on January 18, 1967, triggered a whirlwind of controversy that preoccupied the campus and the Ann Arbor community for months afterward. Four members of the university’s Cinema Guild were arrested for showing the film and faced sentences of up to 12 months in prison. The case would drag on through the courts for more than a year and carry national repercussions that extended far beyond that.In the 1960s there were several student groups that screened art-house films on the U-M campus. Foremost of these was the Cinema Guild, which every Thursday through Sunday showed two or more movies a night at 50 cents a ticket. The selection ranged from French New Wave and Italian neo-realism to the great silent comedies of the ’20s and the golden-age Hollywood classics of John Ford and Howard Hawks.

“It was a film education in itself,” says Hubert Cohen, then an English instructor and faculty adviser to the group. “Cinema Guild was highly respected on campus, and well known.” At that time the organization also helped sponsor the small but prestigious Ann Arbor Film Festival.Junior Mary Barkey was co-chair of the Cinema Guild for the 1966-67 season. She recalls that many in the group were eager to show new American underground films—especially ones that had been banned. “We knew it would be something to do, to show a movie that people considered pornographic.”

“Flaming Creatures” was a forty-minute short that had been in trouble ever since its first public screening in 1963. Conceived and directed by performance artist Jack Smith and championed by Village Voice film critic Jonas Mekas, the strange, plotless film was almost impossible to categorize—as parody, pastiche, or transsexual fantasy. The filmmaker himself thought of it as a comedy. As far as the censors were concerned, however, it was obscene. Mekas had been convicted on pornography charges for showing the film in New York. His case had been appealed and was awaiting consideration by the U.S. Supreme Court. 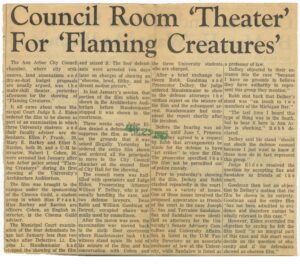 Hugh Cohen concurs. “I didn’t think it was obscene then, and I think it would be boring to most people now.”Not everyone agreed. An anonymous faculty member tipped off the authorities to the movie’s unsavory reputation. “I got a call from the police chief,” recalls Cohen, “saying that they were sending somebody to see if this was pornographic, and to seize and arrest.” Cohen was undaunted. “I said that we felt we had the right to show it.”

“Today’s university students are tomorrow’s leaders,” he later explained to the Michigan Daily. “I want to do what’s necessary to protect them from pornography. Otherwise they’ll come out of school with no backbone.” (In that same interview, Staudenmaier also expounded on the lack of virility he had been noticing of late among male university students. “I’d like to get some of the men and women on campus in a fight,” he said, “because I think the women will win.”)

The seizure of “Flaming Creatures” made the national news and quickly became the community cause célèbre. Debate raged in classrooms, coffee shops, and the editorial pages of local newspapers. Student and faculty groups issued position statements. Petitions were circulated. University officials talked of establishing a censorship board, or even dissolving the Cinema Guild, while VOICE-SDS, the radical campus political party, threatened to obtain a copy of the film and show it at Hill Auditorium. “We didn’t like the idea of the police busting movies,” remembers Gary Rothberger, then a leader of VOICE. “We were also looking for trouble, as usual.”

Concurrent with the ideological debate was a complex and slow-moving legal battle involving the four Cinema Guild members who were arrested on obscenity charges—Mary Barkey, Hugh Cohen, and two other students—and a counter-suit filed in federal court against the AAPD.The case wore on through the summer until finally on September 1 Ann Arbor Municipal Judge Samuel J. Elden declared “Flaming Creatures” to be a “smutty purveyance of filth” that “would sexually arouse and excite transvestites and homosexuals.” He ruled the film obscene and the seizure lawful. The four defendants were bound over for trial in circuit court.

Jury selection was completed on December 11 and the trial began on the 12th. It ended that same day when Mary Barkey agreed to plead guilty to a lesser charge. Many were angry with Barkey for supposedly selling out, but fellow defendant Elliot Barden supported her decision. “We were going to lose,” he says. “The liberal university community was behind us, but the world wasn’t.”On February 7, 1968, Barkey was ordered to pay a fine of $235. The charges against the others were dropped, and the suit against the Ann Arbor police was withdrawn.”So the whole thing just poofed out,” says Barden. “What was supposed to be this sensational trial turned out to be nothing, and ended with a whimper.”

But there is yet a bit more to the story. In late July Lt. Staudenmaier and Chief of Police Walter Krasny were requested to bring the confiscated print of “Flaming Creatures” to Washington, where it was to be used as ammunition in the fight to prevent liberal Abe Fortas from being confirmed as Chief Justice of the Supreme Court. Senator Strom Thurmond was putting together an impromptu “Fortas Film Festival” consisting of controversial movies Fortas didn’t consider pornographic. According to Thurmond, the showing of “Flaming Creatures,” along with a couple of short stag films, “shocked Washington’s hardened press corps”—although Harper’s magazine reported that the newsmen mostly giggled. Either way, the screenings likely contributed to the collapse of the Fortas nomination a few months later.Because of its criminalization, “Flaming Creatures” became a staple of midnight showings in underground theaters for years afterward.

Many who missed it the first time around in Ann Arbor were able to see it elsewhere. Many, like Gary Rothberger, wondered what all the fuss was about. “I thought it was really boring,” he says. “I wouldn’t have ever seen it if it hadn’t been busted.”Today the film enjoys the admiration of a growing circle of film scholars and critics, one of whom is Entertainment Weekly reviewer (and U-M alum) Owen Gleiberman. “‘Flaming Creatures’ predicted and helped unleash the revolution of the 1960s, to the extent that the movie is about a freewheeling explosion of all kinds of sexuality,” he explains. “It was a tiny eruption of psychic energy that few heard in 1963, but that would ripple outward and have its chain effect.”

“It was like a great poem,” Gleiberman says, “expressing something ahead of its time.”