Artist of the Chill and Canyon 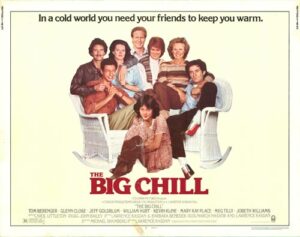 Lawrence Kasdan parlayed his Michigan experiences into a beloved film (‘The Big Chill’) and a stellar career.

Most college graduates consider the years they spent earning their degrees to be some of the most important of their lives, and Lawrence Kasdan is no exception. In Kasdan’s case it’s not just because of how his intellectual and artistic horizons were so profoundly broadened, or the many lasting friendships he made, or that he met and fell in love with his wife of nearly 40 years. It’s also that he was able to turn his experience of attending the University of Michigan in the late ’60s into “The Big Chill,” the surprise box-office hit of 1983 that earned three Academy Award nominations and established him as one of the most important filmmakers of the past three decades.Kasdan grew up in West Virginia, far from the glitz and glamour of Tinseltown. But after seeing David Lean’s classic “Lawrence of Arabia” at age 14 he vowed that one day he would direct his own films. First, though, he wanted to learn the art of dramatic writing, so after graduating Morgantown High School rather than head for California he enrolled at the University of Michigan in Ann Arbor.

“I went to Michigan so I could study with Kenneth Rowe, who taught Arthur Miller,” says Kasdan. “Also so I could enter the Hopwood contest, which I had heard about. It’s still the richest collegiate writing contest.” Kasdan won three years in a row, gratefully accepting the $2,900 in prize money. “It put me through school,” he says.

Kasdan had lost none of his directorial ambitions, however, and although at that time there was no formal film program at Michigan he was fortunate to find himself part of a campus with a tremendous enthusiasm for cinema. The highly-respected Ann Arbor Film Festival—founded in 1963 by U-M art professor George Manupelli—was at its peak of popularity and influence in the late ’60s and early ’70s when Kasdan was going to school. There were also a number of student organizations run by movie buffs that put on regular showings of foreign, art house, and underground films, as well as the Hollywood classics of the ’30s and ’40s.

“Everybody was obsessed with film then,” Kasdan explains, “and there were so many great films being made, and they were coming to Ann Arbor and being shown by groups like the Cinema Guild. For someone like me who had grown up in West Virginia, where I hadn’t had access to all these old movies and foreign movies, Ann Arbor was like heaven.”Kasdan’s movie mania was fueled not just by the amazing variety of films being shown but also the community that embraced them. “I thought this was a great thing, to find a community of people who were excited about the same things I was. They could be excited about these foreign films that most of the other kids didn’t even know about.”One of those who shared his appreciation of foreign cinema was a 19-year-old Detroiter and fellow U-M junior named Meg Goldman, who went with Kasdan on a blind date to a showing of a Japanese film called “Woman in the Dunes.” Two years later they were married.Kasdan graduated in 1970 with an English degree and went west in hopes of enrolling as a graduate student at the UCLA film school. He was accepted to the writing program but not to the directing program. In frustration he returned to Michigan and took a Master’s Degree in Education with the idea of making a living as a high-school English teacher while writing screenplays in his spare time.But teaching jobs were scarce in the early ’70s and Kasdan ended up working as a copywriter for advertising giant W. B. Doner (now simply Doner) in Southfield. He quickly distinguished himself, winning a CLIO Award for his first television commercial. It was an ad for (ironically) West Virginia brand bacon, a 60-second comedy built around the question of what to call a new state. The answer: Bacon.

Despite his success Kasdan loathed the advertising business and more than ever yearned to apply his creative talents to the making of movies. Finally in 1975 he was able to find an agent with a screenplay called “The Bodyguard.” Kasdan packed up the family and moved to Los Angeles—although he made sure to line up another advertising job as a safety net.”The Bodyguard” was famously turned down 67 times before being optioned by Warner Bros. in 1977 for $20,000. (It wouldn’t reach the screen until 1992.) From there Kasdan’s rise was meteoric. Suddenly he was the hottest screenwriter in the business, penning “The Empire Strikes Back” and “Raiders of the Lost Ark” and hobnobbing with George Lucas and Steven Spielberg. In 1981 he directed his own script for “Body Heat,” fulfilling a dream that had weathered almost two decades of struggle and rejection. The string of hits that followed included “The Big Chill,” “Silverado,” and “The Accidental Tourist.” Today he has made nearly a dozen movies and picked up four Oscar nominations along the way. In spite of the fame and fortune the Michigander in Kasdan has never been fully at ease in Hollywood. He has long criticized the blockbuster mentality that pervades so much of the movie industry today. He fears that the smaller, story-oriented picture that made the ’70s into a golden age of American film is now threatened with extinction.”Everything has become so expensive,” Kasdan explains. “Selling a movie is now more expensive than making it. Advertising and distributing, it becomes an enormous debt, even if you have a relatively low-budget movie. Everything is now a big bet, and they just don’t believe that kids will come out for good stories. They believe that they want only spectacle. It’s not true, and every year there are exceptions. But it’s a self-fulfilling prophecy because that’s all Hollywood is making now.”

Over the years Kasdan and his wife Meg have maintained their Michigan connections as a way of staying in touch with reality. The circle of friends they made in college continue to serve as an extended support group. Kasdan also gives back to the community that helped start his career with a generous writing scholarship given out as part of the U-M Hopwood contest, as well as a $1,000 prize awarded each year at the Ann Arbor Film Festival. Like many others on the coast, Kasdan has taken a keen interest in the Michigan film incentive program. He thinks that the incentives have been good for the state but isn’t surprised to hear that they are in jeopardy. “I think it’s been fantastic for Michigan, because it’s worked so well. It’s worked as well as any incentives in the country. But there are two reasons why they would revoke it.””One is that, politically, it’s unpopular in hard times to support movies. That’s how it is in California. We have almost no incentives here because the legislators don’t want it on their record that they gave money to support the film industry when everybody else is struggling. That’s one reason.””The other is if they’re not making any money on it. Now, I have no idea what the numbers are for Michigan. They’ve had enormous success getting people to shoot there, but they may be evaluating and see that they haven’t made any money on it.””But I would guess it’s more likely the other thing—the politics.”If the incentives aren’t withdrawn, there’s a good possibility that some time soon Kasdan will be back in the Great Lake State, making a film. “I’ve been looking for something to do in Michigan,” he says.When he finds it, we’ll be here.