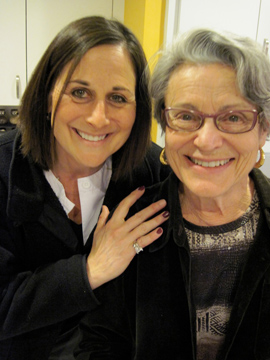 Every other Friday, Sandra Garber (age 76, class of 1955) drove two miles from West Bloomfield to daughter-in-law Lisa Garber’s (age 49, class of 1984) house in Farmington Hills, Michigan, by 7:00 a.m. to get breakfast for her grandchildren and send them off to school. Lisa, a nurse, worked the early shift. A professional caregiver for the morning stint would have been expensive and difficult to find. “I don’t know what I would have done without her,” says Lisa. Sandra Garber is available on a moment’s notice if the kids get sick or need to be driven to one of their activities. For three years, she even took piano lessons with her then middle-school-aged granddaughter, Samantha. While Lisa sees her mother-in-law as an invaluable helpmate, Sandra says it’s a joy being so involved in her grandchildren’s lives. “It’s the most important thing in the world. What else is there?”

Women are finding that extended family can provide an essential source of support, especially during difficult financial times. Now more than ever, they’re not only leaning on their mothers, but are also finding a great ally in the figure often depicted as overbearing, critical and judgmental: the mother-in-law. It wasn’t always that way. There has been a traditional move away from any involvement by grandparents, says Dr. Jack Novick, an adjunct clinical associate professor of psychiatry at the University of Michigan who also has a private practice. In much of American culture, there’s a perception that leaving your parents is a healthy progression of development, he says. But that creates a situation where parents become isolated from their extended families “and have to buffer all of life’s stresses on their own. It’s very hard. It’s not the way we’re built from an evolutionary point of view,” says Jerry Miller, a psychologist and director of U-M’s Center for the Child and the Family. The more enduring relationships a family has, the more support they can count on during tough times. And the recession is starting to make families realize the importance of broadening the sphere of the nuclear family. Even those very committed to independence suddenly find that they need to reach out for emotional, if not financial, support. A March 2009 survey by the American Association for Retired People found that 34% of those who expected to move in with extended family said it was due to loss of income. The recession has prompted a surge of grandparent caregiving. A reader poll conducted by the web site Grandparents.com last year found that out of 4,814 respondents, 52% of grandparents are either living with their grandchildren or providing child care on a regular basis.While these situations are often motivated by hardship, experts unanimously endorse the importance of moving more towards the extended-family approach to childrearing. The economic downturn is “creating a trend for multi-generational living,” says Amy Goyer, senior vice president for outreach at Grandparents.com. And that can have a silver lining. Toni Antonucci, Professor of Psychology and Senior Research Scientist at U-M’s Institute for Social Research Life Course Development Program, says in a world of working women, “family members are the back-up and I think they’re a back-up in a positive sense.” This even is evident in the White House, where Michelle Obama invited her mother to move in with the family. Antonucci says that was obviously not a financial decision, but a matter of preference that will give grandparents “a greater justification and recognition of the care they’re giving.”In terms of child care, hired help can’t compare to grandparents. What children need the most in their first few years of life is to be cared for “by someone who has an irrational attachment to them and is crazy about them,” says Dr. Howard Weinblatt, a clinical assistant professor at The University of Michigan Medical School and medical director of Child Health Associates in Ann Arbor. That’s difficult to acquire from someone who is not a family member.Grandparents will likely have an enduring presence in the child’s life, while sitters come and go. Grandparents can set limits and expectations that often don’t come from teenagers, who are more interested in trying to be friends with the child. Grandparents don’t watch the clock and it’s not an economic arrangement. This can be an opportunity for grandparents “to develop quality relationships with their grandchildren and vice versa,” says Miller. 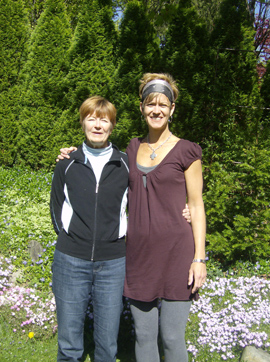 Lisa Kelly and her mother-in-law Sharon.

Michael Axelman, a psychologist in Santa Clara, California, says this generation of children doesn’t spend enough time with older people and the result is a loss of a cultural transmission of knowledge, where children are entirely self-centered and have no sense of their past. If they hang out with Grandma instead of playing video games with a teenage babysitter, they can acquire greater wisdom and life experience, he says.”You feel they’ve got that connection with another generation that you, as a parent, can’t provide,” said Lisa Kelly, age 41, who works part-time as a teacher and lives in West Bloomfield, Michigan. Her mother-in-law has provided regular child care for her three boys, ages 12, 10 and four. “The way the economy is now, it was a struggle to think about paying for day care,” she says. Having her mother-in-law, Sharon Kelly, age 70, provide that service for free “has helped us tremendously,” from both a financial and emotional standpoint, sparing her son from separation anxiety. Harriet Stern, 75, became an even more involved mother-in-law when her son divorced her daughter-in-law, Deb Odom Stern, 48, three years ago. She often stays with Deb on her quarterly visits from Memphis, Tennessee to Ann Arbor and says the two have grown closer since the divorce. She frequently provides child care on a moment’s notice for her nine-year-old twin grandsons, biking with the boys to Dairy Queen and dressing in costume for Halloween. “I could call and she would be on a plane immediately,” Deb says. She even agreed to babysit recently so Deb could vacation with her new boyfriend. “I like to be part of their lives. I feel very blessed,” Harriet says. There’s a house next to Deb for sale and she is urging Harriett to buy it. “I love my mother-in-law,” she says.Miller says extended families are providing a key source of stability as recent economic difficulties create a frightening landscape for children. “You’re surrounded by a number of adults who really truly love you. And that goes a very long way.”

What about you? Do you get along better with your in-laws than the clichés say you should? Have your relationships with extended family changed due to the poor economy? Tell your story in the comments section below.