The Frieze Memorial Organ in its first Ann Arbor home, the auditorum of University Hall, under the same words from the Northwest Ordinance of 1787 that would later be inscribed on Angell Hall. (Photo courtesy U-M Bentley Historical Library.) Click image for larger version.

From April to October 1893, the World’s Columbian Exposition—called the “White City” for its alabaster architecture and its nightly illumination by millions of electric lights—drew the rapt attention of much of the world. Some 27 million people traveled to Chicago’s Jackson Park to see it. Of these, several hundred thousand entered the 10,000-seat Festival Hall to hear what was widely regarded as one of the greatest musical instruments—and certainly one of the largest—ever constructed. It was a 3,901-pipe organ, 34 feet wide by 25 feet deep, 38 feet tall at its highest point, manufactured by the Farrand & Votey Company of Detroit to specifications drawn by the eminent organist Clarence Eddy of Chicago, incorporating features invented by Frank Roosevelt of New York City, first cousin to Theodore Roosevelt. It was one of the first great organs to rely on electrical connections from its keys to its pipes, which ranged from the size of soda straws to the size of tree trunks. Together they could replicate the sounds of a vast symphony orchestra.

See a souvenir program from U-M’s inaugural organ concert in 1894.
Over the six months of the fair, “the most eminent of contemporary organists” entertained crowds at 62 recitals in all. On the fair’s last day, Clarence Eddy himself wrote of the organ that “musically, it is worthy of rank among the few great organs of the world, while from a technical standpoint it occupies a supreme position.”Later the following winter, long after the last fair-goers had gone home, workmen entered Festival Hall, took the organ apart, packed the pieces in crates, and loaded the crates on rail cars bound for Cincinnati. After a few months in storage, the parts were packed up again and shipped to Ann Arbor. 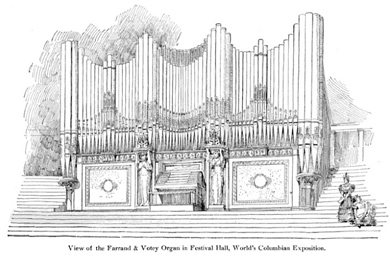 Built in Detroit, the organ was acclaimed as the finest pipe organ in the world at the Chicago World’s Columbian Exhibition in 1893. This drawing shows it in its setting at the Exposition.

In the era before radio and high-quality phonographs, when symphony orchestras were relatively rare, Americans of the late 19th and early 20th centuries listened to great pipe organs with a mixture of technological awe, local pride, and aesthetic rapture. Cities competed to buy the biggest and best. The steel baron Andrew Carnegie, famous as the benefactor of city libraries, also gave millions for municipal organs. Community fund drives were organized to buy instruments made by the most prestigious manufacturers and played by the most famous musicians. When the preeminent organmaker Ernest Skinner installed a new instrument in Cleveland in 1922—”The Finest Musical Instrument ever built by man,” ads said—a crowd of some 20,000 swept past police to squeeze into an arena built to hold only 13,000. (The show went on as planned.) The richest Americans had genuine pipe organs installed in their homes, and a new industry grew up to provide humbler home organs for the middle class.For many years before the Columbian Exposition of 1893, Henry Simmons Frieze, professor of Latin and three times the University’s interim president, had argued for the installation of a first-class organ on the campus. Frieze was the progenitor of Michigan’s musical tradition. A fine amateur organist, pianist and conductor, he launched student bands and choral clubs and introduced organ music to the daily chapel services. He persuaded the Regents to appoint the first professor of music. He was the principal founder of the University Musical Society (UMS), which was to make Ann Arbor a national center of fine music. 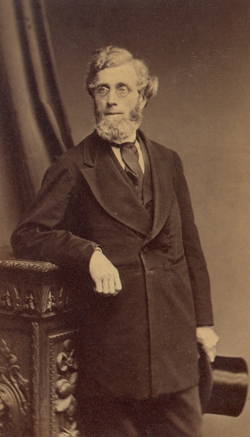 U-M interim president Henry Simmons Frieze dreamed of bringing a grand organ to campus, but he did not live to see it finally arrive. (Photo courtesy U-M Bentley Historical Library.)

Frieze believed the shared experience of music was essential to a liberal education and to community life, and students agreed. In 1874, student journalists proposed a scheme by which a fine organ could pay for itself in six months through the sale of ten-cent tickets to all those who couldn’t afford a piano in their homes. “Music,” they wrote, “good refining music, at a low price, is what the thousand homeless students and the poor people of this city are craving, and they will gratefully acknowledge as a benefactor whoever will furnish it to them.”No benefactor stepped forward, and Frieze died in 1889, but his campaign for an organ soon was taken up by the University Musical Society. It was led by Professor A.A. Stanley, first dean of the new School of Music (and co-composer of the beloved U-M anthem Laudes Atque Carmina), and Francis W. Kelsey, professor of Latin (and namesake of the Kelsey Museum of Archaeology). Both were indefatigable organizers. First they raised money from townspeople to construct a new building for UMS. Then the two professors set their sights on Chicago, where, in the wake of the Columbian Exposition, the great Farrand & Votey organ was for sale.The country was in the midst of a financial depression. Farrand & Votey had rented the organ to the Exposition for $10,000. Now they were asking a purchase price of $15,000—nearly $400,000 in 2010 currency. The University was in no position to pay such a sum for a musical instrument, however grand. So Professors Kelsey and Stanley designed a public appeal. Major donations came from U-M alumni and music enthusiasts in Ann Arbor, Detroit, Grand Rapids, Chicago, and New York. More was raised through the sale of tickets to a grand inaugural concert—$5 to cover the cost of the concert plus train fare from anywhere in the state. It was enough. For five months, workmen reassembled the organ in the auditorium of University Hall, then the central building of the campus, fronting State Street just east of where Angell Hall stands now. On December 14, 1894, before a full house, Professor Kelsey declared that the organ was to be named in honor of Henry Simmons Frieze. Then he formally turned it over to the Board of Regents.”Its splendid harmonies will ever please,” Kelsey said, “but those keys, touched by master hands, will speak a deeper message than that merely of beauty, of aesthetic pleasure. This organ will become an educational force in the hearts and lives of our young people…. May it touch and thrill their inmost natures…lifting them away from that which is mean and trivial into the clear shining of the ideal.”

The organ was played in University Hall for nearly 20 years, including at twice-a-week vesper services. In 1913, it was once again disassembled, moved a couple hundred yards to the north, then reinstalled—with $16,000 worth of additions—as the centerpiece of the new Hill Auditorium. (It took an estimated 100 wagon trips to roll the components over to the new site.) It was played at countless performances, including regular “Twilight Recitals” for students enjoying late-afternoon respites after class.In 1928 most of the organ’s parts were replaced in a major overhaul by Ernest Skinner—the designer whose installation in Cleveland had caused a near-riot six years earlier—but the new instrument remained the Frieze Memorial Organ. Further reconstructions and additions followed in 1955, 1985, 1990 (after extensive damage from a roof leak) and 1995, when digital circuitry and solid-state components were added. According to James Kibbie, U-M professor of organ, the Frieze instrument now contains “120 ranks [of pipes] plus an additional 4 ranks in the Echo division above the central skylight, totaling 7,599 speaking pipes.” Of those 120 ranks, a dozen ranks remain from those that were manufactured at Farrand & Votey’s factory in Detroit—the last original components of the Frieze Memorial Organ.

(Sources include James O. Wilkes, Pipe Organs of Ann Arbor (1995); James Kibbie, The Hill Auditorium Organ; James B. Angell, “A Memorial on the Life and Services of Henry Simmons Frieze” (1890); Frank D. Abbott, ed., “Musical Instruments at the World’s Columbian Exposition” (1895); Craig R. Whitney, “All the Stops: The Glorious Pipe Organ and Its American Masters” (2003), Charles H. Gray, “Musical Interests at the University of Michigan,” American University Magazine (1897); and “The U of M Organ,” The Song Journal (1895).)