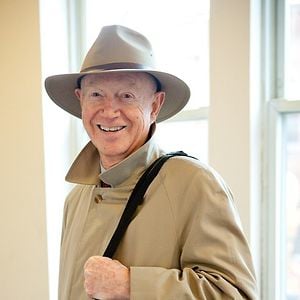 Anthony Collings joined CNN within a year of the upstart network’s launch, lending it heft and credibility with his long experience as a foreign correspondent.

This un-ending story began airing nearly 262,968 hours ago: 24-7 global TV news was born 30 years ago with the start of CNN. University of Michigan lecturer Anthony Collings was part of it from the network’s first year. Collings’ home base is now U-M’s Communication Studies Department, where he’s one among many faculty experts on broadcasting, communications and news. U-M’s had its share of television and broadcast news personalities, including Sanjay Gupta who is now CNN’s medical correspondent. But there’s something unique about Collings—Tony to his friends. Close your eyes, utter the phrase “foreign correspondent” and the mental image that pops into your head is likely to either be an image of Collings—or someone who looks remarkably like him. He still dresses like a foreign correspondent, he looks like one, seems like one, and at U-M he offers expert advice on how to deal with the media. Ironically, he was a foreign correspondent at a network where founder Ted Turner banned on-air usage of the word “foreign,” arguing that they were an international, global news organization so no one was really “foreign.” 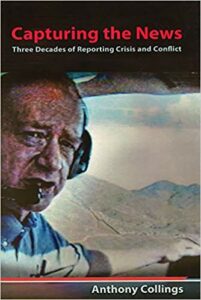 Collings’s new book describes his years as a print and television journalist.

It’s been nearly 25 years since he returned home from his postings as a foreign correspondent (he worked as CNN’s Washington correspondent before coming to U-M in 1997), but “the look” and even “the sound”—from his choice of words to his enunciation—are still there. He writes like a foreign correspondent too. “So many other things in your life just get pushed to the side in your pursuit of what you see as the one great tale that will amaze and enlighten the world,” he writes in his new book. “In a sense, you are a seeker of the truth. You are an adventurer who overcomes the obstacles to truth and brings it back as a trophy.”To this holy grail of the great story you subordinate family and friends, the comforts of home, the trappings of normality, membership in society. In their place plunge yourself into the unusual and new.” Before CNN, major media outlets, which had been in business for half a century, a full century or more, decided when and how consumers got their news and what advertisers would pay. Broadcasts aired at fixed times of the day, newspapers arrived in the morning or the afternoon and government from time to time worried about a small number of newspapers and broadcast outlets holding all-powerful monopolies like public utilities.Then brash Atlanta businessman Ted Turner decided to change all that by creating Cable News Network, the first 24-hour, 7-day a week TV news operation that aired news non-stop around the world. Other all-news networks (MSNBC, Fox, CNBC, Bloomberg, Fox Business) and numerous outlets on something called the Internet would follow. But CNN was there years before the rest of them, making the first stab at something completely new. The “media elite” in those days was headquartered in places like New York and Washington, D.C.—not Atlanta—and CNN was derided as the “Chicken Noodle Network.” The new network, which hit the air at 6 p.m. on June 1, 1980, even had trouble getting equal access to campaign buses for some of the 1980 presidential candidates.So CNN sought out distinguished journalists with gravitas and “heft” who would give the new network prestige and credibility. Enter Newsweek London bureau chief Tony Collings, who became CNN’s Rome bureau chief, ending stories intoning “Anthony Collings. C-N-N.”Collings spent 34 years as a news man, working for the Associated Press, serving as a Newsweek bureau chief, covering the Middle East, Rome, Moscow, London, Paris and Washington, D.C. “Capturing the News: Three Decades of Reporting Crisis and Conflict,” is a memoir full of stories both exciting (opening with a tale of standing near a mountainside outside Beirut in 1981 when six men pointed AK-47’s at Collings and his crew and took off with them) and funny (after Polish communist police, cracking down during martial law, confiscated an expensive piece of sound equipment, CNN bureaucrats demanding Collings fill out an insurance claim—and get the police to help him do so).In the book, Collings describes his encounters with famous figures such as Ted Turner and Peter Jennings, and his meetings with people from Yasser Arafat to the Pope, from Krushchev to Muammar el-Qaddafi to Oliver North. He broke the news of the first INF (Intermediate-range Nuclear Forces) treaty between the United States and the Soviet Union and covered the Oklahoma City bombing. He offers insights explaining cultural differences between Arabs in the Middle East and Americans, between East and West, why the National Rifle Association rarely gets as much positive coverage as gun control advocates and why journalists so often rely on clichés in their news coverage.But Collings also reviews the state of journalism today, offering advice for would-be journalists as well as all who love good stories. He even explains small details most journalists don’t but should know: for example, the word journalism is derived from the French word “jour” meaning “day” because journalism is the news of the day.

And Collings, 13 years after coming to U-M, continues to stay on top of the latest news and trends. You can find him on Facebook and on Twitter. He has a blog, Capturingthenews.com, and he was one of the first people at U-M to buy his own iPad.

“We were a little network with big ambitions, but our desire to be taken seriously was constantly undercut by our own nuttiness,” he recalls. “As a journalist, you often have that feeling of strangeness, occasionally asking yourself ‘What am I doing here?’“