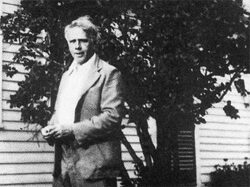 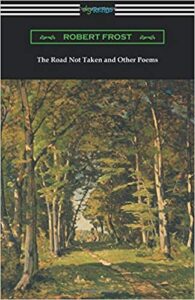 On Oct. 10, 1921, the editors of Michigan’s student literary magazine, Whimsies, each carrying his or her own poems, stepped gingerly into Professor Roy Cowden’s house on Olivia Street. Then, one by one, the young writers were introduced to their critic for the evening. He was a New England farmer in his mid-40s — “a not-at-all-trim man of medium stature, in a not-too-well-pressed grey suit, with fair, not-too-tidy hair,” recalled one student, Stella Brunt. He was also the most distinguished American poet of his generation, soon to win the first of four Pulitzer Prizes —Robert Frost.

“We had a splendid evening,” Stella wrote her mother, “and shall have them hereafter every three weeks … Robert Frost talked to me about fifteen minutes all alone, in a corner. It is genuine joy to be with him: one feels at once hopeless and determined …”

It was the beginning of a year-long friendship between Frost and the student writers of Michigan.

The poet was spending the year in Ann Arbor thanks to Marion LeRoy Burton, the charismatic pastor who had just become U-M’s sixth president. Burton endorsed the view of Raymond Hughes, president of Miami of Ohio, who recently had told fellow educators that “nothing would do more to leaven the increasing materialism of the American university than to have a great creative artist working on the campus.”

Burton approached Frost with the offer of an eight-month stipend of $5,000 (donated by the U-M Regent and former Michigan governor Chase Osborn) to become Michigan’s first Fellow in Creative Arts. The poet agreed immediately, telling Burton: “I am somewhat surprised when men of your executive authority … see it as a part of their duty to the state to encourage the arts … ” Frost and Burton had agreed he would teach no regular classes—an arrangement that irritated some off-campus skeptics, including an anonymous writer in the Washtenaw Post, who asked if the University ought to pay Frost $5,000 without asking him “to do anything, not even to twirl his thumbs, if he does not so desire.”

“The conversation of Frost sparkles … and is at its best in the pauses — when it is in his eyes, between words. He is humorous and ruthless.” — Frances Swain.
Frost hoped to write a good deal. But to keep the skeptics at bay, and to justify Burton’s trust, he embarked on strenuous rounds of public events and meetings with faculty and students. The editors of Whimsies were the prime beneficiaries. At the Cowdens’ home, Frost would avoid the big chair set out for him and instead find an “unpretentious, dim corner.”

According to Frances Swain, another of the Whimsies, “he speaks lightly enough,” but “there is a lasting significance in [his comments]. The conversation of Frost sparkles … and is at its best in the pauses — when it is in his eyes, between words. He is humorous and ruthless …  He is so very comfortable that he induces all the Whimsies in their private talk of him familiarly to call him plain ‘Robert’ or ‘Frost.'”

He was also “an excellent gossip,” she said. 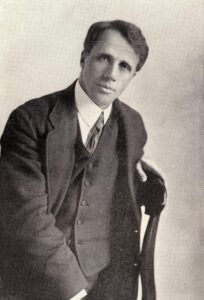 His remarks on students’ readings were “gentle” but exacting. After one unfortunate performance thudded to a close, he diplomatically broke the silence by saying, “You know, there is a difference between fetching and far-fetching … ” But even a kindly critique from Robert Frost could wreck a student’s spirits, as Stella Brunt could attest after reading four verses aloud one night.

“It was a harrowing experience,” she wrote, “especially when Robert Frost kept scolding at me over the same old faults — not making my meaning clear, and using old phrases. My nerves were all on edge to begin with, and that about unsettled me. I didn’t sleep all night.”

With the Whimsies, most of them women, Frost was a gentleman. But one of them, Ruth Lechlitner, glimpsed another side when she and a friend knocked on the door of the Frosts’ rented house at 1523 Washtenaw.

“Robert, in a well-worn grey sweater, opened it to us,” Lechlitner recalled long afterward. “He greeted me cordially, but his interest was obviously in Dee, an unusually pretty girl, and one of the first to have her hair cut in a short, curled ‘bob.’ Moreover, she had fastened her knickers well above the knee, displaying a pair of very shapely legs. I saw Frost’s swift downward glance, and an elfish glint in his eye. At this, I think I liked him better than I had at any time before.”

During his time at U-M, Frost “got to be a good deal more Ann Arboreal than I should suppose I could have at my age.”
The poet was such a hit that President Burton said he didn’t know who was more admired — Fielding Yost or Robert Frost. With realistic humility, Frost said he would schedule the next poetry reading during a Michigan football game and see which drew the larger crowd.

Frost bent to pressure to return for another year, though bad health made that stay less successful. (He wrote his most famous work, “Stopping by Woods on a Snowy Evening,” during the summer between his first and second Ann Arbor sojourns.) Burton brought Frost back for a third fellowship in 1925-26 and sealed an arrangement to make the appointment permanent. But when Burton died soon after of a heart attack, Frost decided his ties to New England were stronger than his commitment to U-M, and he changed his mind — though “I like Michigan people and I like Michigan.”

He later told a friend that he had “got to be a good deal more Ann Arboreal than I should suppose I could have at my age. A few people and streets and a lot of the outlying landscape are pretty well incorporated in me.”

Top image: Robert Frost at the house on Pontiac Trail where he and his family lived during one of his fellowships at U-M. The house was later relocated to Greenfield Village in Dearborn. Image courtesy of U-M’s Bentley Historical Library.