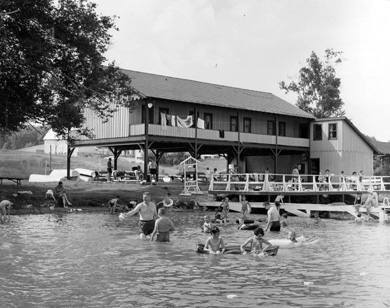 Located on Walloon Lake in Michigan’s northern lower peninsula, Camp Michigania has been a haven for alumni families for generations. (Photo courtesy Alumni Association of U-M.)

When Joyce and Herbert Furman dipped their paddles into Walloon Lake, the couple thought they were embarking on a leisurely morning canoe trip. It was not to be.They departed the lakeside camp where they were staying in northern Michigan. About 30 minutes in, however, a Boston Whaler approached. “This thing came tearing down the lake looking for us,” Joyce Furman (’53) recalls.

Get more information on Camp Michigania.
The motor boat pulled alongside and a camp staffer told the Furmans their two-year-old son, Steven, was “having a fit” in the nursery. Would someone hop aboard and return?Joyce Furman began climbing from the canoe—and capsized Herbert (’49, ’50, ’52). “I dumped my husband and the whole canoe over,” she says. 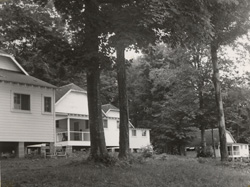 Herbert did right the canoe and paddled back. Joyce rushed to the nursery to reassure Steven. But there were no tears by then. “Steven was having a wonderful time,” she laughs. It was 1962. The place is today called Camp Michigania, on Walloon Lake. It’s about 25 minutes south of Petoskey by car. The Furmans have returned more than 20 times, bringing kids and grandchildren.”It’s a wonderful place,” says Joyce Furman. The Alumni Association of the University of Michigan owns Camp Michigania. It opened in the summer of 1961; initially based at the U-M Biological Station, it was nicknamed “bug camp.”

Like the Furmans, generations of U-M alumni flock to Camp Michigania each summer. Strangers become friends. Memories are made. The camp is in such high demand that not everyone lands a slot, though as of this posting space is available for “week 11” this summer, August 28 – September 4.

Part of the reason for its popularity is the community spirit. “It’s a place where everybody knows your name and everybody loves your kid. It’s hard to find that concept in today’s society,” says Debbie Furman (’86), daughter of Joyce and Herbert. “In today’s day and age, where can you go with your kids and say to your kids, ‘See you in four hours and have fun’? You know they’ll be safe.” But there are plenty of places to take a safe vacation with kids and friends. Why does Michigania inspire so much passion? 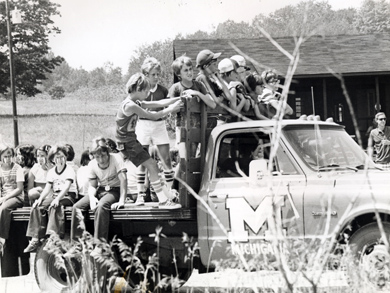 Says one frequent visitor, ‘Where can you go with your kids and say to your kids, See you in four hours and have fun? You know they’ll be safe.’ (Photo courtesy Alumni Association of U-M.)

It all began a half century ago.When the Furmans took their canoe trip, the Alumni Association leased what was then a children’s camp—Camp Huntington/Sherwood—during the post-camp season.That fall, the Association learned the owners wanted to sell the 377-acre property, provided the buyer kept the camp intact to prevent development. The Alumni Association bought the camp for about $250,000 and later renamed it Camp Michigania. The property includes woods, panoramic lake views, and more than 1-1/4 miles of lakefront. Summer, fall and winter programs are offered for U-M alumni. In summer, campers can spend a week enjoying activities such as sailing, riflery, tennis, horseback riding, arts and crafts, and more.

They also hear U-M faculty speak on topics from jazz history to hydrogen-cell batteries. The speaker series has been a long-time highlight—for campers and faculty. 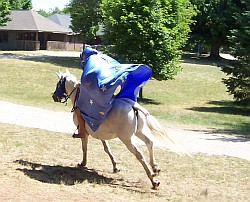 The arrival of The Unicorn is eagerly anticipated by children.

Hazen Schumacher (’50), retired director of broadcasting at U-M and one-time host of the NPR radio program “Jazz Revisited,” has given upwards of 30 talks since 1968. He’s discussed jazz history and media technology, including the emerging development many years ago of cable-TV and satellite.”What I love most is how nice people are,” says Schumacher. “The whole week is a big love fest.” Many campers return the same week each summer, such as “fourth week.” “We’ve got a family who bought a house a quarter mile away and they still come back to camp their week.” says Mitch Rosenwasser, camp director since 2002. About 100 families visit Michigania weekly during the popular summer period. Nearly all eleven weeks of summer camp sell out by early January. More than 100 families are wait-listed yearly. The Alumni Association also operates a summer camp, Michigania-East, in upstate New York.

Even adults find that camp brings out their playful qualities. Above, a hand-fashioned parade. Below, tug-of-war. (Photos courtesy Alumni Association of U-M).

Camp Michigania is the brainchild of Bob Forman, head of the Alumni Association when it bought the Walloon Lake property. “It was created to connect alumni to each other and to U-M,” says Rosenwasser. Forman succeeded. Friendships begin.”That’s how we’ve built lasting friendships to this day,” says Helen Kerwin (’57), who met Joyce Furman at Michigania in the seventies. “She and I have been close friends ever since.”Much has changed since early on. A new dining hall was just completed, and campers have more meal choices. The cabins offer one- and two-bedroom units, hot showers, desks, a common room, and a porch. A new arts and crafts center and nature center have been built. It wasn’t always that way. A shower, for example, required a quarter-mile walk. “There was little privacy. Some parents would hang sheets across the rafters of the cabin to separate their bed from the rest of the family,” recalls long-time camper Edie Resnick (’48). “Old timers used to complain camp had gotten too fancy. I, for one, don’t miss seeing the ground though the floorboards.”Legends, too, have developed—such as the Unicorn. The horned, horse-like creature appears near the end of each week in summer, galloping by the arts and crafts center. A wizard on top dispenses goodies to kids awaiting the Unicorn’s rumored arrival. At other times, hoards of three- and four-year-olds will sail out onto the lake in search of “Puff the Magic Dragon.”And stories abound of pranks by campers—and even camp staff.Faculty speaker Schumacher recalls that many years ago the camp staff asked whether he wanted a glass of water on the lectern for his talk at that evening’s Faculty Forum presentation. “Sure,” responded Schumacher. During the talk, Schumacher lifted the glass to take a gulp.”I smelled it. It was pure gin,” he says. “Fortunately, I didn’t chug-a-lug it.”

A lot has changed at Michigania over the years, but the essentials remain the same. (Photo courtesy Alumni Association of U-M.)

Stories like these are the hallmark of all summer camps. Generations of kids have returned to their homes and neighborhoods with funny tales and lasting memories. But for most people, the memory-making ends at about age 16, when they stop attending camp. After that, they’ve got a lifetime to look back at increasingly distant good times. But Michigania offers space and activities for adults as well as kids (and even for hard-to-please teens, who end the week-long sessions with a “Last Chance Teen Dance” on Friday.) The camp gives parents and grandparents an opportunity to play, to goof around and play pranks and get back in touch with their own most playful selves. Or in the words of Steven Furman—the same Steven who played a role in his parents’ canoe-tipping—”Camp has always been a way to get away from the day-to-day activities of life.” In these fast-paced and stressed out times, the chance to do that, surrounded by family and friends, is a real treasure.

Have you been to Camp Michigania? What are your favorite memories? Share your stories in the comment section below.