He's got the power

Commander William Mayes (’94, MSE ’02) is an Electricity Plans Officer with the US Navy in Iraq. As the United States’ combat mission winds down, experts like Mayes—who is helping to build Iraq’s electrical capacity and infrastructure—are becoming ever more vital to a successful peace. Michigan Today caught up with Commander Mayes in Baghdad via email. 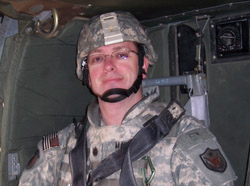 Commander William Mayes travels around Iraq helping to build its electrical infrastructure. The country’s security situation is improving, he says, though it remains dangerous.

What is your day-to-day work like? What obstacles do you face?

My job title is “Electricity Plans Officer.” I work at the US Embassy in Baghdad with state department personnel, and other US military officers. My day-to-day work involves engagements with the Iraqi Ministry of Electricity officials, and assessments of current electricity production issues in Iraq. The US government has spent over four billion dollars in electricity production and distribution projects over the last few years, and this has improved the electricity supply situation in Iraq dramatically. There is still a lot more work to do, as rolling blackouts are the daily norm throughout Iraq. The government of Iraq is now engaged in the process of bringing 24 hours of reliable electricity to all to the Iraqi people, but this will take a few more years.Some obstacles I face are insurgent mortar and rocket attacks aimed at the US embassy, and having to be accompanied by security teams for any trips outside the international (green) zone. This means you can’t leave the base unless it is for business. No trips to the store, walking down the street, or anything like that.

What brought you to Iraq? Were you in ROTC here at U-M?

I joined the Navy in 1992 while I was an undergrad in Aerospace Engineering. I was not in ROTC, but signed up for the Nuclear Propulsion Officer Candidate (NUPOC) program. This program enlists students into active duty in the Navy, and their only duty is to finish their degree and then report for officer training. I never would have guessed that 17 years later I would be serving on the ground in Iraq. After graduation and initial training I served aboard the USS Harry S. Truman (nuclear powered aircraft carrier) from 1996-1999. I then returned to Ann Arbor as an officer recruiter from 1999-2002. During this time I recruited engineering students into the NUPOC program, and earned a MSE degree in Aerospace Engineering. I then transferred to the Navy Reserve and served part time in the Navy while I worked for Daimler Chrysler, NewPage Paper, and finally DTE energy. After one year at the Fermi 2 Nuclear power plant, I was recalled to active duty for my current assignment in Iraq. 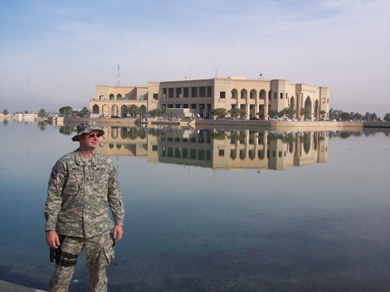 What would surprise people about Iraq now? What stories do you think we in the States are not hearing?

Much of Iraq is very green. When seen from above, northern Iraq looks like Ireland with green rolling hills. There are also a lot more trees in parts of Baghdad than I expected. Mostly palm trees, but many other kinds too. In Baghdad, most people dress like you see in European cities. You do see plenty of traditionally dressed people, and large areas of pure sand desert, but that is not all you see.Most Iraqis are very friendly, social people. The Iraqi officials I meet with speak fairly good English, and most have engineering degrees. There are many problems in this country, but things are slowly getting better. Iraq has its own pace, and it does not necessarily meet our (the US) expectations, but I am confident that in time, Iraq will have the resources and infrastructure to be a nice place to live.The stories that are not heard in the States talk about an improving security situation. Western media likes to report specific attacks, but does not mention that the attacks are getting farther and farther apart.

Based on what you said earlier, it seems that security is still a problem but that it’s improving.

Yep, that sums it up pretty well.

What are the rewards and challenges of the work?

Rewards come from working with a great group of true professionals in the US military, and state department, as well as seeing the Iraqis succeed in new power plant construction and operation. It is rewarding to see the results of all the hard work that has been done in the past and present, as electricity production reaches record highs and keeps going up.Challenges come from long working hours, and months spent away from family and friends.

Is there anything about Ann Arbor (or U-M) that you miss? Anything you took from your time at Michigan that you’re grateful to have?

I miss so many things about Ann Arbor, it is hard to start. Mostly I miss my family and friends, especially during holidays. I miss walking down the street, and going to restaurants. I miss being able to drink wine or beer with a meal. I miss not having to walk outside to another trailer to take a shower. I miss being able to choose what clothes I wear. I miss being able to hop into a car and just go wherever you feel like going. I will miss the entire Michigan football season this year. I miss the flowers, and grass. I miss playing golf.I am grateful to have a good engineering background, that started at the U-M, and has helped me in my current role tremendously. At Michigan I learned the basic tools of engineering and how to use them. I was able to step into this job, and quickly understand how the Iraqi electricity system worked, and what challenges they faced. I thought a lot about joining the Navy, starting in high school, but I always wanted to be an engineer. When I was shown a way to do both, it seemed like a cool thing to do at the time. I developed a sense of wanting to serve society slowly—starting at U-M, and then building during my active duty days in the Navy. That is why I transferred to the Navy Reserve: it gave me more time with my family, but still allowed me to serve part time, and do some pretty cool things.