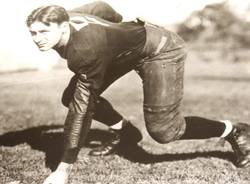 Fritz Crisler in his playing days. As U-M’s football coach his two-platoon system, with players dedicated to offense and defense, would revolutionize the game. But Crisler remained ambivalent about the world he helped create. (Photo courtesy U-M Bentley Historical Society.)

Fritz Crisler’s fingerprints are all over modern college football. Michigan’s legendary football head coach and athletic director brought the game the two-point conversion and wider goal posts that encouraged longer field goal attempts and made his influence felt in several decades of service to the NCAA Rules Committee.But none of the late Crisler’s innovations had a greater impact than two-platoon football, introduced in a bout of desperation in 1945. The 2010 season is the 65th anniversary of two-platoon football, with the different squads for defense and offense that mark the modern game. In fact, football as we know it would be impossible without platooning—players would simply be too tired, and would lack the technical skills, to play with the speed and precision today’s game demands.Prior to 1945, college football was an ironman game. Players competed all 60 minutes, playing offense, defense and special teams, with no breaks. Substitutions were rare because a player pulled from competition couldn’t return that same quarter.Notre Dame head coach Knute Rockne outsmarted the ironman game in the 1920s by employing “shock troops” to wear down the competition. Rockne would start games with his second-stringers, pulling them for his fresh starters after their opponents had exhausted themselves.But it wasn’t until 1941, with World War II raging in Europe and America’s entry a distinct possibility, that the late Rockne’s innovation was codified into law. Against Crisler’s recommendation, the rules committee voted to allow substitutions “at any time.””Those three little words changed the game forever,” Crisler recalled to many a sportswriter.

Crisler told his rules committee colleagues in 1941: “I am opposed to legalizing (free substitution). It will make changes in college football rules we don’t want.”

But Army coach Red Blaik, a proponent of free substitutions, carried the day. Ironically, four years later Crisler would debut the platoon system—and show the world just how effective it could be—against Blaik’s Army team. Free substitution football became the law of the land in 1941, but it wouldn’t become the norm for years.Crisler initially said that Michigan wouldn’t take advantage of free substitution. He and his contemporaries in the college game continued playing ironman ball, relying on their best 11 players to win the game.

Change finally came when World War Two left American campuses and football teams short of men. Red Blaik’s Army team, on the other hand, was loaded with the cream of American athletes. Blaik’s 1945 team featured the halfback duo of Mr. Inside, Doc Blanchard, the 1945 Heisman Trophy winner, and Mr. Outside, Glenn Davis, who would win the 1946 Heisman. 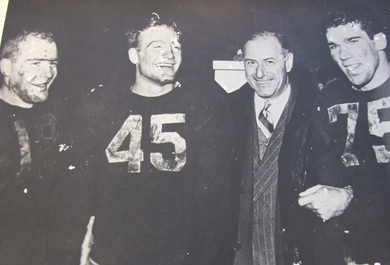 By 1947, Crisler’s ‘spindly-legged freshmen’ had matured into the Mad Magicians, one of the most powerful teams ever assembled. (left to right: Bump Elliott, Pete Elliott, Crisler and Bruce Hilkene. Photo courtesy U-M Bentley Historical Library.)

So when the Wolverines faced Army at Yankee Stadium, on October 13, 1945, Crisler knew that with half-a-dozen “spindly-legged freshmen” playing major roles, Michigan had no chance playing by ironman rules. “I reported the plan to the players and told them we might have a lot of fun,” Crisler later recalled to sportswriter W.W. Edgar. “At the end of three periods we were tied 7-7 and I knew it couldn’t last. I knew sooner or later Army would overpower us. And that’s what happened. We lost 28 to 7—but we had a lot of fun.”And started a trend that has become the norm decades later.

“When the other fellow has a thousand dollars and you have a dime, it’s time to gamble,” Crisler once recalled. “Our below-par wartime squad couldn’t possibly have stood up against that powerhouse for 60 minutes. Therefore, we gambled.” That gamble paid off during the 1947 season, as the freshmen of 1945 blossomed into grizzled specialists, heralded by sportswriters as Michigan’s “Mad Magicians.” The Magicians’ offensive play was characterized by trickery and misdirection—it wasn’t uncommon for three or four players to handle the ball on any given play. This required a level of mastery that would’ve been tough to develop with the mental and physical demands of ironman football.The Mad Magicians capped their perfect 1947 season with a 49-0 Rose Bowl victory over the Trojans of Southern California. That 10-0 season was good enough for Michigan’s ninth national championship and Coach of the Year honors for Crisler.Crisler didn’t try to repeat perfection. Recognizing the Mad Magicians as the best football team he had ever coached—and none too eager to adapt to the growing emphasis on recruiting in college ball—Crisler retired after the ’47 season. His successor, Bennie Oosterbaan, led Michigan to a 9-0 record and its tenth national championship in 1948. Oosterbaan was recognized as Coach of the Year, the first time two different coaches from the same school won the honor in consecutive seasons.Crisler was still athletic director and chair of the rules committee in 1953 when the NCAA tried to restore ironman football by banning free substitution. Some fans questioned Crisler’s motives.An Ohio State alum, Wilt Truesdell, wrote Crisler: “Michigan is ‘over the hill’ and you can’t think of a more graceful way to throw in the sponge…The shoe is on the other foot now. There are some schools in the Big 10 that have deeper material so when you can’t beat them on the gridiron, beat them with the rules.”But Crisler was not alone on the rules committee in his dismay that 50 schools had dropped football in 1952. Free substitution and platooning required much larger teams—requiring more scholarships and coaches, which smaller schools couldn’t afford. Crisler also reported that some young coaches felt they’d been cheated by only learning one “side” of football—offense or defense.But while purists may have been pleased by the return of the ironman game, most coaches, players and fans weren’t.Former Michigan Tight End Ron Kramer, whose number 87 football jersey was retired in 1956 after his senior season, told me that he would’ve preferred platooning to the ironman ball he played. Kramer’s first year of eligibility was 1954, after platooning had been banned.”When you’ve got to play both ways, you’re either going to be tired or play pretty vanilla on offense or defense,” said Kramer, who played football and basketball and ran track at U-M. “It’s not as fun of a game to play or watch.”The depletion of the fun factor had economic consequences. As one Michigan fan wrote to Crisler in 1953, “How do you go about removing 20,000 seats from a stadium?”Free substitution was finally reintroduced in 1964 and has been a staple of the modern game ever since. Crisler, a non-voting lifetime member of the rules committee, was happy to see it return.So were the players. Jerry Mader was a senior defensive end on the 1964 Michigan team. “This is duck soup!” Mader recalled thinking upon hearing that specialized football would return his senior season. Mader credits the return of platooning for the success of the 1964 team that earned the Big Ten championship and won the 1965 Rose Bowl. Almost 20 years after playing for the Crisler team that perfected platooning, “Bump” Elliott employed it to produce the best team of his decade-long tenure at Michigan.Decades after the return of two-platoon football, the worst fears of ironman purists have been realized. Football is more specialized than ever, but it’s hard to say that the game has suffered for it.Not only are there squads for offense and defense, but additional squads for special teams. Division I schools have 85 scholarships to assign, and regularly field football teams with upwards of 100 players. But bigger teams means more opportunities for young men to compete for playing time and to receive a college education.And, as purists predicted, young men who grow up as specialists in offense or defense become coaches who specialize in offense or defense. Even Michigan head coach Rich Rodriguez refers defensive matters to coordinator Greg Robinson, preferring to focus on his specialty, offense.Specialization has led to the rise of niche systems, like Rodriguez’s spread-option offense, as well as situational defenses, like the nickel (five defensive backs) and the dime (six). The move from ironman football to full-blown platooning has accompanied college football’s rise from a rah-rah pastime to a multimillion dollar enterprise that props up athletic department budgets across the country.For better and worse, college football isn’t what it used to be. We have Fritz Crisler, three little words, and a group of spindly-legged freshmen from 1945 to thank for that.