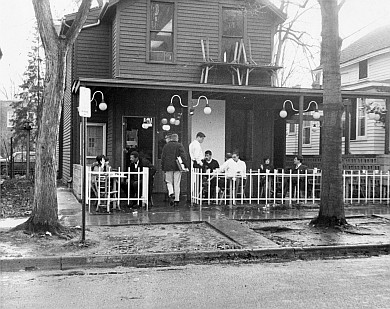 The first problem on the mind of Zevi Miller in the late 1970s ran along the following lines:

The second problem was where to find a good place to concentrate on this question for several hours at a time, day after day, month after month, while nursing a single caffeinated beverage without getting hassled to buy refills. Earning his PhD in mathematics might not depend on finding a solution to this second problem. But it would help.

So Miller would go over to 812 Monroe Street—the eccentric, rambling restaurant and bar called Casa Dominick’s—pay for a single café mocha, and sidle inconspicuously down to a booth in the basement, where he figured no one would notice him.”I spent incredible amounts of time there,” Miller remembered not long ago. “It was such a lively, cheerful place, and yet you could get work done there, too.”

Early in the 20th century, the address had been a neighborhood grocery. After World War I it became a coffee and sandwich shop. By 1959 the business was failing, and Dominick DeVarti spotted an opportunity. A Connecticut native, DeVarti had been a bomber-navigator in World War II. He came to Michigan for an engineering degree on the G.I. Bill, then worked for Kaiser Industries in Ypsilanti, then shifted to construction. He bought and sold three pizzerias (one of them, in Ypsi, to Tom Monaghan; it became the first Domino’s, its name inspired by the original owner), and ran unsuccessfully for mayor of Ann Arbor on the Republican ticket in 1957.

About that time, DeVarti saw that 812 Monroe Street—within a few steps of the Law School, the School of Business Administration, the College of Art and Architecture and the School of Education—couldn’t miss as a student emporium if only he could get the food right. So he bought the place in 1959, brought in pizza and Italian submarines—exotic casual fare in those days—and when he won a liquor license, he began to serve homemade sangria in glass jars. Dominick’s was soon the preeminent student hangout in town. In the early 1960s, movie enthusiasts gathered there to found the Ann Arbor Film Festival, and it became the informal point of rendezvous for the radical Students for a Democratic Society.

In the 1970s, DeVarti bought the house next door and joined the two together, with outdoor seating in front and back. For a while he ran a separate white-tablecloth Italian restaurant upstairs, then shifted to Vietnamese food, then turned the second story back over to the pizza-and-sandwich operation. In all those long afternoons with his single café mocha, Zevi Miller often saw Dominick make his rounds through the place. But neither Dominick nor anyone else ever so much as hinted that Miller should either purchase a second café mocha or move along. Miller concluded that no one had even noticed his routine. He had been just another anonymous student in the crowd. After many, many hours, he concluded that, given certain other things:

That done, Miller was awarded his PhD. His extended explication of the problem he had solved was published in “Transactions of the American Mathematical Society” in 1982. He joined the Department of Mathematics and Statistics at Miami University in Oxford, Ohio, where he went on to new research in graph theory, graph embeddings, combinatorics and theoretical computer science.

One autumn 10 or 12 years after Professor Miller completed his doctorate, he went back to Ann Arbor to see Miami play Michigan. Before the game, he stopped by Dominick’s. At the counter he found Dominick’s son Rich DeVarti, who had taken over management of the place. Miller told Rich that he remembered Rich’s dad well.”He’s out in back,” Rich said. “Go say hello.”In the garden courtyard where students and football fans filled the benches and chairs, Miller found Dominick DeVarti at his customary table. Dominick looked up at him.”Hey,” Dominick said, “I remember you. You used to go downstairs and sit all afternoon with one mocha.”

Rich DeVarti continues to run the place, which still thrives, its menu much the same as it was in the late 1970s, its tables still favored by students in law, business and education, among others. Dominick DeVarti died in 2001.

“The funny thing is,” Zevi Miller said, “he’s the only guy in the world who knew about that part of me—that little ritual that was so important to me.”I’m glad it’s still thriving and I hope it goes on.”

Were you a habitué of Dominick’s? Love their pizza? The patio? Share your memories in the comments section below.