The Doors' disaster at Michigan 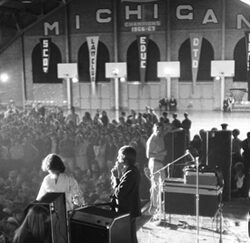 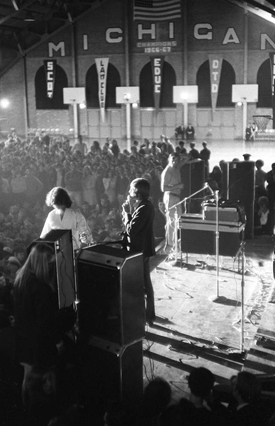 ‘I WAS A BIG FAN’ OF THE DOORS, RECALLS FRED LABOUR. BUT THEN SINGER JIM MORRISON CAME ON STAGE VERY LATE, AND VERY DRUNK. (PHOTO: JAY CASSIDY.)

These days the University of Michigan doesn’t seem to get too excited over homecoming. But in the 1960s it was a different story. Back then the weekend’s schedule of events often read like a scene from the movie “Animal House.”

During the ’60s, homecoming weekend also featured concerts by one or more prominent national music acts, including such notables as the Righteous Brothers, the Four Tops, the Beach Boys, and Dionne Warwick. For 1967 the organizers lined up folksinger Buffy Sainte-Marie, jazz pianist Ramsey Lewis, and, for the Friday night dance at the Intramural Sports Building, the Doors.

When the Doors took the stage on the evening of Oct. 20, the surprisingly small audience was in for a unique experience—but for all the wrong reasons. The concert would turn out to be a memorable disaster. But beyond disappointing hundreds of fans, that fateful show would also prove to be an event that may well have altered the history of rock and roll.

Among those in the crowd that night was 19-year-old U-M sophomore Fred LaBour, who happily paid $3 for himself and a date to see the band whose hypnotic single “Light My Fire” had been burning up the charts since June.

“I was a big fan,” recalls LaBour, today better known as “Too Slim” of the country and western act Riders in the Sky. (He was also one of the prime sources behind the 1969 rumor that Paul McCartney was dead.) “I loved the first album, front to back. The weird circus grooves, the poetry, ‘The End,’ even a Kurt Weill song. Such a unique, compelling sound.” 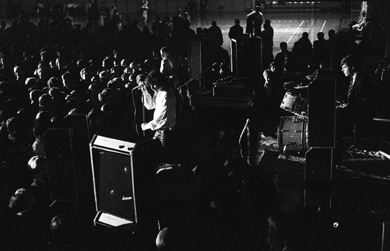 BEFORE IT ALL WENT WRONG: THE DOORS ON STAGE AT THE UNIVERSITY OF MICHIGAN INTRAMURAL BUILDING IN OCTOBER, 1967. (PHOTO: JAY CASSIDY.)

The opening act that evening was the Long Island Sound, one of the campus’s top dance bands. By all accounts their set was well-received, and included a number of tracks from the Beatles’ “Sgt. Pepper’s Lonely Hearts Club Band,” released only a few months before.

Then it was time for the Doors, who took the stage to enthusiastic applause—but without singer Jim Morrison. The other three band members launched into the opening riff of their song “Soul Kitchen,” which they proceeded to play over and over while everyone waited for Morrison to appear.

“After a while it started to get uncomfortable,” says Fred LaBour. “There was scattered booing.” LaBour recalls that the band withdrew and then returned about half an hour later, this time accompanied by their charismatic bad-boy vocalist, who seemed in no condition to be on stage. “Morrison could barely stand up. He was practically falling on his face every few moments.” 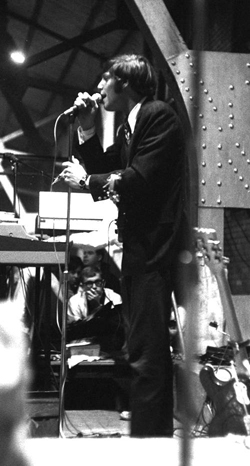 The Long Island Sound’s Steve Welkom, who had stayed to hear the Doors, remembers Morrison lurching up to the microphone and making weird sounds that the audience soon realized were words—and that the words were f-bombs.

“At the time it was kind of an outrageous thing to say,” explains Welkom. “The girls started to blush, and guys were putting their hands over the girls’ ears. These were guys with crew cuts. They were football players. It wasn’t the hippest dance you could possibly imagine.”

The atmosphere in the unseasonably warm gymnasium grew tense as the audience’s shock turned to anger. The Long Island Sound’s Gary Munce recalls that Morrison was “in a foul state of mind” and proceeded to crank up the temperature a few more degrees when he started throwing things into the crowd.

“That’s when it got really nasty.”

At some point the police were called and the the pie-eyed singer was persuaded to leave the stage, very likely averting an outbreak of violence.

“People were mad,” recalls Steve Welkom. “The place was in chaos.”

Doors keyboardist Ray Manzarek remembers that evening well. It all started, he says, when the band decided to stop for a frosty treat while riding in the limo from Detroit to Ann Arbor.

“We all wanted some ice cream,” explains Manzarek. “But Jim says, ‘Ice cream is for babies. I want whiskey.’So we had to stop at a liquor store and buy a bottle of booze.”

Something about the others eating their ice cream seemed to set Morrison off, and for the rest of the trip he sat in the back, drinking sullenly.

By the time they reached Ann Arbor, remembers Manzarek, the singer was “drunk as a skunk.” When he finally came out on stage he was unable, and perhaps unwilling, to perform.

“He was missing all the cues, and at some point started berating the audience. I’m thinking, ‘Jim, do not anger these guys! These are football players. Look at the thickness of their necks!’ But he just kept going on and on.” 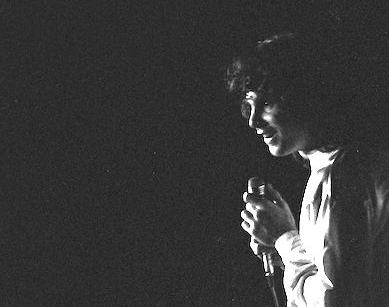 AT THE SHOW’S BEGINNING, JIM MORRISON WAS SO INEBRIATED HE COULD BARELY STAND. BUT AT THE END OF THE NIGHT, WHEN MOST OF THE CROWD HAD DEPARTED, THE DOORS RETURNED TO THE STAGE TO DELIVER WHAT WELKOM DESCRIBED AS ONE OF THE BEST CONCERTS HE’S EVER SEEN. (PHOTO: JAY CASSIDY.)

A desperate Manzarek grabbed up a guitar and fingered a few blues chords, hoping to get something—anything—going. But “Morrison was too stoned to even sing the blues.”

Eventually the befuddled vocalist simply sat down on the riser. “I was totally shocked,” says Manzarek. “It was the first time he’d been that messed up on stage.”

Riders on the storm

Unfortunately it wasn’t the last. The brief remainder of Jim Morrison’s life would be filled with similar incidents—such as the show two days later at Williams College in Massachusetts, where before a hopelessly bewildered audience the singer staggered about in a daze and finally fell to the stage, sobbing.

It’s the Michigan fiasco, though, that really seems to stick out for Ray Manzarek—especially the memory of the angry, hulking linebackers with their coiffured dates. He’s grateful that the band was allowed to limp away unharmed.

“Jim put his arm over my shoulder and I helped him off the stage, and that was the end of the evening, man.”

At least one person found inspiration in Morrison’s strange, stumbling, antagonistic behavior: former U-M student Jim Osterberg, known today as Iggy Pop.
For the Doors, perhaps—but not for the Long Island Sound, who stepped in to become the heroes of the hour.

“The guys who were doing the dance came running up and asked us to play another set,” remembers Steve Welkom. “So we jumped up and started playing and everybody started dancing and it was great. We won the whole crowd, and everybody was happy.”

Even so, many probably felt the same disappointment as Fred LaBour at not getting to see the Doors perform. “I remember thinking, ‘What a crummy show.’ Jim Morrison wasn’t much of an entertainer that night, unless you happen to like watching out-of-control drunks careen and stagger, wondering how far they’ll go.”

Hello, I love you

At least one person in the crowd thought differently, however—a U-M dropout named Jim Osterberg, who had recently started his own rock band. Like most others, Osterberg watched in astonishment as Morrison stumbled around the stage, making strange noises, swearing, and generally antagonizing the audience. Except instead of being annoyed by the singer’s behavior, Osterberg thought it was cool.

Inspired by what he had witnessed, the former member of the Ann Arbor High debate team adopted the nom de guerre of Iggy Pop, and with his band the Stooges went on to alter rock and roll history. His outrageous onstage antics and heedless, often belligerent attitude toward his fans—as well as his apparent lack of musical ability—helped encourage a generation of young rebels to pick up guitars and launch the punk rock phenomenon of the late ’70s. 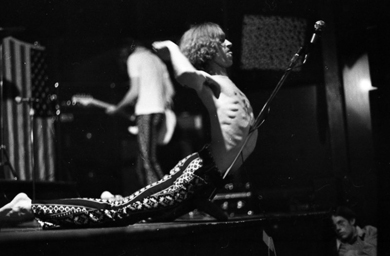 “At the time [Iggy] was being reviled, around 1970, rock music revolved around virtuosity,” says Paul Trynka, former editor of Mojo magazine and author of the biography Iggy Pop: Open Up and Bleed. “Once his impact was felt, from 1977, rock music revolved around feelings, emotions—like boredom, frustration, incoherent rage, and the joy of loud, explosive rock and roll. Without Iggy there’d be no Sex Pistols, no Nirvana, no White Stripes.”

Which makes it even more fascinating to consider that if the impressionable young Jim Osterberg had stuck around a little while longer that night at the I-M building, the world might have been denied—for better or worse—the powerful influence of punk rock’s original psychopath. Because it seems that after almost everyone had left, the Doors returned to the stage, complete with an inexplicably sober Jim Morrison, and played an entire set of their material, flawlessly.

“It was unbelievable,” says Steve Welkom. “I sat there with my girlfriend, and we just couldn’t believe it. The Doors sounded phenomenal. But there was almost nobody there to appreciate it.”

When the music’s over

Welkom understands the skepticism that often greets his telling of this story. “Fortunately I have a corroborating witness—my girlfriend, who is now my wife.”

His recollections are also backed up by bandmate John Nemerovski, and by a letter published in the Michigan Daily a few days after the dance. (There was no review.)

“I’ve been in the music business my whole life,” says Welkom, marveling at the memory of it all, “and that second set by the Doors was one of the top five shows I’ve ever seen.”

Were you at the Doors’ Michigan concert? Or at other shows at the IM building? What’s the best (or worst) concert you ever saw in college? Share your memories in the comments section below.