It’s a story that couldn’t have happened ten years ago. With a good idea, raw talent, and a lot of luck, a group of U-M students and alumni gained national recognition after posting videos of a student-produced musical on YouTube. The musical? A parody of the Harry Potter series called “A Very Potter Musical” (AVPM). Within days of posting, theirs became one of the most watched channels on YouTube worldwide, ultimately garnering millions of views, and some very dedicated fans.According to Brian Holden ’08, one of the writers of AVPM, he and his roommate, Nick Lang ’08, posted the videos so that members of the cast would be able to watch. They never intended them for a wider audience and certainly couldn’t have expected them to become so popular, and to take off so quickly. Holden and Lang, having graduated the year before, were living in L.A. at the time and had returned to Ann Arbor to put on the musical with a bunch of their theater department friends.

Above: Video from StarKid’s “A Very Potter Musical.” When the student theater company posted it on YouTube, their musical became an international sensation.

Holden was waiting tables and Lang felt the economic crisis firsthand when he was a casualty of layoffs at Disney, so when Lang’s brother, Matt Lang ’09, at the time a senior at U-M, decided to finally put together the musical that he and his friends had been talking about for years, they were on board. The three of them wrote the script over the phone. Holden and Lang returned to Ann Arbor, where their friends Darren Criss ’09 and A.J. Holmes ’11 put together some musical numbers. They quickly cast the musical, most of the roles having been written with a particular person in mind, with Criss taking the lead playing Harry Potter. AVPM had a very short run in April 2009 as part of the University’s Basement Arts program. Shortly thereafter, the school year came to an end and the cast of AVPM dispersed.

After the videos from the stage performance of AVPM were posted on YouTube, fans immediately wanted to know what this group called StarKid would be putting out next. In response, they posted a short scripted series called “Little White Lie”, which a few members of StarKid had created two years earlier. The show follows a brother and sister as they put together a garage band, finding success and a whole lot of drama. Unlike other StarKid productions, “Little White Lie” is not a musical or even a comedy, nor was it performed on stage. However, with Criss writing some music for the show, as well as playing a part along with Lauren Lopez ’09 (whose characterization of Draco Malfoy in AVPM made her a favorite of StarKid fans), “Little White Lie” instantly became a huge hit. StarKid followed with another original production, “Me and My Dick,” a musical about exactly what the title implies. This Basement Arts production ultimately gained national success when the soundtrack, having been made available for purchase on iTunes, came in at #11 in Billboard’s “Original Cast Recording” category, the first time a non-commercial student production had ever done so. Then, in May of 2010, only a year after they performed AVPM, StarKid returned to Ann Arbor to put on “A Very Potter Sequel” (AVPS). They had thousands of requests from fans all over the country for the few hundred available tickets. StarKid had emerged as a legitimate entity, something more than just a bunch of kids playing around. Still, the nature of StarKid remained a bit nebulous, and the troupe spent the months following AVPS calculating their next move.Up to this point, StarKid had remained something of a side project for most of its members, interrupting their routines only occasionally to appear at Harry Potter-related fan conventions or the production of a new musical, with not all members of StarKid being involved in each production. But commercial success through t-shirt and record sales convinced them that they not only had a loyal fan base, but people willing to financially support their endeavors, opening up a world of possibilities. 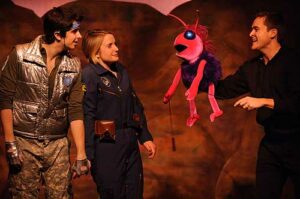 In the Fall of 2010, StarKid converged on Chicago to begin production on “Starship,” a musical comedy set in the distant future on an alien planet inhabited by a race of giant bugs. “Starship” would be their fourth musical and the first to be performed outside Ann Arbor. Without U-M’s Walgreen Center and other resources at their disposal, this time StarKid was on their own, and many of the members were now leaving behind well-established lives in order to start afresh on this latest project. It was a gamble to set out on their own, Albain said, but they were at a point in their lives where they were ready to make a change and take a chance. Holden added, “Honestly, things were bad enough that we could just leave everything else behind.”Production of “Starship” truly was a group effort. Matt Lang, Joe Walker ’09, Brian Holden, and Nick Lang all wrote the book. Darren Criss wrote the original music and lyrics from L.A., where he is currently appearing on the hit television show “Glee.”Criss’s growing celebrity has brought new possibilities–and new challenges. His TV work gave StarKid a higher profile, but also meant that he could not perform in “Starship.” “I would say that Darren’s involvement in ‘Glee’ has certainly brought a new attention to StarKid,” said Julia Albain. “MTV came out and did a segment on ‘Starship,’ and I certainly attribute some of that to Darren’s new fame.” But he was only able to work on “Starship” for “short stints,” and, Albain said, “I know that he felt both pulled in many directions work-wise, but also just in a sense of being away from the process and his friends.”Of “Starship”‘s cast of 13 actors, most of whom play multiple roles, 12 are from U-M, and ten have been in previous StarKid productions. Joey Richter ’11, the only cast member still enrolled at U-M, commuted to Chicago every week for rehearsals, and then spent two weeks there for the twelve-show run in mid-February, all while still maintaining his status as a full-time student. “Starship” proved to be an expensive production, and StarKid soon realized just how much they had been given for free as students. In addition to the baker’s dozen of actors, the production required elaborate scenery, lighting, costume and sound design, production managers, a music director and musicians, a film crew, and many others working behind the scenes. Fortunately, a year and a half of saving money from the sales of merchandise and online records, autograph signings and event appearances, combined with monetary donations from fans, left StarKid with a store of money to pay for their production costs. According to Holden, the sole investors in “Starship” were the fans.Still, StarKid was taking a big chance by leaving behind their old jobs and homes, and putting all the money they’d saved into their newest venture.

Tickets to “Starship” went on sale months before it went into production. The theater contained upwards of one hundred and sixty seats and tickets were selling at $25 a piece. In less than a week, “Starship” completely sold out. Fans flocked to Chicago from all over the country. One fan even came in from Austria, watching “Starship” three nights in a row. Another saw all twelve performances. With an array of pop culture references, witty dialogue, catchy musical numbers, and even a few playful stabs at their friend Darren and his recent stint on “Glee,” “Starship” appealed to its relatively young fan base, and the intimate setting of the small theater lent itself to a communal atmosphere. This was, after all, a theater company composed entirely of people in their early- to mid-twenties who relied completely on the support given them by members of that same demographic. On closing night, as the crowd roared with laughter, cheered and sighed, their eyes darting back and forth in order to catch every little bit of the performance, to note the facial expressions of the actors, the brilliant colors of the puppets, it was clear that “Starship” was a success.While the members of StarKid have many ideas for the future, they have no concrete plans. On the night of their final performance, shortly before going backstage to get into their costumes, the members seemed a bit weary, but though they have put in a tremendous amount of work, they still act as though success has come too easily or too quickly, and can’t get over what they describe as “dumb luck.”They have yet to become used to their “fame,” a term they hesitate even to use in describing themselves, and continue to be grateful for every opportunity they have. “It’s a leap of faith—you have no idea how long it’s going to last or what it’s going to become,” says Albain. “Right now this feels right and worth it…we’re just taking it as it is. Whether this continues for ten years or whether this is the last thing that gets done, it is fully worth it.” It is this attitude that sets StarKid apart from so many others trying to make it as actors, writers, or musicians. “It is just a commitment to making opportunities for yourself instead of sitting around and waiting for them to come to you,” says Albain. Adding to this sentiment, Nick Lang imparts a piece of advice that has become a sort of mantra for StarKid: “Don’t wait for other people to tell you whether you can do something. You can do something whenever you want.”

Are you a fan of StarKid? Did you see any of their productions on campus, or in Chicago? Share your favorite moments in the comments section.