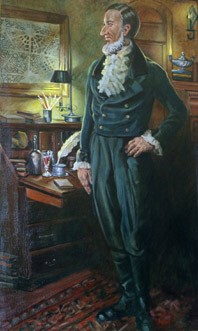 In September 1817, a little crowd gathered to dedicate a raw frame building at the corner of Congress and Bates in the village of Detroit, about a block north of where Detroit City Hall now stands. Two stories high, 40 feet long by 20 feet wide, this was the first edifice that one might call the University of Michigan.

Except it wasn’t called that. Not by a long shot.

The new institution—thanks to its chief designer, Augustus Brevoort Woodward, chief justice of the Supreme Court of the Michigan Territory—was supposed to be known by the tongue-twisting title of Catholepistemiad (pronounced cath-oh-lep-iss-TEEM-ee-add), a term that Woodward had dreamed up himself. He said Catholepistemiad meant “system of universal science.” As a bow to the obvious, he conceded that it might also be called “the University of Michigania.”His fellow Detroiters—a tough crowd of a couple thousand hunters, shopkeepers, boatmen, soldiers and half-Americanized Frenchmen—apparently just rolled their eyes. And Woodward’s unpronounceable coinage helped to smother the little educational experiment before it got out of its crib.

Woodward, born in 1774 and brought up in New York City, where he graduated from Columbia College, had always been fascinated by science. As a boy he had wondered what the sun was made of and soon wrote a treatise on the subject. (He theorized the existence of a sunny substance he called “electron,” no relation to the subatomic particle discovered much later.)

He grew into a gangly, long-nosed, eccentric bachelor, a dead ringer for the Disney image of Washington Irving’s Ichabod Crane, the ghost-ridden schoolmaster of “The Legend of Sleepy Hollow.” It’s even been suggested that Irving knew Woodward as a young man in New York and used his physique as a model for Ichabod. Woodward might have become such a schoolmaster had it not been for a sojourn in Washington, D.C., where he impressed a very important figure, Thomas Jefferson. As president, Jefferson wanted young men loyal to him and his Democratic-Republican party in key positions out on the frontier. So he sent Woodward to Detroit as the Michigan Territory’s chief justice, a grand title for a jack-of-all-trades political job that included drawing up new laws.

Woodward got to Detroit in 1805 just after a fire destroyed most of the village. He had been impressed by Pierre L’Enfant’s elegant plan for the streets of Washington. Now he sketched a similar plan for Detroit, the remnants of which are visible in the city’s six great spoke-like avenues—Jefferson (named for Woodward’s hero), Gratiot, Grand River, Michigan, Fort, and—that’s right—Woodward Avenue. The judge, apparently with a wink, insisted he had not named the street after himself. “It runs wood-ward,” he said, long before the rise of Oakland County’s sprawling suburbs. “Toward the woods.”

Detroiters quickly decided the judge was one odd duck, if decidedly bright. Though never married, he enjoyed the company of ladies, a number of whom he once invited to his home for a meal at which he served each guest one raisin, one almond, a tiny piece of candy and a tiny cake. His speculations in land prompted accusations of “private and sinister schemes,” and though he escaped serious scandal, he was unpopular for years. In the War of 1812 he stood up to the British occupiers of Detroit. That restored his political reputation, but he still had few friends.

“He was the most interested in purely intellectual pursuits of any man at that time in Michigan,” one historian wrote, “and found few to sympathize or appreciate him or his endeavors.”

Reading alone night after night, Woodward brooded on the mass of new information that was crowding the world’s libraries. It had to be organized, he believed, writing Jefferson in 1813: “The arrangement and classification of all human knowledge is essentially associated with its future advance and improvement.”

Then, remarkably, he decided to take on the job himself. He studied every system for the classification of knowledge devised so far, from the ancient Greeks and Romans to the Chinese, the Arabs, the Hindus and Enlightenment Europeans. He convinced himself that the key to a good system would be a totally new nomenclature—a precise system of names for scholarly subjects and sciences that speakers of every language could share.

He proceeded to divide up all knowledge and give his own names—derived, he said, from Greek—to each of 63 branches: chymia for chemistry, anthropoglossica for literature, iatrica for medicine, and so on.

Published in 1816 as “A System of Universal Science,” this was the template Woodward applied when Detroit’s leaders decided it was time to set up a system of schools for the territory. As with his city plan, Woodward sketched a grand design. He imagined a great university at the center of a spoke-like system of primary and secondary schools—a Catholepistemiad comprising 13 didaxiim (departments), each led by a didactor (professor). Where colleges on the Atlantic seaboard were wholly private, this was understood to be a public institution, supported by public funds and designed for the good of all.

On the one hand, it was a carefully drawn design with a strong foundation in the educational system of Napoleonic France, then the most innovative social force in the western world. On the other hand, it was the kind of thing that a bookish loner in a small town dreams up when he has a lot of spare time and not much work to do. That was apparently the way it struck most people around town, including Lewis Cass, the territorial governor, who thought Woodward’s terminology was so “pedantic and uncouth” that he didn’t even publish it for 17 months. When he finally did, and Detroiters read it, they hooted and howled. One member of Detroit’s Pig-Tail Club—otherwise lost to history but quite possibly an informal association of card-players and beer-drinkers—put this ad in the “Detroit Gazette”:

The members of the old Pig-Tail Club are respectfully informed, that the new name of the institution has been altered, agreeably to the New Nomenclature, to that of the “Pigtailania Society of Michigania.” The annual meeting of the society—will be holden at Gruntania Place, near Woodward Avenue, on Monday evening next, at 6 o’clock. Gentlemen desirous of joining the society, and learning the polite accomplishment of squealing scientifically, must make application to the head Squealer on or before Monday noon…

There was no money to fund anything close to Woodward’s plan, just a grade school and an “academy”—what we would call a high school. His nomenclature was officially dropped after a few years, and the school, which struggled along for a few more years, was often called simply the College of Detroit. Yet that building on Congress and Bates was, in fact, the first University of Michigan.

When Michigan became a state in 1837, the new constitution declared a do-over and recreated the university in Ann Arbor, where the departments were given their familiar names. The old experiment in Detroit was nearly forgotten. In the 1840s, when Lewis Cass was a U.S. senator, someone asked him what the term “College of Detroit” had once referred to. The former territorial governor thought for a minute, then said: “Ah, I have it. The College of Detroit was the nest egg of the University of Michigan. The university had been incorporated by an act of the governor and judges, drawn up by Judge Woodward, by such a pedantic and uncouth name, that even if we could recollect it, which was difficult, we always refused to adopt, and we chose to call it the ‘College of Detroit.’ The name given in the act I have forgotten. Let me reflect a moment. Ah, it was the Catho—Catholepistemiad…”

To many of his neighbors in that isolated town on the western frontier, Woodward was little more than a tolerated kook. But we can see now that, despite his quirks, he was something of a visionary. As an early chronicler of his life wrote: “To Woodward a university was a place for the conservation and the advancement of all human knowledge.” That’s precisely how we define the aim of the University of Michigan today.