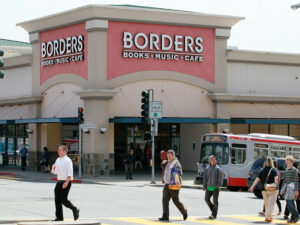 It’s tough for any free-lance writer to make a living—but it was a lot easier with a friendly bookstore on your side, helping you from start to finish. It wasn’t that long ago that if you wanted to buy a book, there was no Kindle or Nook or amazon.com—or internet, for that matter. There weren’t even big book chains. You had to go to one of those narrow stores in mini-malls that sold an equally narrow selection of paperback best-sellers and thrillers and romance novels. But then Tom and Louis Borders—U-M graduate students—changed all that. (Beware the grad student who puts aside his thesis to go into business.) After a few years, they decided to go big, opening a two-story shop on State Street, where they created an inventory system that ensured the books people were actually buying would get replaced within days—or hours.

They stocked almost everything. They gave customers room to relax and read. And they hired people who weren’t just clerks, but readers. George Will once wrote that if you asked a Borders’ employee where you could find “Billy Budd,” they wouldn’t tell you, “He doesn’t work here.” When I applied for a job there in college, they didn’t just hand me an application, but a test on literature—which I failed. But if they wouldn’t let me sell books, they still let me buy them, so perhaps it was just as well. I bought everything from Mark Twain’s “Innocents Abroad” to Hemingway’s “Nick Adams Stories” to Rachel Carson’s “Silent Spring” to Kurt Vonnegut’s “Slaughterhouse Five.” I was diving into a brave new world of literature, one that had no end. It was a heady time. Typically, I’d walk in to get one book, right before class, and walk out with four—an hour later. For a while there, I spent over a thousand dollars a year at Borders, quickly followed by a few hundred more for book shelves. When Borders spread across the state and then the country, we Michigan alums took an unearned pride in seeing the rest of the country love Borders as much as we did. If you wanted to get a taste of your college days, all you had to do was mail order something from Zingerman’s and step into your local Borders, and you were halfway back to Ann Arbor. But in the nineties, Borders conceded the internet to amazon.com, then in the last few years seemed to embark on a strategy designed not to effect a stirring comeback, but a slow retreat, which inevitably ended when Borders announced it was going out of business this summer. (It followed another beloved Ann Arbor institution, Shaman Drum, which for years had been the bookstore of choice for textbooks. Despite professors’ efforts to keep it afloat, the internet finished it off, too.)

This week I visited my local Border’s, Store Number One, right on Liberty, for the last time. I toured my favorite sections, literature and history, but also stopped by the children’s department, where I had picked out Dr. Seuss books for my nieces years ago. The oldest is now in college. I visited the travel stacks, where I planned trips to Turkey and Thailand, Spain and South America. I also bought books to teach me just enough of the native languages to get me into trouble, but not quite enough to get me out of it. I must have bought the cheaper ones. But I didn’t need to get on a plane to go places. Pick up a good book—completely portable, no plugs or batteries needed—and you can go anywhere you want, even back in time, in just minutes. Sitting on the benches and seats and easy chairs that occupied every corner of Border’s two-story palace of books, this is the adventure I went on every week.In 1989, in the State Street store’s reference section, I picked up a copy of “Writer’s Market,” because my writing instructor told me it was the bible for free-lance writers. I saved it. A few days ago, I pulled it out to take a look. In the back pages I had listed all the publications where I sent my articles, full of hope. I also recorded when they were returned, and what the editors had said. That first year, all but one rejected them. Thank you, Motor Trend. When that issue came out, with my piece titled, “Confessions of an Automotive Idiot” filling the back page, I went down to Borders to pick up ten copies of the magazine. I will never forget the private pride I felt walking up to the counter to buy something that, for once, had not been written by someone else.I kept buying “Writer’s Market” every year and sending out my stories. After a decade, I published my first book. I wrote my second book in Borders’ second-floor café—where I also listened to book readings of my friends, and of the famous—where the windows overlook the Michigan Theater. There were worse places to work.A few years ago, when my book with Bo Schembechler came out, Borders gave it a big display in every store in the country, but Store Number One sold more copies than all of them, making it one of their best-sellers. I was thrilled to give a little something back. I spent hours signing them, and the staff became colleagues, even friends.During my last visit, one of them approached me. “Hey, John, can I help you find anything?””No, thanks,” I said, then waved my arm over the entire store. “I just came to say goodbye to an old friend.” I shook his hand. “Thanks. For everything.”He nodded, keeping a stiff upper lip, then walked off to help someone else.

What about you? What do you remember about Borders? Did you work there? Spend time there during its heyday? Share your thoughts and stories in the comments section. 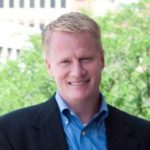 JOHN U. BACON is an author, radio commentator, public speaker, U-M lecturer, and Michigan alumnus. His books include LET THEM LEAD: Unexpected Lessons in Leadership from America's Worst High School Hockey Team; Endzone: The Rise, Fall, and Return of Michigan Football; Fourth and Long; and Bo's Lasting Lessons, co-authored with the late Coach Schembechler. He can be heard weekly on Michigan Radio and at johnubacon.com.
Social
Share on: Share on Twitter Share on Facebook