Steve Fetter, ’74/JD ’79, was working in the financial district of Manhattan on 9/11. What he saw that day transformed his life. Ten years later, he is performing a one-man show, which he also wrote, about his experiences, and honoring the firefighters who lost their lives in the Towers. 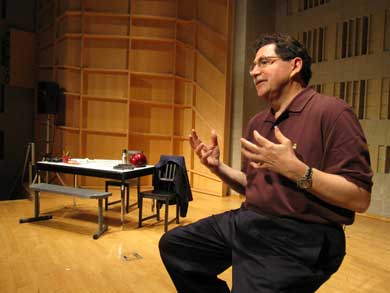 Steve Fetter onstage in his play about 9/11, ‘A Blue Sky Unlike Any Other.’ (Photo courtesy Steve Fetter.)

The following piece contains a pair of excerpts from the play, “A Blue Sky Unlike Any Other.” It is running at the Baruch Performing Arts Center through Sept. 25.

Bonnie was calling to ask if I had seen it.

“A plane has hit the World Trade Center.”

Had my wife not called, I undoubtedly would have been horrified to see the second plane as it appeared outside my window and flew by my building. Instead, a moment after hanging up the phone, I heard the explosion. It wasn’t more than a few seconds before the mailroom guys, the most laid back people in the building, came running through the corridors, ordering us to get out of the building—and when I paused a moment to get my bagel and water, they yelled at me—”Now!” I ran to the elevator lobby where I encountered several colleagues who had been at the windows looking at the burning North Tower when the second plane had hit the South Tower. They had witnessed the horror live.

Out on the street, we joined thousands of milling workers. With my bagel and bottle of water stuffed into my pockets, I walked around the corner to Battery Park, where I saw my first surreal scene of the many I would see that day. Almost everyone was looking into the sky toward the North, with horror etched into their faces. But a few fools, I’m embarrassed to say, were smiling and laughing, oblivious to it all, treating it like some kind of glorified false alarm.

I know I wanted to get away from them, but still, even today, 10 years later, I can’t explain why I did what I did next. I started walking my exercise route, toward the World Trade Center, when most everyone else was running the other way.

Oh I have my theories, none of which seems very reasonable. Maybe I was trying to find my younger brother who worked across the street from the Twin Towers in the World Financial Center, calling his cellphone as I walked, with no cell service to be had? Or maybe it was just my tendency to follow firetrucks to see where the action was—years before I had tried to become a volunteer fireman and had gone to talk to the Glen Echo Fire Chief in suburban D.C., but he had dashed my hopes because I didn’t have 20-40 uncorrected vision, or as he said, “Like it matters—you can’t see a damn thing once you run into the smoke.” Or maybe it was just the last gasp of the Prozac, doing both the thinking and the walking for me.

Whatever the reason, I turned up West Street, waiting for police crowd control to stop me, but they never did.

I kept walking until the horror stopped me a half block from the World Trade Center. There were body parts strewn across the intersection and a burning jet engine just ahead, beside the Marriott Hotel. A guy in a baseball cap next to me turned from his portable radio and said, “The Pentagon’s just been hit.”

We both just stared in silence at the carnage before us, calling out only to warn a National Guardsman in a jeep that he was hitting body parts as he drove through the intersection, but he couldn’t hear us.

I think everyone watching the Towers burning believed that maybe the tops of the buildings might keel over and fall to the street below, but I don’t think anyone could imagine what came next. The top floors of the South Tower, the second building to be hit, began to twist almost imperceptibly and I heard a subtle creaking that slowly worked toward a roar, not unlike when a subway train comes from far down the tunnel and goes barreling through a station without stopping. I felt the vibration, I could hear the noise growing—and, suddenly, I knew I must run.

For the first time since my horse accident, I had to run. I thank God everyday that my legs, my bad leg with the metal plate and so many screws worked for me, held together, because as I ran, small pebbles started hitting me in the back. I wouldn’t know until the next day that each pebble had left a bruise on my back. I got to Rector Place and turned right around the corner, leaning against the stone facade, breathing heavily but glad that I would be safe. And then I saw one block over to the West a mass of soot, and dust, and ash roar through the intersection like a runaway freight train. And a split second later, the grey cloud swept over me. Stunned, I yelled at myself, “You’ve really done it now!”

Everyone asks me what went through my mind at that moment. I can tell you like it was yesterday. First I thought of the Caribbean island of Montserrat where volcanic ash covered villagers who then just stopped breathing and died. I expected the same thing to immediately happen to me. When it didn’t, I next thought of my mother, lying in a coma across the river, and that I would predecease her. Next thoughts were of my kids, that I would never see them again and that my wife would be raising them alone. At that moment, I determined that I was going to fight to live and that, if necessary, I would go the few blocks to the Hudson River and jump in.

[Fetter survived the day by taking shelter in a nearby basement. But living through it brought unexpected changes.]

The fall of 2001 continued to be dark for me. My mother never came out of her coma and passed away on September 26. In retrospect, I believe she was better off never having to experience this post-9/11 world in which we live. After my office reopened, the dust and the smells would dissipate a little each day. Then the shocking bankruptcy of Enron on Dec. 2, 2001, shook up the financial markets anew. And I thought about Tom, the guy at Enron. A couple of days later, he emailed to tell me that he had left Enron, and he asked whether I would be willing to pass his résumé onto others. Of course I would, and I did, but the truly eerie moment came when I opened the attachment containing his résumé.

I saw before me the career that very well might have been my own: the progression from a relatively entry level regulatory affairs job, up the ladder, with multiple promotions, to a high-level management role that took Tom all the way to meetings at the White House—and then Enron collapsed.

Robert Frost or no, how many of us ever get the opportunity to witness the road not taken with such clarity? With all that had occurred, by the turn of the new year I knew that it was time for change. I accepted a seat on a utility board of directors and left Wall Street on April 1, 2002. I stopped taking Prozac that morning.

I left New Jersey taxation behind and relocated to the West. But to be honest, I’ve never stopped seeing myself as a New Yorker. Though I live just about as far away from Brooklyn as one can and still be on the mainland United States, I miss the city and I’m totally comfortable when I’m there. Small town life works for me because at least a dozen times a year I’m back in New York City for business or pleasure. I go to more theater now than I ever did when I lived an hour away.

But maybe once or twice a year, no more than that, I’ll look up, there won’t be a cloud in the sky, the blue will look painted on—and I’ll say to myself, it’s a September 11 day. And no matter how hard I try to shake it, all of these memories come rushing back—the heroism, the honor, the sacrifice, and, for me, a profound feeling of sadness and loss.