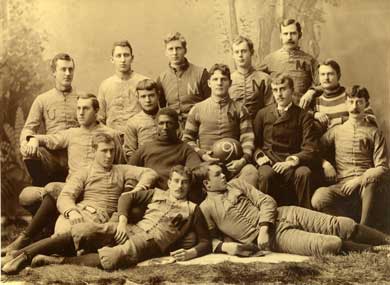 George Jewett with his teammates from the 1890 Michigan Wolverines football team. (The ball was apparently the property of a player from the class of ’91.) Click image for larger version. (Image courtesy U-M Bentley Historical Library.)

George Jewett II was, by all accounts, everything one would expect a Michigan Man to be. Smart, accomplished and well-liked, he’d captained the football, baseball and debate teams at Ann Arbor High School, was valedictorian of his class and spoke four languages—German, Italian, French and English. The son of a successful Ann Arbor blacksmith, he enrolled at the University of Michigan in 1890 with plans to become a doctor.

But first he became a pioneer. Jewett—born just five years after the end of the Civil War—was the first African American football player at the University of Michigan, where his speed, toughness and gift for finding his way through mayhem made him a star in the new and somewhat renegade sport.

“I remember George very distinctly…” wrote U-M alum Ralph Stone in a letter many years later. “I was on the Michigan squad with him in the fall of 1890. George was a ‘star’ in his own right. Without benefit of blockers he could dodge, wriggle, twist, pivot and whirl through the opposing team as well as the modern No.1 All-American back could do with the help of a mighty bulk of human flesh to block for him.”

Michigan wouldn’t have another African American player until Willis Ward in 1932.”When (Fielding) Yost came along (1901) he put everything under glass,” said Ann Arbor native Coleman Jewett, George Jewett II’s grandson. “Yost wouldn’t let black athletes play football, even though there were some great ballplayers.” 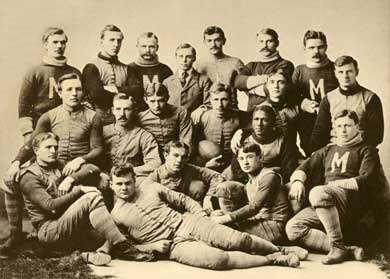 Jewett, pictured here with the 1892 team, stood out both athletically and for his appearance, making him a target for racial abuse. Click image for larger version. (Image courtesy U-M Bentley Historical Library.)

The extent of George Jewett’s football accomplishments would remain buried until 1952 when they were revisited in a local news story. Coleman Jewett was a high school junior then; he’d grown up in Ann Arbor with no idea of his grandfather’s accomplishments.

“It was late in my football career—really late—that I found out about all of this,” said Coleman, who carried on the family tradition of academic and athletic excellence at Ann Arbor High two generations later. “I would probably have tried harder had I known.”

In George Jewett’s day, football was a brutal game with a dubious reputation.The forward pass had yet to be “invented,” so strategy revolved around brute force and punishing group attacks like the “flying wedge.” Without the benefit of pads or helmets, defensive players attacked the V-shaped wedge formation at their own peril. People occasionally died from injuries suffered in massive on-field collisions and pileups, and the call went up in more than one state to make the sport illegal.

An 1897 article in The Washington Star called football “A Game of Manslaughter”: “The football season is only fairly begun, and yet at least three deaths have already occurred as the direct results of this brutally played game. It is to be expected that before the close of the season other young men will have sacrificed their lives on the gridiron in the foolish following of a ‘sport’ that is based upon principles of pugilism rather than athletics. Meanwhile arms are being broken daily, legs are wrenched, faces are disfigured, scalps are torn and a thousand and one other accidents of a more or less distressing nature are occurring in the mad rushes of eleven against eleven.”

Teams had three downs to gain five yards, and kicking and slugging were common tactics, as was starting an argument to distract the referee while a teammate tried to move the handkerchief that marked the down.

“I think it was just the newness of the game (that was attractive to Jewett),” Coleman Jewett said. “And of course he would have wanted to prove he was the better man.”

Michigan’s teams practiced on a sandy, rock-strewn lot at what was then the edge of campus and is now home to the Chemistry building. Until the University purchased its first athletic field during the 1890 season, U-M played its games at the old County Fairgrounds, which later became Burns Park.Players supplied their own outfits and those who played on the U-M squad (as opposed to one of the many intramural teams) penciled the block M onto their canvas jackets. Jewett, who stood out both visually and athletically, became a target for abuse from racist fans. 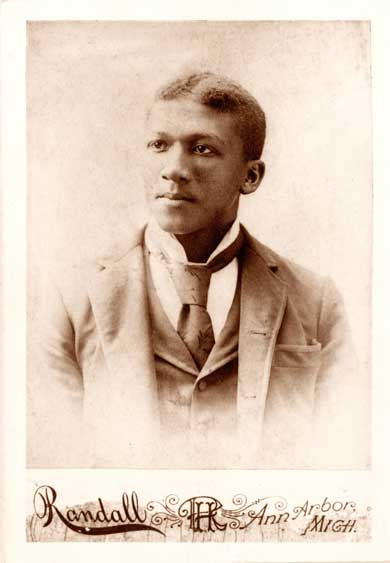 Jewett in 1895. After a transfer to Northwestern, he earned his medical degree, but after just a brief stint practicing medicine, he returned to Ann Arbor and opened a cleaning and pressing shop. (Image courtesy U-M Bentley Historical Library.)

In a 1955 letter to a friend, former Michigan end Roger Sherman recalled two specific incidents from Jewett’s playing days. One involved a hotel clerk in Indianapolis who refused let Jewett check in with the team on a trip. (He was ultimately allowed to stay after his teammates and some local alumni stepped in.) Another, Sherman said, happened during a game at Albion College.

“His presence was resented by both the Albion team and the spectators. Every effort was made to get him ruled off, and traps were set for him to bring this about. On one occasion he was charged with ‘slugging’ and the cry went up from the crowd to ‘Kill the nigger.’ The crowd surged out onto the field, blows were struck and a riot was in the making when the local police intervened and the game went on with Jewett still in the lineup.”

And though Sherman described Jewett as “modest and retiring,” a 1952 Ann Arbor News story recounting Jewett’s career suggests he also had a grittier side: “All accounts agreed that Jewett could not only take the grueling punishment of oldtime football, but he could dish it out, too. He could stand just so much kinetic unkindness—but no more. Such situations he handled without subtlety or secrecy. More than once, in plain view of players and crowd, he would knuckle the nearest nose to a neat knob and then march, with dignity, to the sidelines under the referee’s chaperonage.”

Jewett didn’t play football in 1891, but he showed up again on the 1892 Michigan team that tangled with college football legends Amos Alonzo Stagg and John Heisman.Stagg played for and coached the University of Chicago squad that Jewett and the Wolverines stung for three touchdowns in a 18-0 victory. Jewett scored two of them and set up the third by tossing a lateral to a teammate. (History credits Stagg with developing the lateral pass.)

Jewett scored three touchdowns in the first half against Heisman-coached Oberlin College, and though Heisman praised his play, neither school has ever conceded the game.The teams had agreed the game would end at 5 p.m., and Oberlin—leading 24-22 near the end of the game—claimed time was up. Michigan argued that there were still 10 minutes left.

While Heisman argued with the referee, Jewett quietly picked up the ball and walked into the end zone for a touchdown. The referee ruled in Michigan’s favor, but both schools still count the game as a victory.

A disagreement with medical school dean Victor Vaughan prompted Jewett to transfer to Northwestern University, where he finished his medical degree. He played football for Northwestern in 1893 and ’94, becoming the first African American player in that school’s history as well.He practiced medicine briefly in Chicago, but returned to Ann Arbor in 1899, eventually seizing an opportunity in what was then the brand new field of cleaning and pressing.

Dashing in his derby hats and spats, and able to talk with his immigrant customers in their native tongues, Jewett built a successful business. His State Street shop, “The Valet,” delivered clean, pressed clothes by carriage behind matched teams of black and white horses.

“Medicine wasn’t as lucrative as it is today,” said Coleman Jewett. “In those days people didn’t clean and press their own clothing, so cleaning and pressing were the big thing of day, and he did quite well.”George Jewett married Lillian Zebbs in 1901. They had two children, George H. Jewett III (1902-77) and Richard Jewett (born 1908). Richard—Coleman’s father—was eight days old when George Jewett died of a heart attack while working in his shop at 38.