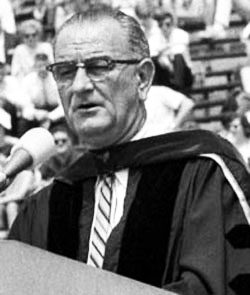 On the day John F. Kennedy was assassinated in 1963, the White House was keeping an invitation from the University of Michigan on hold. At the suggestion of a student leader, Roger Lowenstein, U-M President Harlan Hatcher had invited Kennedy to address Michigan’s graduates at spring commencement in 1964. Hatcher waited a month, then reissued the invitation, this time to the new president, Lyndon Baines Johnson. 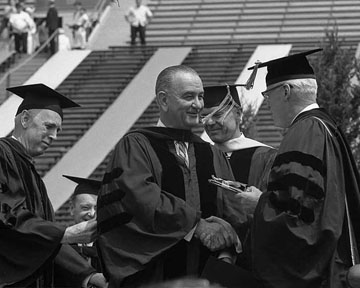 Weeks went by with no definite answer. Then, with some urging from Michigan’s junior U.S. senator, Phil Hart, Johnson said yes. If the ceremony could be moved up a day to Friday, May 22, he would speak. The University began to prepare for its first commencement address by a sitting president.

One day in April 1964, LBJ called for two top aides, Bill Moyers and the speechwriter Richard Goodwin, to join him for a skinny dip in the White House pool. He wanted to talk about something important. LBJ had been pushing Kennedy’s unfinished business through Congress—civil rights legislation, Medicare, a tax cut. Now, looking toward election in his own right in the fall, he told his aides he wanted ideas for “a Johnson program, and don’t worry about whether it’s too radical or if Congress is ready for it. That’s my job … Hell, we’ve barely begun to solve our problems.”

He wanted a big speech to kick off his election campaign, and he planned to deliver it at Michigan Stadium. As he recalled in his memoir, Remembering America, Richard Goodwin (who later would marry the historian Doris Kearns, a Johnson protégé) started looking for “a concept, an assertion of purpose,” to capture the bigness of Johnson’s vision. He picked up on a phrase LBJ had used in speeches once or twice already. The phrase was “Great Society,” a variation on “The Good Society,” the title of a classic defense of liberalism by the commentator Walter Lippmann.

Read or listen to LBJ’s speech.

Drafting the speech, Goodwin groped to express an ideal beyond the lunch-bucket liberalism of the New Deal. He was trying, he recalled, to capture the idea “that private income, a decent standard of living, was only a foundation; that private affluence, no matter how widely distributed … could not prevent the deterioration of urban life … could not restore our contact with the natural beauty that had been stripped from our urban areas … could not assure us that the intelligence and talents of our children would be skillfully cultivated.”

With suggestions from other aides and revisions by Moyers, it was essentially Goodwin’s draft that LBJ carried to Ann Arbor. 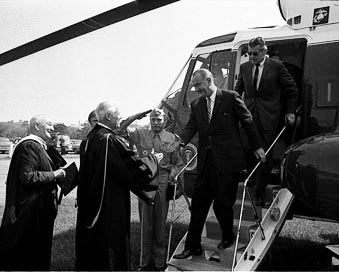 Attendance at commencement had been spotty in recent years. But under a clear sky on May 22, 1964, football-Saturday-sized lines streamed into Michigan Stadium. The Secret Service wanted no one sitting behind the rostrum, so sections at the north end were blocked off. Even so, the Michigan State Police estimated attendance at 70,000. University officials claimed it was closer to 85,000.

Then, a few minutes before 10 a.m., four identical helicopters landed just east of the stadium. From one of them LBJ emerged—the first hand he shook belonged to Gov. George Romney, father of the presumptive 2012 Republican presidential nominee, before he was hustled into the stadium tunnel. In the visitors’ locker room he dressed in academic robes. Finally, he strode into view as the Michigan Marching Band blared “Hail to the Chief.”

At 10:56 a.m., after the presentation of degrees (including his own honorary doctorate of civil law), Johnson stood to deliver Richard Goodwin’s words. “In your time,” Johnson told the graduates, “we have the opportunity to move not only toward the rich society and the powerful society, but upward to the great society.” In such a nation, he said, “abundance and liberty for all [and] an end to racial injustice and poverty” would be “just the beginning” of an age devoted to larger pursuits of the human spirit. It would be “a place where each child can find knowledge to enrich his mind and to enlarge his talents … where leisure is a welcome chance to build and reflect, not a feared cause of boredom and restlessness … a place where the city of man serves not only the needs of the body and the demands of commerce but the desire for beauty and the hunger for community … a place where man can renew contact with nature … a place where men are more concerned with the quality of their goals than the quantity of their goods.”

To begin this quest, he said, his administration would pursue concrete goals in three areas—urban renewal, environmental protection, and massive aid to education. (He gave no details; Richard Goodwin held to Theodore Roosevelt’s advice that a political speech should be “a poster, not an etching.”)

Along with the drive for civil rights, the “war on poverty,” and Medicare, these would be the pillars of Johnson’s massive domestic program—and the source of the liberal-conservative divide down to our own time. 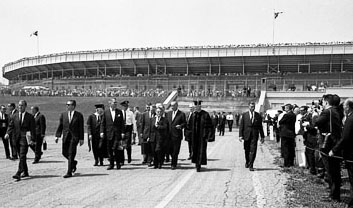 By all accounts Johnson was pleased with the reception he received from Michigan students. (Image courtesy of U-M Bentley Historical Library.)

The speech lasted just 20 minutes. Johnson, though renowned as a one-on-one persuader, was no great orator in front of a crowd. He could never match the offhand charisma of his predecessor, who had electrified a late-night mob of Michigan students when he called for an international Peace Corps during the 1960 campaign. Still, the Ann Arbor crowd stopped LBJ with applause 29 times, and on the return flight to Washington that afternoon, he was “just … absolutely euphoric” over the response, a reporter recalled. For the moment, at least, he believed “he was fully in command of the nation’s support.”

In his column the next day, James Reston of The New York Times noted that in the six months since Kennedy’s death, LBJ had displayed remarkable political skills; but “the basic question is: What is the end and purpose of all this remarkable political skill?” In the speech at Ann Arbor, Reston said, LBJ had shaped an answer.In November, Americans rewarded him with a landslide victory over the Republican nominee, Sen. Barry Goldwater.

How many U.S. presidents have visited U-M? See the answer here.

According to the historian Robert Dallek, author of a two-volume biography of LBJ, it was not that Americans were craving the specific programs that would make up the agenda of LBJ’s Great Society. It was a more emotional reaction. Johnson’s “positive outlook on the nation’s future,” Dallek wrote, “was a welcome antidote to the grief and dejection so many Americans continued to feel over Kennedy’s assassination.

“In short, Johnson’s enthusiasm and confidence that the country could reach unprecedented heights made Americans feel better about themselves,” Dallek continued. “Never mind that he was overstating and overselling his vision of where he hoped the country would go. It was enough that he forecast a better day when pride in the nation’s accomplishments would replace recrimination and doubt about a violent America doomed to national decline.”

Did you encounter Johnson or any other U.S. president during your time at Michigan?