A Canterbury Tale — or The Gospel According to Joni Mitchell, Neil Young, and Commander Cody 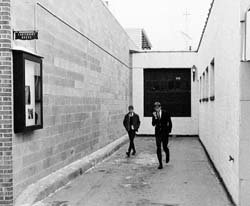 Everyone knew the alley that led to the Canterbury House. (Image courtesy of U-M Bentley Historical Library.)

No, not there, you idiot . . .this one, here on Maynard Street across from the Arcade.

Walk down. The door to the right…

In the 1960s the title of hippest town in the Midwest most certainly belonged to Ann Arbor, Mich., birthplace of Students for a Democratic Society, the Hash Bash, and Iggy Pop and the Psychedelic Stooges. In those days Ann Arbor was home to a vibrant music scene, and of the many hip clubs scattered about the city, among the very hippest was a small converted print shop less than a block from the University of Michigan campus, hidden behind a plain black door at the end of an alley across from Nickels Arcade. The sign on the wall read Canterbury House.

“There was a great vibe there,” recalls Andy Stein, former multi-instrumentalist for cult-favorite Commander Cody and His Lost Planet Airmen. The Cody band got their start in the late ’60s playing at Canterbury and other venues around Ann Arbor. “I loved the place. It was a real center of hipness in the ’60s, in a very calm and peaceful way.”

A lot of other people loved it, too. “It was a rare night that we weren’t full,” recalls Ed Reynolds, student manager of Canterbury House from 1965-68. On show nights the lines often stretched around the block. Those who couldn’t get in listened at the open windows, mesmerized by the nascent genius of fledgling folkies Neil Young and Joni Mitchell, or grooving to the virtuoso riffs of blues masters Buddy Guy and Luther Allison.

Canterbury was more than just a music club, however. It was also a coffee house, soup kitchen, and counseling center, as well as a popular place for university students to spend the afternoons and evenings hanging out. You could take in a Bogart flick, watch a play about the Vietnam war, or listen to a debate on the use of marijuana and LSD. Then, on Sunday mornings, you could hear the liturgy and take Holy Communion, as Canterbury House was run by the Episcopal Student Foundation and was home to a thriving campus ministry.

“Canterbury was totally in keeping with the moment, with the times,” says Craig Hammond, a chaplain there from 1967-70. “It was a cultural, spiritual, and political force in a community that had come alive. It was exciting, it was dynamic, and never the same from one day to the next.”

Canterbury House was established in the mid-1940s as the Episcopal Student Center for the University of Michigan. Throughout the ’50s it served mainly as a quiet retreat for the campus religious community. But things began to change in the ’60s, especially following the arrival of Reverends Dan Burke and Martin Bell, a unique pair of jocular free spirits with unconventional notions about the ministry.

“They were probably the two coolest people I knew,” says Ed Reynolds.

Burke and Bell hatched the idea of turning Canterbury into a coffee house with folk music after hearing about similar ventures on the East Coast. Their superiors took a bit of persuading, but finally in 1965 the old Dobson family home at 218 North Division was converted into a beatnik café, open during the week for coffee and conversation, with music and “free eats”—usually sandwiches and cider—on Friday and Saturday nights. The program proved so successful that the next year it was decided to move to a more spacious location, closer to campus, and start bringing in bigger, national acts.

Let’s put on a show

In the summer of ’66 an old print shop at 330 Maynard Street was rented, refurbished, and turned into a state-of-the-art concert hall with a capacity of a little more than 200. Burke and Bell went to visit some contacts in the music business in New York and soon had a string of top-drawer talent lined up for the fall season. It was that simple.

“I think we hit at the exact right moment,” says Judy Calhoun, a student volunteer at Canterbury who now serves on the board of the Ark. 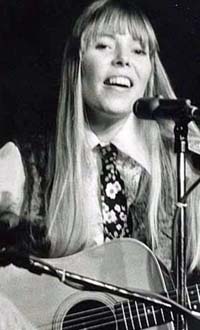 Joni Mitchell was a popular attraction. (Photo by Al Blixt.)

As the club’s reputation grew so did the caliber of its performers. The truly big acts like Bob Dylan and Phil Ochs would play at Ann Arbor High School or Hill Auditorium. But for those who preferred a more intimate setting with an audience that was serious about the music, Canterbury was the venue of choice. Gracing the Maynard Street stage during its heyday from ’66-’71 were such respected names as Len Chandler, Jesse Fuller, Dave Van Ronk, Guy Carawan, Odetta, Richie Havens, Doc Boggs, Jim Kweskin, Mike Seeger and the New Lost City Ramblers, Buddy Guy, Ramblin’ Jack Ellliot, Doc Watson, Skip James, and Sun Ra, as well as promising up-and-comers like Tim Buckley, Neil Young, Joni Mitchell, Gordon Lightfoot, and Janis Ian.

Stories of the performers and shows at Canterbury abound. Dan Burke tells of how Neil Young had a particularly bad case of opening-night jitters before his ’68 appearance.

“When we went to his room we found him sitting on the bed with his knees drawn up close to his chest, a washcloth over his head, and he was just nervous as a cat,”Burke says.

There were real fears that the show would have to be canceled. But Burke and others managed to calm the singer and persuade him to go on. It turned out to be one of Young’s most appealing performances, as listeners of the recent CD release Sugar Mountain: Live at Canterbury House, 1968 can attest.

“As is the case with so many performers,” explains Burke, “when they’re introduced and come out on the stage, they become a new person.”

Joni Mitchell was another who left potent memories of her brief visits to Ann Arbor in ’67 and ’68. Bob Franke recalls getting a hug from Mitchell because of a glowing review of her music he had written for The Michigan Daily. Alan Neff, a student volunteer at Canterbury, remembers giving her a bottle of wine and a poem.

“I was smitten,” he says, “and probably trying to work up to making a pass. It was hard to be anything but awed by her. I gave her the wine and the poem, and she gave me a big smile, and I just ran out of the room.”

Dan Burke tells of going out to eat with Joni after a show: “We were sitting in the restaurant, and someone came up and asked her why she used so much alliteration in her lyrics. She said, ‘When you’re born in Saskatoon, Saskatchewan, it sort of comes naturally.’ Everybody laughed and laughed and I still remember it, more than 40 years later.” 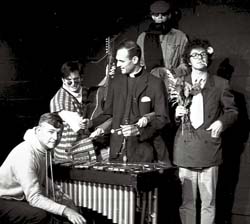 The Canterbury crew knew they hit on something at the right time. (Photo by Al Blixt.)

But there was more of the ’60s spirit at Canterbury than just the music. The pastors were active in the anti-war movement and were at least sympathetic with the counterculture—although a few went further. Craig Hammond stepped easily into the role of Ann Arbor’s hippie priest, a “freaky-looking, frazzle-haired Episcopal chaplain” (wrote the Detroit Free Press) who “spreads the Gospel dressed in steel-rimmed glasses, gray vest, light blue-striped shirt, wide velvet fuchsia tie, dark blue pin-striped slacks, and baby blue tennis shoes.”

Such an unorthodox approach to the ministry probably wouldn’t fly today, but for the time and place it was exactly right. The Sunday morning services at Canterbury happened in the same room as the Saturday night concerts, and were almost as popular.

“The atmosphere at Canterbury House was very permissive, but at the heart there was also a deep and committed spirituality,” says Gayle Rubin, then a leading figure in the local women’s movement. “I liked the pastors as people; very nice, smart individuals who were very engaged with their community. I even attended some of the Sunday services, although I was Jewish and not particularly fond of Christianity. But those services were sufficiently warm, welcoming, and ecumenical that I felt comfortable enough to go.”

“We accepted people for who they were,” explains Craig Hammond. “We never initiated discussion about their faith, or their faithlessness, or whatever. That was an important part of our success.”

Like all good things, however, the glory days of Canterbury House were destined to end. Although Canterbury continues to live on as the University of Michigan Episcopal student center, the coffee house closed its doors in 1971, a victim of changing times and financial pressure.

“In the beginning we had ham-and-cheese sandwiches and hot or cold cider,” recalls Judy Calhoun with a nostalgic smile. “At the end it was Tootsie Rolls on a paper plate, and Kool-Aid.”

But for many who were involved the experience remains an indelible part of their lives.

“It was an absolute wild ride,” says Ed Reynolds, who in addition to managing the coffee house was also a regular performer. “It was beyond fun. It was a very intense way to live, and a good thing it didn’t go on forever, because I couldn’t have stood it.”