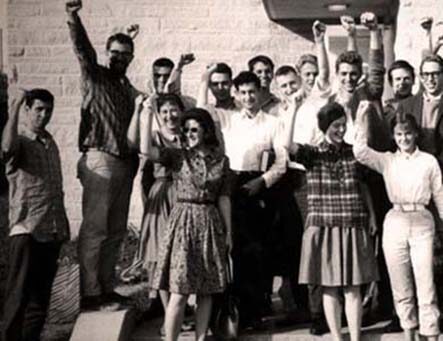 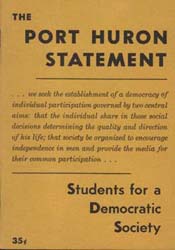 Original copies of the Port Huron Statement sold for 35 cents.

“We are people of this generation, bred in at least modest comfort, housed now in universities, looking uncomfortably to the world we inherit.”

So begins the legendary Port Huron Statement (PHS), the 75-page manifesto published June 15, 1962, that would come to define the historic student movement of the 1960s.

“The search for truly democratic alternatives to the present, and a commitment to social experimentation with them, is a worthy and fulfilling human enterprise, one which moves us and, we hope, others today,” the document states. “On such a basis do we offer our convictions and analysis: as an effort in understanding and changing the conditions of humanity in the late 20th century, an effort rooted in the ancient, still unfulfilled conception of man attaining determining influence over his circumstances of life.”

“It must have been something in the air, something blowing in the wind,” principal author and former Michigan Daily editor-in-chief Tom Hayden, ’61, has said of the document’s genesis. “And we wanted to write an agenda for our generation.”

“They” were the Students for a Democratic Society (SDS), an idealistic group of activists at the University of Michigan. With publication of the PHS they would spawn a national movement heralding the New Left. Some 60,000 copies of the document were printed and sold between 1962-66; millions would look to its persuasive and powerful content as a template to focus and channel their collective discontent.

In 1962 the state of Michigan was surfing the crest of the great post-World War II economic tidal wave. Detroit owned 92.2 percent of the domestic car market. Gas was 31 cents a gallon, a McDonald’s burger cost 15 cents, and most calls were made via landline by way of clunky rotary telephones.

That March, when University of Minnesota dropout Bob Dylan released his debut album, America had enough nuclear weapons to decimate the earth five times over. School children were trained to duck and cover with the illusion they could survive atomic annihilation. Few Americans had yet to hear of Vietnam, and no one could have envisioned that vital and charismatic President John F. Kennedy had just 20 months to live.

In many Southern U.S. towns, African Americans couldn’t even register to vote. With a voting age of 21, many college students couldn’t, either. In fact, students actually were legal wards of the college they attended (in loco parentis), answering to dorm counselors who enforced strict curfews and rules like “two couples, three legs on the floor, please.”

The times, they needed changing. And campuses, stated the PHS, needed reform: “The university is the only mainstream institution that is open to participation by individuals of nearly any viewpoint.”

In the 50 years since its initial publication, Hayden has attracted the bulk of media attention surrounding the Port Huron Statement. He wrote much of the original text and served as its high-profile articulator and leader of its execution. But it’s the lesser-known Robert Alan (Al) Haber, ’65, still living in Ann Arbor, who is credited as the “big brain,” the “visionary,” and the “indispensable element” of the student movement.

See “A Decade of Dissent,” the Bentley Library’s history of student protests at the University in the 1960s.

As the founder of SDS, Haber was elected its first president in 1960. He spent the first few years building the organizational and intellectual foundation that would support Henry David Thoreau’s call of “voting with your whole body.” In the SDS, Haber had established an educational association that, in his words, was “concerned with building a responsible and articulate left in universities and to extending the influence of this community into the political life of society more generally.” After one of the organization’s first meetings he wrote, “Pessimism and cynicism have given way to direct action.”Hayden, meanwhile, was quickly evolving from student editor into student activist. He gravitated toward Haber, a “bald, smooth-skinned, bespectacled man of average height, trim in build,” who lived in a garret behind the Daily office. As their collaboration gained momentum, the response to the changing times itself began to change.

Haber’s late father, William, was an economics professor at Michigan who helped author Social Security legislation. He ascended to dean of the College of Literature, Science, and the Arts in 1965. “I happen to be living on a college campus, an exciting and vital group of 25,000,” he told a reporter at the time. “They are students coming out of their shells; they are talking about ideas and ideals. They are thinking beyond the vocational purposes which brought them to a college or university campus.” 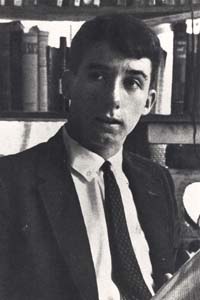 Much of the PHS was informed by Hayden’s experience inside the Civil Rights movement. He’d joined the Freedom Riders and participated in the fight to register disenfranchised African American voters. After being beaten and jailed, he dedicated himself to composing a call to action targeting the nation’s youth, relaying what he saw and felt and, most importantly, how to make it better. He took inspiration from Yale sociologist C. Wright Mills and Thoreau, mixed in some Jack Kerouac and James Dean, and drafted a 50-page document that described his alternative to a life of “apathetic absurdity.”

Haber, Hayden, and a handful of SDS members organized a conference to discuss Hayden’s working treatise. The resulting work would take its name from this June 1962 event, based at a United Auto Workers Retreat on Lake Huron. In the course of five days, more than 60 student activists from New York to California hunkered down in rustic, beachfront cabins at Port Huron’s FDR Camp (now known as Lakeport State Park) to hash out, then publish the consensus document that would change the course of American social and political history.

The group structured plenary meetings around the “bones” of the document, which each got an hour’s debate. Relatively important issues became “widgets” and were given a half-hour; minor issues or “gizmos” got five minutes. Then, according to Hayden, people broke out into small democratic groups “to sit around tables, or under trees, drinking coffee, taking notes, arguing animatedly.” Ultimately the group presented the content in eight sections: values; the role of students; American politics; the economic system; racism; communism; foreign policy; and the nuclear issue.” 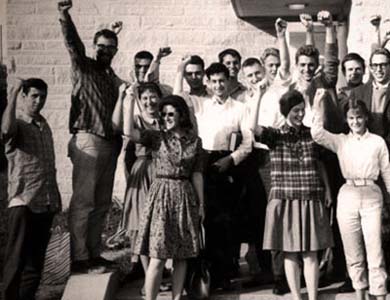 Tom Hayden (far left) and members of the SDS at a national council meeting. (Photo by C. Clark Kissinger.)

The Marxists in attendance left the table wanting a lot more. Utopians, wanting everything, ended up with nothing. But Hayden has since pointed out the greater goal was to reach “consensus, points of agreement, ideas that could lead to joint action.”After some long, sometimes acrimonious days and nights, the PHS emerged as a blueprint for students concerned not only with transforming their universities but also reforming voting rights, ending racial discrimination, stopping the nuclear arms race, and reorienting the economy to form a more enlightened egalitarian society reflecting Kaufman’s participatory democracy. Richard Schrader, an attorney with the National Resources Defense Council, says the PHS “redefined the context of American left-of-center-politics from a general attachment to bland corporatist liberalism to a new sense of grassroots activism.”

Upon leaving Port Huron, Hayden and Haber drove to Washington, D.C. At the White House, they met with resident historian Arthur Schlesinger Jr. (A Thousand Days) and gave him a copy of the PHS. Schlesinger said he would share the SDS’ views with President Kennedy. But it was JFK’s successor, Lyndon Baines Johnson, who would be most impacted by the document. Richard Goodwin, former aide to both LBJ and JFK, has said the PHS inspired LBJ’s Great Society.

In his seminal book SDS, historian Kirkpatrick Sale concludes, “The Port Huron Statement so thoroughly plumbed and analyzed the conditions of mid-century American society, and so successfully captured and shaped the spirit of the new student mood, that it became not only a statement of principles for the few hundred students around SDS, not only a political expression for the hundreds who were to come into the organization in succeeding years, but even more a summary of beliefs for much of the student generation as a whole, then and for years to come.”

SDS helped to pass the landmark Voting Rights Act of 1965, though the voting age wouldn’t be lowered to 18 until 1971. The group expanded to hundreds of chapters nationwide, leading the opposition to the Vietnam War before splintering into factions, effectively ending in March 1970 when members of the violent disavowed Weathermen blew themselves up while building a bomb in New York City’s Greenwich Village.

Hayden went on to marry (and divorce) actress Jane Fonda, serve in the California state legislature for two decades, teach college, and author nine books, including his memoir, Reunion. He lives in Los Angeles and runs the Peace and Justice Resource Center.

Haber resides in Ann Arbor, working as a craftsman creating custom wood cabinetry and furniture, seeking clerical help with his own memoir and participating in Occupy Ann Arbor. He thinks today’s Occupy participants, much like the SDS at the time of PHS, now have enough field experience and realpolitik maturity to craft what he calls “A Manifesto for Now.” He should know. His experience in such matters is unsurpassed.

Tom Hayden and Al Haber will be back on campus this fall, along with Dick Flacks and Bob Ross, at an open interdepartmental conference run by history professor Howard Brick. “The Port Huron Statement and the Making of the New Left” is scheduled for Oct. 31-Nov. 2, 2012.

FREDRIC ALAN MAXWELL, '79, writes most of his pieces in what he calls the "quiet, reverent, oak-paneled Sterling Writers Room of Portland's fine Central Library," named in honor of the late decades-long newspaper editor Donald Sterling, Michigan class of 1908. He may be reached at fredricalanmaxwell@gmail.com.
Social
Share on: Share on Twitter Share on Facebook