You get into your car outside Ann Arbor, where farm fields still sprawl in many directions, and drive east for an hour—deep into Detroit—to visit a farm. The irony hits you somewhere around the I-94/I-75 interchange. 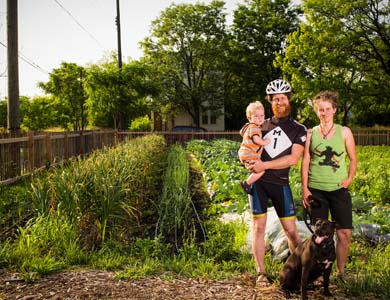 Jack Van Dyke and Carolyn Leadley are redefining the term

“I forget that this is weird,” says urban farmer Carolyn Leadley, sitting down in the shade of a mulberry tree next to her large market garden on Detroit’s east side. The neighborhood counts about as many vacant lots as houses. By June the untended grass stands shoulder high, and ringneck pheasants call from its depths. Leadley’s Rising Pheasant Farm is just a mile-and-a-half from Detroit’s Eastern Market, where she sells her homegrown organic produce and flowers.

Urban agriculture isn’t a new idea in Detroit; there are those who think the city’s vacant land could be the key to its salvation, citing farm jobs, reduced municipal burden, and increased tax revenue. But Leadley, a Michigan graduate with a degree in environmental science, wasn’t sure she believed the hype.

“With so many people it’s all very theoretical and philosophical,” she says. “I wanted to find out, ‘Can we really do this as a business?'”

Leadley learned her way around the Detroit urban agriculture scene while working on the nationally recognized school farm at Detroit’s Catherine Ferguson Academy. In 2011 she and her husband, U-M urban planning graduate Jack Van Dyke, bought the farm, so to speak.

They purchased a house and vacant lot in the Farnsworth neighborhood and adopted a couple of adjoining city-owned lots. With a base of wholesale customers and a commitment to maintaining a sustainable operation, they use bikes and six-foot cargo trailers to move crops to market.

“I feel like the best thing we’re doing is keeping it small and manageable so we can do it by bike,” Van Dyke says. “I grew up in a cycling family, so it seemed like a natural fit. And if you know how the rest of the world works, getting goods to market by bike is pretty common.” 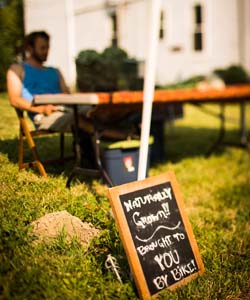 Bicycle is the family’s primary mode of transportation. (Image by Dave Lewinski.)

Leadley runs the farm while Van Dyke manages programs at The Hub of Detroit, a youth bicycle restoration nonprofit in the Cass corridor. They alternate working hours to take care of their two-year-old son, Finn, and pour whatever time and energy are left into renovating their house.

They feel they’re getting a head start on a post-peak oil lifestyle, living sustainably in a neighborhood where a barter economy and DIY ethic thrive. The farm grossed $34,000 last year running as a part-time operation, and they’re able to set aside a percentage of their net profits to reinvest and still pay Carolyn a salary.

So the short, simple answer is yes, it can be done. But experience has taught Leadley that nothing about this is short or simple. 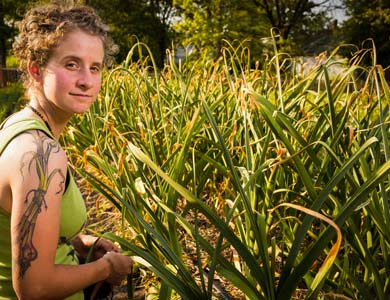 “As far as the urban ag scene and it being the solution for Detroit, it’s a lot more complicated than that,” she says. “I think it can be part of the city as alternative community planning and a community development tool.”

The neighbors who don’t know Leadley and Van Dyke by name know them as “the farmers,” and most are happy to see plants growing in organized rows on what used to be a vacant lot littered with garbage.

“Carolyn and Jack and Finnegan are the best people in the world; they’re helping this community in a earthly and non-polluting way,” says 13-year-old Diamond Bateman, who lives across the street from the house the family is renovating. This year she convinced her mom to plant a long row of tomatoes, peppers, and broccoli in the neighborhood’s community garden.A homemade sign that reads “Do not touch! ELECTRIC!” deters those who might steal the brand new tomato cages and sell them for scrap. (The cages aren’t electrified, but the suggestion seems to be working.)

“I have no problem with the farmers,” says Lorenza Washington, a neighborhood elder known to everyone as Mr. Tutt. “I’d rather see the grass cut down and something growing on it than have it covered in weeds. Farming in my neighborhood doesn’t bother me; in fact I kind of welcome it.” 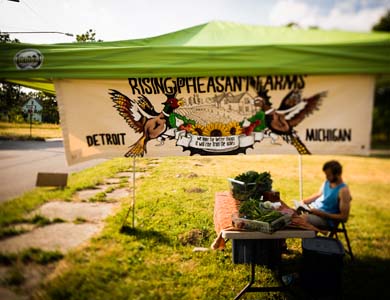 The family sells produce at their own roadside stand, as well as at Detroit’s Eastern Market. (Image by Dave Lewinski.)

Most of the couples’ neighbors appreciate that the farm gives kids a productive place to hang out, and they respect how hard Leadley and Van Dyke work to run the farm and improve the property. But not everyone likes change.

One neighbor, unhappy with the tidy wooden fence recently built from repurposed lath from the gutted house, points out that Leadley has put up a “country” fence on lots she doesn’t own. She worries that tall vegetation will block her view of her grandchildren when they walk to the corner. And though she seems to be alone in her dissent, it still gnaws at Leadley: “The thing that’s come home to us is how essential community relations are.”

Leadley has met even more of her neighbors since she started selling produce at a farm stand in front of the house once a week. It keeps her grounded in reality.

“People are talking about creating 100-acre farms. That’s huge, especially when you consider that my three little lots have encountered a certain amount of friction,” she says. “People don’t see it as a positive thing if you just come in and take over.” 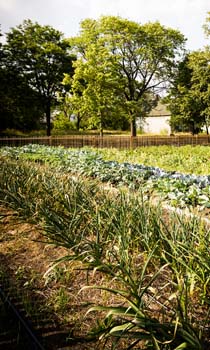 Rows of green shoots have taken the place of abandoned lots. (Image by Dave Lewinski.)

Yes, there’s a lot of vacant land in Detroit, much of it owned by the city through foreclosure. City lots are cheap—about $300. But buying them is … well, a theme is emerging here, right?

Leadley and Van Dyke bought their house for $5,500 in back taxes. They’re working with a private owner to buy one of the other lots, and have been trying for more than a year to buy the remaining parcels—including two that are currently under cultivation—from the city. Their applications passed the planning and development stage, but then someone in that city office retired, and for four months no one picked up the workload. After months of leaving messages, Leadley finally reached a human in June. Now she’s just wary of the next obstacle.

And buying property is just the beginning. Detroit’s ordinances were drafted for an entirely different kind (and size) of city, and no one considered someone might someday want to start a farm there. So the existing ordinances throw up hurdles to growing produce for sale, to making agriculture the primary use of a lot, to buying parcels that aren’t adjacent to your residence. A lot of urban farming in Detroit happens in a policy vacuum, or in violation of ordinances the city doesn’t have the resources or inclination to enforce.

“It’s not the greatest situation when you’re trying to make a living,” says Leadley. She’d like to build a greenhouse, but doesn’t want to situate that kind of investment on such shaky legal ground.

A few years back, Leadley and Van Dyke re-read Laura Ingalls Wilder’s Little House on the Prairie series and soaked in the idea of self-sufficiency on a prairies homestead of their own. But Detroit is no Walnut Grove. Here, young families in neat, simple homes live shoulder-to-shoulder with abandoned houses and economic decay.

In the middle of it all Leadley grows garlic, leeks, collards, kale, peas, and beans. Rows of tomato, potato, and pepper plants push up against the gauzy white fabric that’s been protecting them from frost. The lot she and Van Dyke own is planted in perennials—strawberries, blackberries, and flowers. 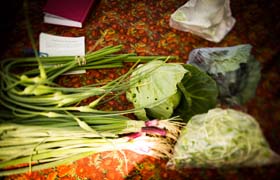 No one really bothers the garden, though last year a few people wandered in to pick tomatoes and Leadley had to explain the difference between a community garden and a market enterprise.

But the simple presence of people working on the land made a difference in the neighborhood, Leadley says. Last year a guy picked up drugs every day from the house directly across from her garden. This year he seems to have gone elsewhere.

Before they bought their property, drug dealers also were using the house. Unsure how to lay claim to it, Leadley began planning lots of workdays on the nearby farm lots, and soon the drug dealers moved on. She’s heard through the grapevine they left because of the “nosy, uppity neighbors,” and that makes her feel good.

Rising Pheasant Farms’ signature cash crop actually grows around the corner, in the attic of the nearby house Leadley and VanDyke rent while they’re renovating. Sunshoots are crunchy, protein-rich, seven-day-old sunflower plants. These high-end micro-greens find their way into salads and wraps and sell for $4 a quarter-pound. Leadley has two part-time employees who help with the farm, but she still tends the sunshoots herself, and they have to be watered twice a day. Finn and those tiny sunflowers rule her life.

When he isn’t riding around on his mother’s or father’s back, Finn explores his realm the way two-year-old boys always have—by gleefully picking up everything he sees. Nothing goes unexamined, and anything that’s vaguely hammer-shaped becomes one in his little hands. He is a totally new breed of “farm kid.”

“We don’t just have the farm to run and the house to renovate, we also have a two-year-old to raise,” Leadley says. “But we wanted to have a family that’s (doing this) together, and for him to realize that he’s a part of it. We want him to learn some real skills and see us doing some real work.”

As for the future of urban farming in Detroit, Leadley likes the idea of resident farmers and small-scale farms—operations that work in concert with the people already living there rather than in spite of them. And yes, there’s a lot of open land, but she’d rather not see every inch of it put to use.

“I personally like living in this neighborhood,” she says. “I like the prairie; I like the pheasant habitat. No one goes out to the country and says, ‘Look at all this open space; we have to put something on it.'”