Step aside Lerner & Loewe, Kander & Ebb, and all the rest. It’s time to make way for Pasek & Paul, the hottest new songwriting team to hit the Great White Way. 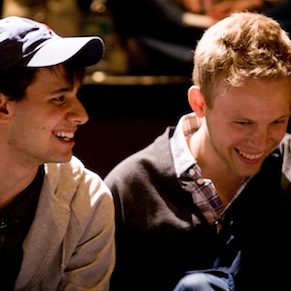 For those who knew them when they were musical theatre students at the School of Music, Theatre & Dance (SMTD), it’s no surprise that Benj Pasek and Justin Paul made it to Broadway just six years after completing their BFA degrees. But for the songwriters, it’s nothing less than dizzying that their first off-Broadway show, Dogfight, finished its summer engagement at Lincoln Center’s Second Stage Theatre just weeks before rehearsals began for their first Broadway musical, A Christmas Story, which ran Nov. 5 through Dec. 30 at the Lunt-Fontanne Theatre.

“It’s very unexpected that it’s all hitting at the same time,” says Pasek. “It’s very overwhelming. But it’s funny to us—we’ve been working on both projects for a while. It’s an interesting disconnect because they’ve been in our heads for so long.”

Of course “long” is a relative term. Pasek & Paul started work on Dogfight in 2008, and were hired to write the music and lyrics for A Christmas Story in 2010. By most standards, the leap from page to stage has been fast. But that’s in keeping with the career trajectory of these musical wunderkinds, who had secured an agent by the time they were seniors at SMTD thanks to Edges, the acclaimed song cycle they began writing as sophomores.

Following its Ann Arbor premiere, Pasek & Paul took Edges on an East Coast tour. Next came YouTube, a viral marketing campaign, and a performance at Joe’s Pub in New York, all of which helped put Pasek & Paul definitively on the radar of some of Broadway’s top artists and producers, many of them U-M alumni. Next came the agent, and soon the show was licensed—a critical achievement that, as Pasek points out, is more important than a production in terms of income. Edges has since had more than 200 productions around the world. Just a year after graduating, Pasek & Paul won the 2007 Jonathan Larson Award, the first of several important monetary awards they’ve used to focus on their songwriting.

Following their early success, the team met many professionals who wanted to know what musical they were working on next. Unfortunately, they had nothing in the pipeline. Having spent most of their time promoting Edges, they realized, according to Paul, they needed to “choose a project and begin to cultivate our skills not just as songwriters, but as dramatists and as musical theatre songwriters.”

The result was Dogfight. The idea came from Peter Duchan, a high-school friend of Paul’s, who introduced them to Nancy Savoca’s 1991 film and wrote the book for the musical. Neither Pasek nor Paul had ever heard of the movie, but they were on board immediately. “The story just hit us right away,” says Paul. “It was an interesting way to tell a love story. Even just the two lines: ‘Marines deploy, everyone puts in 50 bucks, and whoever brings the ugliest date wins.’ You just know someone’s gonna get hurt, and there’s a lot of emotional content there to mine for a musical.” 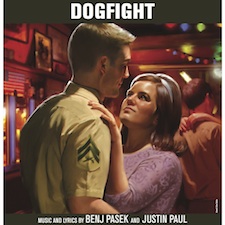 Set in 1963, the story explores cruelty and innocence as one of the young soldiers ends up falling for his “ugly date.” In the mining of emotional content, the songwriters struck gold with a gorgeous heartbreaker, “Pretty Funny,” sung by the female lead after she learns about the vile contest. Pasek describes the song as “one of the initial building blocks of the show”—it actually predated the script.

“We knew that would be a moment we had to capture with music,” adds Paul.

The song also got Lincoln Center interested, via a producer Pasek & Paul had met as undergrads. This led to a commission followed by the hiring of two-time Tony Award-winner Joe Mantello (Wicked) as director. Dogfight was well received during its summer run, with Pasek & Paul heralded for their songs. But the experience did little to prepare them for the jump to Broadway with A Christmas Story. “Broadway is a different stage and a different level of scrutiny,” Paul says. “It’s so exciting and so terrifying.”

Making the transition a little easier was the fact that the show was readied for its Broadway debut with a five-week run in Seattle in 2010 and a five-city tour in 2011, which Pasek describes as an “amazingly insightful” experience. “We got to see it not only over the course of two years, but with different audiences across the country,” he says. As a result, the musical, based on the 1983 film, has morphed tremendously since its first incarnation. 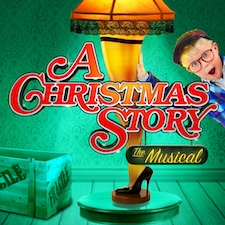 Being hired to write for A Christmas Story, rather than originating the show themselves, put the artists on a very fast track: The Seattle production debuted just eight months after they got the job. But the panic-inducing pace calmed a bit when they attended the first workshop, where they met the show’s music director, Ian Eisendrath, BMA ’03. “We were like, ‘Who is this guy? This guy is incredible. We feel like we speak the same language,” says Paul. “Everything we would have wanted the actors to do or to execute or to notice in the score and in their performance, he’s doing it and bringing it out in them. Who is he and where did he come from? Oh, he went to Michigan. OK, got it.”

It’s no coincidence such a strong U-M presence emerged in the show. “The SMTD graduates are the best that are out there,” says Paul. “We know the kind of training and education they’ve had, so if it’s a decision we’re involved with, we’ll always lean toward a U-M person.”

Pasek & Paul are finding the experience of working professionally with a former professor one of the “coolest and weirdest things.” For her part, Westphal is delighted but unsurprised by the success the team has met. She remembers, shortly after the debut of Edges, when Paul came to her office in a quandary, completely torn over what direction he should take in his career—singer, pianist, or songwriter? Westphal put her hands on his shoulders, told him to calm down, and said, “Justin, listen to me: Doors will open for you.” She wasn’t just placating him; given their enormous talent, she knew success was in Pasek & Paul’s future, no matter which path they took.

Now, having reached the holy grail of Broadway, the duo has proven her right. But even with this new level of success, pleasing their former teachers and mentors at U-M continues to matter deeply to them. They were thrilled to have superstars like Stephen Sondheim come to see Dogfight and pay them compliments afterwards. But that took second place next to the congratulatory note they received from Brent Wagner, chair of U-M’s musical theatre department, or the praise they continue to receive from Westphal for their smart musical choices.

“There’s something about your teacher saying, ‘I’m really proud of you,'” Paul says. “I don’t think there’s anything more meaningful than that.”

This story originally appeared in the Fall 2012 edition of Muse magazine.