The streakers of 1974 were hardly the first American students to run through public spaces with no clothes on. Impromptu nudism on U.S. college campuses dates back at least to the 19th century, when Robert E. Lee, as president of Washington College (later Washington and Lee), was said to have given his blessing to naked runs as a rite of passage.

But the country had never seen public nudity like the phenomenon that overtook U.S. campuses in that year when Richard Nixon’s presidency was spiraling down toward impeachment. Not that the two events were related. Indeed, streaking struck some as an uproarious effort to cast off the grim preoccupations of the Vietnam/Watergate years.

More than 20 years earlier, Michigan had set the trend in such affairs. (See “Panty Raid, 1952”.) But this time it was late to the race.

The first streakers of 1974 appeared at Florida State University in January, followed by imitators in Texas, Washington state, and Maryland. The national press began to notice in early February. Then, in the first week of March, streakers seemed to be everywhere, with dozens of episodes reported every day, across the country.

But that was the week of U-M’s spring break, so Michigan students missed the crest of that wave. By the time students returned to Ann Arbor, the spontaneous solo streaker was all but passé. Now you had to do something different, and Michigan’s answer was the mass streak. 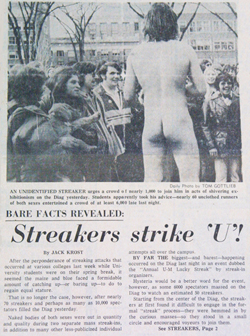 This story appeared on the front page of the Michigan Daily on March 13, 1974.

Casting spontaneity to the wind, organizers announced plans for competing events on Tuesday, March 12, the second day back from break. One outing was promoted as the “First Annual Ann Arbor Streak-In” (which an organizer insisted was the “official” event); it was to begin at 1 p.m. at Eden Foods on Maynard Street and race through the Nickels Arcade to the Diag. The other—the “First Annual Lucky Streak”—was to start on the Diag at 10 p.m., with a course to South and West Quads and back.

A crowd of a thousand or more gathered for the lunchtime event, but only five streakers—three men and two women—showed up, and two dropped out before reaching the Diag.

The cloak of night brought out far greater numbers at 10 p.m., but the streak nearly stalled in the massive crowd of onlookers.</>

At 10 p.m., some 70 streakers of both sexes shed their clothes at the center of the Diag and prepared to run. But so many people had come out to watch—The Michigan Daily estimated the number at 10,000—that the streakers were reduced to standing around in the cold and urging more students to join them. Finally they broke away, sprinted through the Undergraduate Library, and “inspired a rash of disunified streaks in all directions,” according to the Daily reporter.

It was a pretty big streak, but no match for the University of Colorado, which claimed a mass streak of 1,200.

A streaker enlivened the 1974 telecast of the Academy Awards.

Elsewhere, innovations continued all that month and into April—streakers on bicycles and roller skates; streakers in wheelchairs; skydiving streakers. At Michigan State, a naked form distracted a class on criminal sexual deviation. “Reverse streakers” raced through a Florida nudist colony in heavy clothing. After a streaker struck the telecast of the Academy Awards—host David Niven commented: “The only laugh that man will get in his life will be by stripping off his clothes and showing his shortcomings”—the naked wave finally receded for good.

Why all this happened was a matter of much debate. Commentators at both ends of the political spectrum claimed the streaker as an ally.

Marshall McLuhan, the philosopher and media theorist, suggested the streak was a symbolic blow at the burden of cultural hopelessness—an extension of the 1960s protest. He likened hippies to the medieval clown or court jester, then placed streakers in the same category of defiance. “The clown’s job was to tell the emperor or the royalty exactly what was wrong with the society,” he told an interviewer. “The clown … of our time is trying to tell us his grievance. The beards and the hairdos and the costumes are a manifestation of grievance and anger. You’ve heard about the streakers? [They are] a manifestation of anger about the lack of jobs and goals in our world.”

But conservatives cast the streaker as a culture warrior of the right, a carefree fellow thumbing his nose at student-radical seriousness and reconquering the college campus in the name of ’50s-style frat-boy fads.

“Who knows?” wrote George Will, then in the early days of his career as a conservative essayist. “Maybe these bumptious, cheerful streakers will ‘bring us together’ by bridging the generation gap: They could swallow fistfuls of goldfish and then streak into telephone booths. That is just what America needs to become a land fit for heroes: nostalgia buffs in the buff.”

Chris Parks, co-editor of the Daily that year, thought the streakers were a sorry sign of the demise of campus activism. The early ’70s at Michigan, Parks wrote at the end of that year, had been “a non-era.”

“I could fill several volumes with what didn’t happen on campus this year,” Parks wrote. “I search for something that did happen and find … Streaking. Streaking happened. It was in all the newspapers, on the television, and I even saw streakers one day on the Diag … My parents asked me if streaking was ‘some kind of protest or something.’ The idea had simply never occurred to me … But it seems safe to say streaking stems from a desire to shock or offend a ‘world-at-large’ which seems otherwise unconscious of our existence.”

Whatever the cause, there was no “second annual” iteration of either of U-M’s organized streaks. Of course, Ann Arbor’s “Naked Mile,” an April tradition from the mid-1980s through the early 2000s, can claim ancestry in the streak-ins of 1974.

Sources include The Michigan Daily and Bill Kirkpatrick, “‘It Beats Rocks and Tear Gas’: Streaking and Cultural Politics in the Post-Vietnam Era,” Journal of Popular Culture, 43(5) October 2010, 1023-1047.