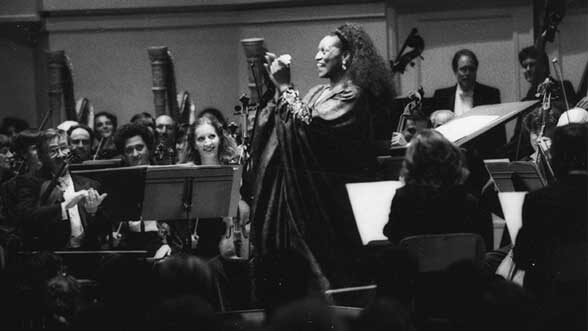 The new documentary about Hill Auditorium, A Space for Music, A Seat for Everyone, also could be called An Embarrassment of Riches. The compelling film is the product of a huge and multifaceted on-campus archive that will impress the most diehard historians and delight the most nostalgic sentimentalists.

Turn-of-the-century Ann Arbor springs to life through rarely seen film footage of the earliest performers, patrons, and University leaders who first breathed life into Hill Auditorium. Vintage stills and moving images of the fashions, the town, and the campus (including interiors of the original University Hall) are just a few of the visual treasures included in this 57-minute tribute to one of the greatest music halls in the United States. Recordings and testimonials from artists like Rosa Ponselle and Leontyne Price, and news clippings, ads, menu cards, and programs for every single event presented by the University Musical Society (UMS) since 1879 are just some of the archival elements filmmaker Sophia Kruz, BA ’11, used to tell Hill’s story.

“The scope was definitely huge,” says Kruz, who served as producer, director, editor, and co-writer on the film. “My problem was not deciding what was the very best thing to include in the film, but what to leave out.”

A Space for Music, A Seat for Everyone chronicles the first 100 years at Hill Auditorium. The movie is available to Comcast Digital customers via On Demand through June, and can be streamed now at the UMS website or viewed in its entirety below. It aired on Detroit Public Television May 19.

In addition to mining the plethora of supporting material available at UMS and the Bentley Historical Library, Kruz interviewed some 40 people—artists, longtime Ann Arbor residents, former Hill and UMS staffers, and current students—about their impressions of and affection for the historic venue.

“Common themes emerged that drove the storyline,” Kruz says, from how people felt in the hall to the wonderful acoustics. “And while we all have similar experiences, each person we spoke to had their own very personal and deep connection with Hill. There are a lot of ways to tell the history of the hall, but our goal was to tell the universal story of our community within the hall itself.”

Set against a century of U.S., regional, and Ann Arbor history, the film illuminates sociopolitical themes by way of classical, opera, jazz, cabaret, choral, and rock performances, as well as dance. Through it all, the viewer sees Ann Arbor and its residents transform with the times.

Kruz was particularly thrilled to discover moving images of the parties at Barton Hills Country Club celebrating the earliest iterations of the UMS May Festival. The multi-day event actually opened Hill with its 20th annual celebration on May 14, 1913; it ran through May 1995. Once upon a time, the festival drew residents who would train in from points across the state, crowding the streets in a way that could be compared to the modern-day Football Saturday. But in this case, patrons were wearing long skirts and cloche hats, suits and spats.

“That visual was very striking to me,” Kruz says, “and that footage was a gold mine.”

Kruz also discovered a box of menu cards penned by hostess Alva Gordon Sink, wife of longtime UMS President Charles Sink. It was Charles Sink who brought Enrico Caruso to campus in 1919, and it was Alva Sink who ensured every visiting artist enjoyed his/her time in Ann Arbor. She kept copious notes regarding guest lists and the dishes she served to performers and dignitaries, citing which meals they favored or rejected.

“Alva was well known for her parties and connecting people,” Kruz says. “That box held a very specific record of events that is completely amazing.”

Music, magic, and a seat for everyone

Kruz, a graduate of U-M’s Department of Screen Arts and Cultures, currently is the video producer and editor at UMS, chronicling modern-day performances at Hill. Producing the documentary has given her new perspective about her own process and what she is recording today that will be of value to future historians. She’s worked on productions for E! Entertainment Television and the Clinton Global Initiative. She also worked in marketing for the PBS series “POV.”

But the documentary about Hill’s first 100 years is particularly meaningful to this alum and Ann Arbor native. When A Space for Music, A Seat for Everyone initially premiered inside Hill earlier this year, Kruz was unprepared for the emotional impact it would deliver.

“It was an incredible moment when the lights went down and the movie came up,” she says. “We were all experiencing the history of the hall in the hall itself. That was so special. So much of the film is focused on the community, and it gets you to think, ‘How many other people in the audience right now have had these same experiences?’ I didn’t realize that would be so powerful for me.”